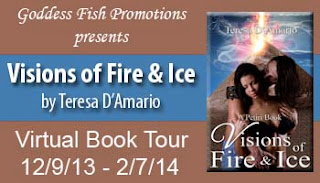 Trapped on a planet not their own, the Petiri spend their lives hiding the natural gifts that set them apart from the world.  They live long and unfulfilled lives, unable to find their soul mates on this backward planet known as Earth.  That is until the night Ramose comes face to face with Tamara, a woman whose gifts rival his own.  Determined to find why this human is in possession of an ancient magical Petiri relic, he arranges a meeting.

But Tamara, embittered from past events, is wary despite lifelong dreams of Ramose and a sure knowledge he is her soul mate.  Before long the couple find themselves ensnared in a battle that has raged for millennia in Egypt’s desert.  Set, Egyptian God of Chaos, is determined to take his just due: the throne of Osiris.


The only way to stop him is for Ramose to put his trust in Tamara, but first must gain the same from her.  The ensuing sensual relationship is filled with romance, lust and love.  Their relationship is tested by an unnatural evil. Will her powers over fire, combined with his ice be enough to win the day?  Or will the ancient gods and goddesses of Egypt destroy more than just their love?


Tamara pulled out the costume with a grin. It was red. Fire red. Small bits of orange peeked beneath the folds, enhancing the image. This would be perfect for her youngest sister who always teased her about the fire she herself wielded. She held the costume before her, judging its size. A spark of energy caught her attention, and she raised her eyes to Ramose. He was moving toward her, his muscles tight, his face pale in the darkened light. But his eyes, they burned with unfettered need.

Tamara swallowed. Hard. Never in her life had she expected to see any man, much less Ramose, look at her the way he did now. What had she done to trigger such a response? Maybe he thought shopping was sexy. Hell, it didn’t matter. He had the look of a man ready to cross to the next level in their relationship. No, not the next level. He looked ready to leap all the way past and into a new relationship. His eyes were filled with need, but other emotions glimmered beneath the surface. Possession. Relief. Stark, irreversible hunger.

Before she could utter a word, he was there, pulling the dress from her fingers, handing it to the shopkeeper still standing beside her.

Ramose totally ignored him, his focus glued only on her. Never had he seemed so tall. Powerful. And even imposing. Tamara stepped back. Just moments before, he’d stood across the room, silent, watching. Now his scent whispered over her, dark and sensuous. Her blood rushed through her veins, heating her body in response. She bit her lip at the sudden onslaught of emotions and need building inside her. Inside, her heart fluttered in panic, while the rest of her body yearned for him. She was part rabbit, part tigress. She was terrified. She was starved.

Ramose leaned forward, his lips brushing against her ears, his breath feathering across her neck.

Mine, her mind translated.

Tamara’s heartbeat spiked, and her knees weakened. She grabbed the clothing rack and struggled to breath, yet it was impossible. Not with him so close. So hungry. Did he suddenly recognize her as his soul mate? Did he have that skill as well? She tipped her face to meet his gaze. Heat coiled low in her belly. His scent stripped her of her desire for control. The fear fluttered inside her, yet she ached for more, to feel his lips against her flesh.

The hard lines of his jaw, shadowed by the late afternoon beard, combined with the power surging from his being, gave him the look of a warrior of old. Demanding. Powerful. And sexy as hell.

Her body moved of its own accord, leaning forward, blending his heat with her own. Muscles inside her softened, melting, while others drew taut, hungry for his touch. Her lashes fluttered, her eyes heavy, her mind and body drugged by this man’s desire.

But he wanted none of her words. His eyes silenced her, as though he were afraid she’d reject him. Long, warm fingers closed over hers. It was the first touch of what she hoped was soon to be more. The pulse in her throat beat a rapid staccato message. Need. Fear. She wasn’t even sure which held more power.

When the shopkeeper returned, Ramose held out his hand, not even looking at the man. His fingers closed around the plastic bag, and, without a word, he turned, escorting her out the door.

Once outside, they moved past the small shop, pressed inward by the throngs of people surrounding them. He didn’t seem to care. He stopped, right in the middle of crowd, tugging her hand until she turned to face him. His eyes raked over her, searching. With calloused fingers, he brushed away the wisp of hair now falling in her face. The heat from his fingers burned her flesh, regardless of his gift of ice.

The word was so soft, so worshipful, she had to strain to hear it. Tamara shook her head. “What, Ramose, what is it?”

“Nanik,” he whispered again, his gaze softening, offering her a smile of wonder.

Oblivious to the crowd surrounding them, Tamara’s knees wobbled. She should be running, racing to her hotel to block away the world. This was too fast. Too dangerous. And, yet, the sudden possessiveness in his response only built the hunger inside her. Her gaze moved to his lips.

She wanted to feel him. Against her mouth. Hungry. God, what was wrong with her? His arm hooked about her waist, and, as his head lowered, she tipped her face to meet him. Wanting. Breathless.

His gaze held hers, even as his face inched closer.

When at long last their lips met, her heart, the one she was sure had quit beating, exploded in her chest, pounding as though to crack her ribs. The exquisite heat of his lips burned against hers. Oh, God. Please. Please what?

He groaned when she wrapped her arms about his neck, drawing even closer to him. He swept his tongue over her lips. She needed no further encouragement. For the first time in her life, she didn’t hesitate when a man touched her. She opened. And, when their tongues met, it was divine.

The inside of his mouth was hot and hungry, his taste an explosion of wild masculine heat, and, yet, he swept in slowly, as though in wonder, tasting her. The chill of his mouth drew her, cooling the overwhelming heat burning inside her. The combination of need and gentleness sent a shudder of hunger through her body, and she wanted more, needed to crawl even closer.

Born in Atlanta, the daughter of an Army Soldier during the early stages of the Viet Nam war, I spent my childhood traveling from state to state, finally ending up overseas in Germany where I graduated high school six months early.

My writing career however began as a young Airman in the Air Force, writing monthly articles for the weekly base paper.  The articles ranged from climatological data to full center fold articles on the destructive forces of hurricanes.  As I increased in rank, my writing changed to more technological instruction, including such works as  WSR-88D Doppler Radar Data Interpretation Guide for North Carolina Stations, and Station Operating Procedures.

But my early writing wasn’t limited only to the technological side.  I’ve written multiple dog training and behavior articles for canine websites such as Sonora Canine Freestyle, and also the Ask Blackjack column, a fun training column in the voice of my labrador retriever, then a young pup.

I’m married to a wonderful man named Doug, who is also retired Air Force.  We live in North Carolina with our two dogs.