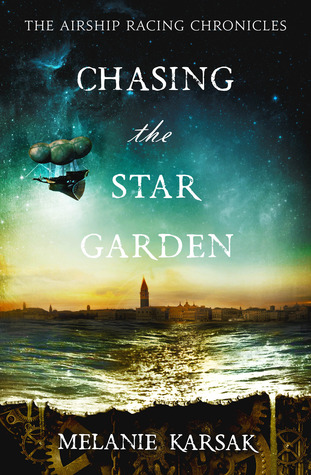 
An ancient treasure about to fall into the wrong hands.


Melanie Karsak’s “Chasing the Star Garden” takes the reader on an exciting adventure from the gritty opium dens of gaslamp London to the gem-colored waters of the ancient world, introducing us Lily Stargazer, a loveable but reckless airship racer with a famous lover and a shattered past.


Lily Stargazer is having a bad day. She just lost the London leg of the 1823 Airship Grand Prix. To top it off, a harlequin fleeing from constables shoved a kaleidoscope down her pants, told her to fly to Venice, then threw himself from her airship tower.


What’s a girl to do? For Lily, the answer is easy: drink absinthe and smoke opium.


Lily’s lover, Lord Byron, encourages her to make the trip to Venice. Lily soon finds herself at the heart of an ancient mystery which has her running from her past and chasing true love and the stars along the way.


Melanie Karsak grew up in rural northwestern Pennsylvania where there was an abysmal lack of entertainment, so she turned to reading and hiking. Apparently, rambling around the woods with a head full of fantasy worlds and characters will inspire you to become an author. Be warned. Melanie wrote her first novel, a gripping piece about a 1920s stage actress, when she was 12. A steampunk connoisseur, white elephant collector, and caffeine junkie, the author now resides in Florida with her husband and two children. Melanie is an Instructor of English at Eastern Florida State College.


Hi Melanie :) Glad to have you here.


Thank you so much for having me. I’m delighted to talk to your readers about my new novel, Chasing the Star Garden. I was so much fun to write and the protagonist, Lily Stargazer, is near and dear to me. I hope fans embrace her as well.


Now, to start, what inspired you to write "Chasing the Star Garden"?


A mess of things but mostly clouds. I love Romantic Gothic writing and have always been interested in Lord Byron. Then, about three years ago, I started reading Steampunk. I have always liked Jules Verne and HG Wells, but I was new to Steampunk. Once I discovered the genre, however, I was in love. I knew I wanted to write a Steampunk series and that I wanted Lord Byron to be a focal point, but I didn’t want to tell his story. I wanted someone unique, a little broken, yet very talented. I live in Florida, and the clouds here are really amazing. I have never seen anything like them. I conceived of Lily, a woman most at home amongst the clouds, a place where she could hide from her problems . . . in other words, an airship pilot, but not just a pilot, a racer. All of these elements combined, and I ended up with an opium-addicted airship racer.


Chasing the Star Garden is a gaslamp romantic adventure that can be best described as Dan Brown meets Mary Shelley.


Describe Lily and Lord Byron in 3 words each.


Lily: Talented, Loving, Shattered
Byron: Running, Confused, Passionate
I’m going to add in another character, Sal, who is one of Lily’s lovers. He plays a major role in this novel.
Salvatore: Genius, Careful, Tender


Do you have a writing process? Are you o plotter or pantser :P?


I love the last scene of the book. It was so much fun to write a character with such tremendous courage.


What research did you do for the book?


Tons. I bent history a lot, but I tried to be accurate where it mattered. In essence, the book is an alternative history, and I am starting the novel a good 50 years before most Victorian Steampunk settings. As such, some inventions featured in my novel appear earlier than the earliest inventions. Does that make sense? I have a full world developed in my head, but the first novel in this series is focused on Lily. In the second novel of this series, I get more into the history of her world.


Always! I remember writing my first play when I was in 5th grade. It was about a mafia lounge singer named Emerald Sky. What kind of 5th grader writers something like that? I wrote my first novel when I was 12, my second novel, a god-awful cliché ridden mess, when I was 16. I have always written, but I haven’t always been a decent writer.


There are so many amazing authors, but my go-to author is Marion Zimmer Bradley, particularly the Mists of Avalon. Bradley’s works are what inspired me to really want to be an author, not just a writer.


I am working on a short story that is situated in time as a prequel to Chasing the Star Garden. I am planning on releasing that on my blog. I am also ramping up to write book 3 of The Airship Racing Chronicles. Book 2 is currently being edited for a late winter/early spring release.


Do you prefer the sea side or the mountains?
Seaside


Thanks for stopping by Melanie and have fun writing :).

a Rafflecopter giveaway
at December 19, 2013