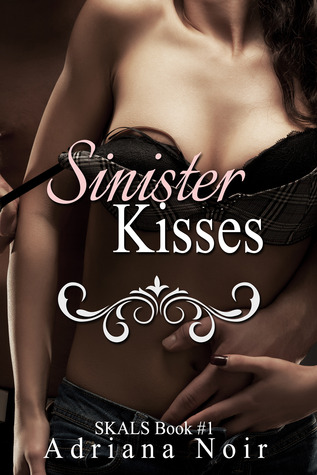 After a chance encounter in the woods leaves her shaken and reeling, the last thing Taylor McAvay wanted to do was accept an invitation to dinner. Then again, after seeing what Sebastian Baas was capable of, she felt she had little choice. The guy did just save her life, and the feel of his partner’s assault rifle pressed against her cheek still lingered in her mind.


What she discovers surprises her. Beneath the armor and fatigues, is a smart, attentive, and sophisticated man. Unable to resist, Taylor finds herself drawn in by the Special Agent’s charm. Everything about Sebastian, from his imposing presence to his hypnotic eyes, pulls her under his spell. When a drive by shooting leaves her apartment riddled with bullets, she falls under his command as well—not to mention the shadow of a lethal, underground organization known as SKALS.


Her lover has a dark and dangerous side he tries to keep hidden, but when a series of events sends their lives spiraling out of control, she realizes there is much more to him than meets the eye. Whether she wants to leave or not doesn't matter. Taylor soon learns, when it comes to Sebastian and SKALS, there is no escape.

Viewer Discretion Is Advised: We didn't like the story, our review will reflect this.


Aly: Hi guys. We hadn't had a buddy review in AGES! We're going to delight you with a lovely novel that I gave up on at 18% Maru soldiered on and finished it. Maru love, I am curious: why didn't you just give up on it?
Maru: Hahaha...because you know me, I love disasters. And I wanted to know where the plot led the characters
Aly: But... but... this was a disaster wrapped into a catastrophe with a dash of stupid!
Maru: Yes it was!! But dude, hello, I read the two books from Gabriel´s Inferno...so yeah...I can read anything
Aly: That's true :)) Anything you actually liked from it? I didn't :D
Maru: No, I thought the story might improve as I turned the pages but no
Aly: I couldn't FIND the story! It was a jumbled mess in there...
Maru: I didn´t like the guy being a CIA agent who tortures his enemies and whoever gets in his way and everyone around him is afraid so they just fly with it.

Aly: That's what he was? In a moment there I was sure it was a PNR :))
Maru: I thought so too!!! But no, I couldn´t connect with the story
Aly: And I remember his A-hole friend that was even worse. I can't say even a nice thing about the whole book.
Maru: and the "heroine"????
Aly: She was an even bigger mess!
Maru: OMG!!! What a moron!! Would you go out with a guy whose friend was about to kill you? Hell no! You run on the opposite way and move out of town!
Aly: She had air instead of a brain. I hated that she kept putting herself down when he was getting in the smexy time mood, I was like: "seriously?! Stop it you idiot!" And when she wan't weirder out about the fact that he knew where she lived and that he checked her out. She was so, so stupid...
Aly: Or lord, at the start when she accepted the date with him 5 minutes after almost being killed by him! Who does that?!
Maru: Yes, I don´t know why some authors write about girls to think so low of themselves that they agree to stay in a relationship with someone who dictates their every move
Aly: It was creepy!
Maru: SUPER CREEPY!!! With shouty capitals!!! (to quote another character who get on my nerves)
Aly: :))
Maru: Would you please share some of your amazing quotes??
Aly: I even have a quote saved from it with the perfect example of what a dysfunctional relationship looks like. You got ahead of me :))) Here it is!
Maru: *claps hands anxiously*
Aly:
"I trust you Sebastian. I'm sorry."
"Then don't question my actions again." He lifted her head[like how would you do that?! She was frigging standing], his face questioning when a tear slid over her cheek to splash against the back of her hand. "Why are you crying?"
"I don't want to lose you."

Aly: I was so very mad when I read that. Do you know how much chocolate I had to eat to get through those 18%?! I should be compensated :))
Maru: LOL, any excuse will do for me to eat chocolate too!!
Aly: It was like medicine
Maru: It was what got us through this book!! I really don´t have anything else to say…
Aly: I jumped ship fast
Maru: LOL and just kept eating chocolate
Aly: Me neither. I think it's perfectly summed up by this: no story, no characters, no plot, just some words thrown in.
Maru: And the sex was not good either

Aly: I'll be giving it my 0* rating
Maru: Me too...not my kind of book so no rate. Thanks everyone for joining, we hope next time to have a better book to review...*cough* Aden by DB Reynols *cough*