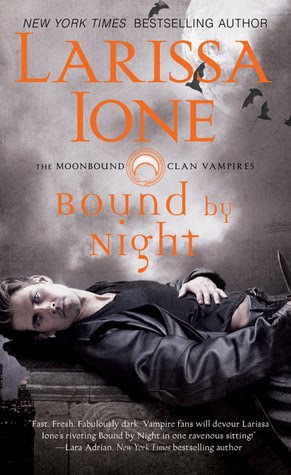 The first installment in a sexy new paranormal romance series by Larissa Ione, author of the bestselling Demonica series!

A WOMAN OUT FOR BLOOD
Nicole Martin was only eight years old when the vampire slaves rose up in rebellion and killed her family. Now she devotes her life to finding a vaccine against vampirism, hoping to wipe out her memories—along with every bloodsucker on the planet. But there’s one thing she cannot destroy: her searing, undeniable attraction for the one man she should hate and fear the most . . .

A VAMPIRE OUT FOR REVENGE
A member of the renegade vampire MoonBound Clan, Riker is haunted by demons of his own. When he recognizes Nicole and remembers how her family enslaved his loved ones, his heart burns for vengeance. But when he kidnaps Nicole and holds her in a secret lair, his mortal enemy becomes his soul obsession, his greatest temptation, and, perhaps, his only salvation—a hot-blooded lover who could heal him with her touch . . . or bury him forever.

Why I added the book: Larissa Ione. Dooh.

What I Liked: Where do I start? The first scene of the book is a horrific one and it has you thinking? Do I really want to read on about these crazy vamps who murdered everyone and hurt children? But you’re so caught up in the action and want to know what happens to Nicole and her family and the escaped vamps that you just can’t put the book down! After that scene fast forward 20 years or so and you see Nicole grown up and kidnapped. That really got me hooked! I really wanted to see how Ms. Ione could make her fall in love with her kidnaper and not make it look like a bad portrayal of Stockholm syndrome. And boy, she so did!
The book is fast paced and the world is really interesting and terrifying. 100 years or so vamps came out of hiding and since people are known for their tolerance and acceptance a few years after that they are hunt down and enslaved. They are now used like house servants, research material and, IMO one of the most degrading things, anti-aging serums and in sex trade. To make matters worse Nicole is actually the CEO of one of the biggest companies that research and “train” vampires.
I would say more but then you wouldn’t be tempted to read it, and trust me: it’s a great book.

What I didn't like: The only thing that I didn’t love in the book was Riker’s stubbornness to live in the past. In my opinion, it went on for too much time.

Favorite character: Myne. He’s a heartbreaking character, but what I like most about him is that even though he was mistreated and a lot of bad stuff happened to him he can still feel empathy. Besides, he is hot :D

My least favorite character: Creepy leader from another vamp clan. He’s just ew! And he sure hasn’t heard of women’s right and how to treat all human beings with respect.

Favorite scene: When Nicole goes to him when he’s all tide up. I would say more but it’s a MAJOR spoiler, you just have to trust me on how good it is.

Would I recommend the book: No question! It has adrenalin filled moments, redemption and hope, humor and heartbreak, everything you would like in a book. Better yet, it’s the 1st in a new series that I know will have many on the edge of their seats.

ARC courtesy of Pocket Books and Edelweiss
at September 18, 2013