I chose a quote from A Mackenzie Family Christmas: The Perfect Gift (Highland Pleasures #4.5)  by Jennifer Ashley[great series]. 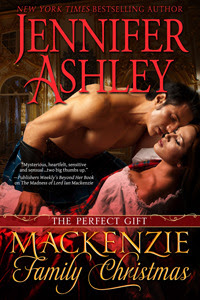 "How's the family, then?" Isabella entered the room an hour later, bringing in the family that had been kept out. Ian watched them from the sofa across the room, where he sat with Beth.
Mac came behind Isabella, then Ainsley and Cam, Eleanor's father, and Daniel, and with them the Mackenzie children. Ian rose to take Belle from Daniel's arms. He kissed his daughter, remembering every detail of his worry the night Beth had brought her into the world, and before that, when Jamie had come. Hart had just gone through the same ordeal.
Hart sat on the bed, his back against the headboard, his arm around Eleanor. The midwife had finished the rest of the birthing and washed the child, and the wet nurse had given him his first meal. Ian and Hart had been persuaded to step outside for the procedures, and once he'd walked out of the room, Hart's legs had buckled, and he'd nearly fallen to the floor.
Ian had caught him, holding his older brother upright in his arms, until Hart had regained his strength.
Darkness still prevailed outside, but bonfires broke the blackness, the villagers getting started on the Hogmanay celebrations. Inside Hart and Eleanor's bedchamber, all the lamps glowed, and the fire burned high, lighting up the scene.
"Hart Alec Graham Mackenzie," Eleanor's father, Alec Ramsay, was saying. He tickled the baby's cheek. "What a splendid name for a splendid little fellow."
They'd call him Alec in the family, Hart had said, in honor of Eleanor's father. Small Alec was now dozing in his mother's arms, breathing well, proclaimed healthy and strong by the midwife and the doctor who'd visited after the messiest bit was finished.
Hart looked as though someone had kicked him repeatedly. Exhaustion stained his face, his eyes red-rimmed, but his smile was strong and as arrogant as ever, as though he'd just done something uncommonly clever.
Ian's brothers shared Hart's pride, holding up their own children so they could greet their new cousin.
"He's very small," Jamie informed Ian. "He won't be able to ride his pony."
"He'll grow." Beth rumpled her son's hair. "In a few years, you'll be racing him."
Jamie looked doubtful. "He's even smaller than Belle."
"Not for long, I wager," Daniel said in his deep voice. "Mackenzie men grow tall." He pressed a fist to his chest and laughed down at Jamie.
Bellamy and Curry carried in trays of wine, whiskey, and champagne. Hart grabbed a glass and drank heavily, this time keeping it down.
The others raised glasses in a toast. "To the newest addition to the family," Mac said. "God help him."
"He's our First Footer," Isabella said, lifting her champagne glass. "The first into the house for the New Year."
"To the First Footer!" Mac and Daniel shouted. Glasses clinked, and champagne disappeared.
"You've lost your bet, Uncle Hart," Daniel said. "Forty guineas you owe me, I think."
"Hart, you rogue," Eleanor exclaimed. "You told me you didn't think it was proper to wager on your own child."
Hart shrugged. "I thought I had a good chance. I'll make good on my bet."
"Well, I've won quite a packet. Haven't I, Danny?"
"Ye have, Auntie. As have I. I always trust the mother."
"Mother." Eleanor held Alec close. "That sounds nice. And here is Papa."
She handed the baby to Hart. Hart took him, his expression softening to wonder, everything hard in him suddenly gone.
The others raised glasses once more. Ian put his arm around Beth and sank into her warmth, hefting his daughter in one arm, while his son sat happily in his mother's. This time next year, their little family would be larger, and Ian's happiness would expand yet again.
"They change you," Ian said to Hart. "We're not the same now."
"Bloody good thing," Cameron rumbled.
"Aye," Hart said. He leaned to his wife. "Thank you, El, for saving my life."
Eleanor winked at Ian as she leaned to kiss Hart's lips. "You are most welcome, love."

I miss the Winter holidays so I chose a quote from one of the best Christmas related book.

Amazingly, it's free on Amazon, B&N, Itunes and Kobo.  Buy it as fast as you can!