Quote-Tastic(4): "Always On My Mind" by Jill Shalvis

This week I chose a scene from a contemporary I finished a few weeks ago. It's from one of my favorite contemporary authors, Jill Shalvis : 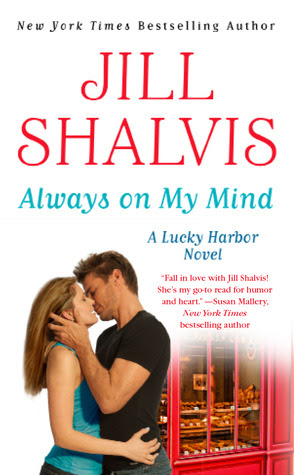 She smiled and handed him a small white bag. “Happy birthday.”

He should have known she would remember. She always remembered. “What is it?” he asked cautiously. And with good reason. One year, she’d gotten him a gift certificate for a spa treatment that had turned out to be for a male Brazilian wax. He’d never cashed that one in… Another year, she’d left him a pair of really huge women’s underpants on his truck antenna out in front of the station along with a “love note” from a secret admirer. That one had taken a while to live down.

“Open it,” she said, sounding far too innocent.

“Do I need insurance first?”

“Maybe it’s just what you wanted,” she said.

What he wanted was her in his bed wearing nothing but those sexy shoes. He started to open the bag, and Kevin moved in close, licking his chops hopefully.

“You already got yours,” Jack told him.

Leah laughed, the sound going a long way toward reviving Jack. Shaking his head, he opened the bag. Cream cheese croissants. “I like the lack of public humiliation with this one,” he said as he pulled the first one from the bag.

To read more about the series and the author visit Jill's website.
at October 07, 2013