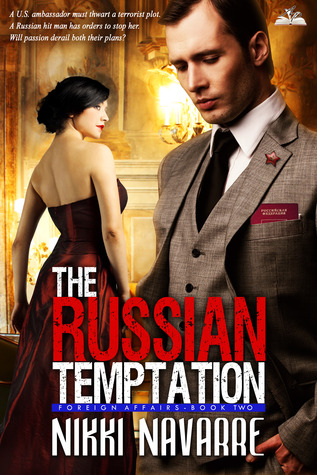 She wants the truth. He wants her.
Ambassador and scientist Skylar Rossi is determined to expose security breaches in an illegal Russian chemical weapons plant. Her mission is personal. She’s spent a lifetime atoning for the sins of her father, an international arms dealer. But the moment she steps off the Trans-Siberian train in Khimgorod—a city that doesn’t exist on any map—she’s alone, isolated and deep in enemy territory. She can trust no one, especially her so-called security escort, the refined and lethal Nikolai Markov.
Ex-KGB agent Nikolai Markov’s assignment is to keep Russia’s dirty little secrets out of Skylar’s hands…by any means necessary. But Skylar Rossi is more than just the mark. She’s responsible for his brother’s death and it’s payback time. So why is he suddenly feeling protective about a woman he might have to kill?
The stakes quickly turn deadly, and Skylar needs Nikolai to keep her safe. But their own chemistry may be far more dangerous…

I am so happy that I went with my baser desires and read this book! I clicked for the ARC because the male character was Russian and I am shallow :D This time my one-clicking based on that didn’t let me down!
The book start with Skyler, the heroine, just arriving in one of Russia’s closed cities*(I am being nice calling it city). She’s a scientist, but thanks to her job she gained diplomatic status. She’s investigating chemical weapons plants in the ex-URSS. After she steps off the train, the welcoming comity headed by Nikolai Markov(the hero) is trying to determine her to leave. That doesn’t work, Skyler is determined to find out if anything that shouldn’t be happening takes place there.
Nikolai Markov, ex KGB, who’s name isn’t actually Nikolai Markov, is actually a contracted assassin/spy. His job is to make our heroine leave and stop her unwanted questions.  Besides this job he has a personal vendetta against her: he believes her the one responsible for his brother’s murder.
You can imagine how thing will go from there: we have some illegal searches and surveillance, a few car chases, a fire, a few death threats, assassins… In other words: a fascinating story filled with action and unwanted emotions!
I enjoyed reading this book, it was almost perfect! The only thing that got on my nerves was the over use of the word dancer, I swear it was used to describe Skyler’s(her mum was a ballerina) figure, her legs, her walk, her grace, it was EVERYWHERE! I have to say though, that after the first 30% I stopped noticing it, I was just too caught up in the story!
The emotions between the 2 developed fast, but I can see how that happened. They were in each other’s company 24/7 for more than 5 days and he kept saving her life… Additionally all that adrenalin did make everything more sharp.
I like how Ms. Navarre concluded Skyler and Nikolai’s story: she kept them apart for 2 months, to let them be sure of their feelings and thoughts. She didn’t marry them after a few days after they met, it made the HEA more believable for me.
All in all I recommend this book whole-heartedly and I’ll definitely read more novels by this author.
Rating:

*Closed city: it’s not on the map and nobody’s supposed to know about it… satellite imagery screwed those up :D
Also in the series: