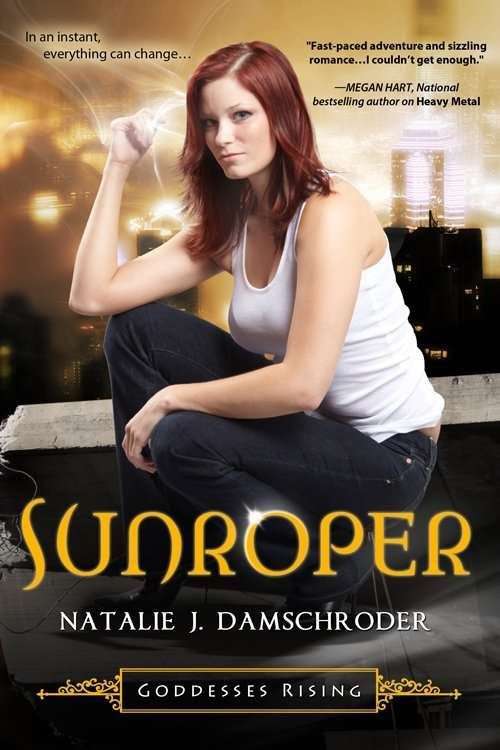 Marley Canton is done being a victim. A year and a half has passed since she discovered her ability to nullify power in those who aren’t supposed to have it. She’s now on a quest not only to stop the brats who’ve become addicted to goddess power, but also to find the source of their addiction.

Like Marley, Gage Samargo is tracking down the goddess who went rogue decades ago. Insane with too much power from the sun, she’s selling that energy to Gage’s younger brother and his friends, who are no longer content to come into power naturally. While they work to find a way to neutralize the goddess, Marley discovers that every time she nullifies someone, she takes on some of the goddess’s insanity.

Gage falls for Marley’s sharp wit and intense desire to right wrongs. But once he discovers she’s turning into her enemy, is it too late to back away?


Interview
Hi Natalie :) Glad to have you here.

Now, to start, what inspired you to write the "Goddesses Rising" series?


I love writing paranormal, but I didn’t want to do what everyone else was doing. That meant avoiding vampires and shifters, yes, but I liked the idea of modern-day goddesses, and several authors have brought the ancients into our world very successfully. So I thought, what if they were descendants of goddesses?


I also wanted to do a romance that was a little more suspenseful in its own right. Lots of romances have “the other guy” who isn’t really worthy of the heroine. What if “the other guy” is just as heroic?


The trilogy is about three goddesses taking control of their power to save themselves and the goddess community, and it’s about the all-too-human men willing to sacrifice anything for the women they love.
Under the Moon has a heroine who is very comfortable with her abilities, but she longs for a man she simply can’t have. Nick bears the weight of his family’s legacy, but his main goal is protecting Quinn.
Heavy Metal’s heroine never knew she was a goddess, so she’s struggling not just with her power, but with those who want to take it from her. Sam has lost his purpose, but Riley’s plight might help him find it again. And maybe heal his broken heart along the way.
In Sunroper, Marley has lost her powers but has refused to let herself be a victim any longer. She’s seeking redemption and working behind the scenes to protect the goddess world she doesn’t really belong in anymore. Gage represents the other side of a tense standoff, but he might be able to convince Marley she deserves happiness, too.

Describe Marley and Gage in 3 words each.


Marley is damaged, determined, and lonely.
Gage is a loyal, charismatic leader.


The final battle scene. That’s when things are flying all over the place, people are fighting for their survival and the survival of uncountable innocents, and the enemy is truly insane. You can do a lot with someone who’s insane, especially if you can also understand them and care about what happens to them.


I also had fun writing this scene because it brought together almost all the main characters in the trilogy, and it was as full of emotion as it was action.


What did you find most challenging in writing the book?


Revisions! My editor was awesome, finding the core in the story I’d written and pushing me to go deeper, stronger, tighter. The deadline was a huge challenge, but all of that makes the results so much more satisfying.

Who is your favorite character you have ever written?


God, that’s a hard question. It’s always the one I just finished writing! LOL I really can’t pick one, but I’m going to go with Nick Jarrett from Under the Moon, because I love his relationships with everyone around him.


The moment when vague intentions click together and the resulting scene flies out of my fingers, and I know it’s good because it’s making me laugh or cry or both. The exhilaration makes any challenge or disappointment so worth it, especially if readers later describe feeling the exact way I did when they read the scene.


How do you deal with writer block?


Ugh. First I try to force through it, which is like those dreams when you try to run and can’t get anywhere. Then I walk away from it to let it “percolate” in the back of my mind. When too many days pass, I go back to the forcing method. Usually it breaks free at some point. I often get the “ooh, that’s it!” idea in the shower or while driving. Sometimes I have to try methods I don’t usually use, like brainstorming or mindmapping or other author tools. Something eventually does the trick. :)


Not usually. It distracts me too much, especially if it’s not instrumental. I do have a playlist of my favorite movie soundtracks (Lord of the Rings, Pirates of the Caribbean, Elizabethtown, etc.) that I listen to when I’m in a more public area and need to block out the enticing noises around me. Most often, I use this when I’m on my annual writer’s retreat. Otherwise, we’d just have fun all day long and I’d get no writing done. LOL


I guess you could say I did, though I didn’t always know that I wanted to. I’ve been a rabid reader since I was four, and I wrote short stories when I was very young and movie treatments when I was a little older (then I’d act them out with my best friend). When I got to college and a theme developed of being told that I had a talent for writing, I realized I could write romance, something I actually liked, rather than nonfiction and term papers.


Some of them do. My husband loves to tell people about them, but he’s only read two. My father-in-law reads them all and buys tons of copies to hand out to everyone he knows. My 90-year-old grandfather reads them on bus trips from Pennsylvania to Massachusetts, and one of my nieces recently said she was going to read my books, though I’ve been afraid to ask if she actually did. :)


Again, another impossible question! LOL So, so many. I love Suzanne Brockmann and JD Robb, Joss Ware and Jody Wallace, MJ Fredrick and Shannon Stacey, Roxanne St. Claire and Megan Hart, Elizabeth Norris and Rosemary Clement-Moore. That doesn’t even begin to touch the list of favorites!


Favorite books…I tend to look at this question as “which books do you read over and over,” and I have to admit, there are too many good ones I haven’t read yet for me to re-read them anymore. But I do listen to Harry Potter every year, after the football season is over and I can’t handle listening to football podcasts anymore.


I was lucky to have no deadlines over the holidays, so I’m looking at what to do next. I have Hearts Under Siege, a romantic adventure/best-friends romance coming out in February, so the finishing touches are going on that. I have a couple of partially finished projects I need to revisit, and the next book in The Soul Series has been glaring at me all year for my lack of attention.


These always make me sound wishy-washy, because I can never pick one! LOL


Tea or coffee? Café mocha in the morning, tea the rest of the day.
Do you prefer the sea side or the mountains? I love both, but the beach has the edge. Nothing else makes me feel the way the ocean does.
Sweet or salty? First salty, then sweet. Like, fresh-popped popcorn followed by a bowl of ice cream.
Print or ebook? I read both, but ebooks have the edge for convenience.
Movies or TV shows? I watch more TV, but the movie-going experience is one I hope I never have to give up.

Natalie J. Damschroder writes high-stakes romantic adventure, sometimes with a paranormal bent. She's published ten novels, seven novellas, and fourteen short stories, many of them exploring magical abilities, but all with a romantic core. She currently lives in Pennsylvania with her perfect partner of a husband and two amazing daughters. Learn more about her at her website.


Giveaway
$25 gift card to Spa Finder and trilogy book charms
a Rafflecopter giveaway
Ends on the 31st January
at January 03, 2014