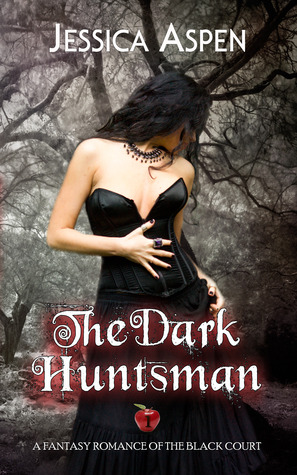 An evil queen, a dangerous man, and a witch, tangled together in a tale of Snow White...

Desperate to save the last of her family from the murderous Faery Queen, Trina Mac Elvy weaves a spell of entrapment. But instead of a common soldier, the queen has released the Dark Huntsman, a full blooded fae with lethal powers.

Caged for treason, Logan Ni Brennan, is ready to do anything to win free of the manipulative queen, even if it includes running a last errand for her…murdering a witch. The sight of Trina, ready to fight despite the odds, gives him another option: use the witch as a chess piece, put the queen’s son on the throne, and bring down the queen forever.

As the queen slides into insanity and her closest advisor makes plans to succeed to the throne, Logan secrets Trina away in the enchanted forest and makes a decisive move in his dangerous game of manipulation. But the gaming tables of fate turn on him, and when Trina’s life is threatened he discovers he risks more than his freedom…he risks his heart.


Purchase it at Amazon
Add to Goodreads Shelf

Interview
Hi Jessica :) Glad to have you here.


Now, to start, what inspired you to start writing the "Tales of The Black Court"?
Thanks for having me on your blog, Aly. As for the Tales of the Black Court, originally I wasn’t sure what I wanted to write or how to even get started and I certainly didn’t know I’d be writing fantasy romance. There wasn’t much out there in the paranormal genre, and what was out there was vampires and werewolves. I’d written some contemporary romance as well as some suspense, but something was lacking. Then I got the paranormal bug. I grew up reading a mix of fantasy, sci-fi, and romance, so paranormal is right up my alley. I’ve always loved fairy tales, and elves, and magic, so I decided to twist fairy tales with those elements, and of course make romance the main event. At the time I started writing few people were twisting fairy tales. I chose Snow White for the first twist and The Dark Huntsman was born.

How would you describe the series to someone who hasn't read it yet?


While I use fairy tales as a framework, the series has its own world that is a mix of our modern world with traditional fantasy elements. The romance between enemies is the central story for this book. Each book in the series follows one of the MacElvy cousins and their collision with their family’s deepest enemy. The fae.

Describe Trina and Logan in 3 words each.


Tough question! So many fun scenes! I loved writing the interplay between Trina and Logan.
For most of Trina’s whole life she’s been on the run with her aunt and cousins, her interactions with a men have been few. And she’s never met a man like Logan. Magically and physically stronger, older, and raised in a dark, dangerous environment. But inside Trina is a fighter, so even though she’s not sure how to handle an alpha-male fae, she gives it her best shot.
Here’s an excerpt from chapter two, when they finally have a chance to stop and bargain for the terms of Trina’s cooperation:

What did you find most challenging in writing the book?
This book is what we authors call, the book under the bed. I started writing it long ago, I think it might have been 2007, when I thought writing a romance would be easy. Then I finished it, realized it wasn’t easy, and under the metaphorical bed it went. Occasionally, I would haul it out from its nest and re-write, applying all my new-found writerly knowledge. In fact, it’s been re-written over three times from start to finish. My challenges have run from simply finishing the story, to working on everything from dialogue to pacing, to then making marketing and publishing decisions. By the time this one was ready I’d already published three of my spicy new adult shifter fairy tales, so that might give you an idea of how long it took! Some authors never publish this type of manuscript, they leave it tucked safely under the proverbial bed, but I loved this story and wanted to share it, so here it is!


Who is your favorite character you have ever written?
I actually had a ton of fun with Red, from Little Red Riding Wolf. She’s spunky and adventurous, and since she’s a werewolf she’s a very strong heroine. Except when it comes to her pack and family—then she’s a marshmallow. Little Red Riding Wolf was started as a break from re-writing The Dark Huntsman over, and over, so I broke loose and had a blast. I wrote the first draft in two weeks…then of course had to edit the heck out of it. I hadn’t written spicy before and writing that book changed how I approached all my intimate scenes. Just a warning, that series of novellas is on the hot side and Red is definitely ready to break loose!

How do you deal with writer block?
Luckily I don’t have much trouble with writer’s block. For one thing, I now outline my books so I always have an idea of what scene I want to write next. For another, if a scene is giving me trouble I skip to another one. Unfortunately, that does mean that sometimes I think I have the book finished and then I go to edit the rough draft and find those troublesome scenes only have a few sentences. But at that point I have a much better feel for the book, and characters, and can usually sit down and hammer it out.
Writer’s Block is interesting because it’s giving in to the idea that if something isn’t working you need to sit there and work on it until it is. I don’t subscribe to that theory. My time is too valuable. Maybe it’s trying to do too much in my personal life, but I’ve learned that all my time needs to be busy and if I can’t write one thing, I can darn well work on another. If it gets very bad, I stop writing fiction and work instead on my blog. I love blogging and there is always something I can blather on about. Even if it’s writer’s block!

Do you listen to music while you write?
I don’t. I used to be a huge music listener, and I definitely get ideas for stories while listening to music. But, when my children were small, I found that the loud, pounding, rock music I loved, riled them up. So I turned off the music most of the day. Now I’m used to working in quiet, and I like it. I keep the music for house cleaning, dancing around the living room, and singing in the car.

Did you always want to be an author? Yes. I remember being very small, perhaps two or three years old and discovering that PEOPLE wrote books. That was a revelation. From that point on I wanted to be a mommy, an artist, and an author. Two out of three ain’t bad!

Does your family read your books? Now that’s a funny story. My husband only reads audio books. He works around sixty hours a week, and he drives a lot, so most of his time for reading is in the car. My books aren’t on audio…yet…so he has to find time to read them. Even though Little Red Riding Wolf is a little over 100 pages, it took him a whole month to read it. He’s in the middle of the sequel, Snow and the Seventh Wolf. I doubt he’ll ever get to The Dark Huntsman. My mom, however, reads everything I write. Thanks Mom!

Can you tell me some of your favorite authors? How about books?
I love reading paranormal authors. Karen Marie Moning, Melissa Mayhue, Thea Harrison, and Laurell K. Hamilton are some of my favs. You might notice that there is a huge variety in terms of heat level and stories, but I believe in reading across genres and not limiting myself. So I also read romantic suspense and contemporary romance authors. Outside of romance I read fantasy, mystery and occasionally dip my toe into sci-fi. Oh, and I am a big Jane Austin fan and re-read her books every few years. I have to watch Lizzie and Mr. Darcy every year. Go Colin Firth!


Currently I am working hard to get book two in the Tales of the Black Court, Prince by Blood and Bone, out to market. It’s done. At least the writing is done and we’re down to the last edits and wrestling with the cover. All those pesky finishing touches (and my perfectionism) are holding it back, but it will be out by the end of January! As long as my editor can get it back to me by then. Fingers crossed!

A few short answer questions:
Tea or coffee? both
Do you prefer the sea side or the mountains? both
Sweet or salty? Ah, sweet. J
Print or ebook? I think I’m moving into preferring the e-books, finally!
Movies or TV shows? Both. Can you tell I’m a Pisces? Two fish swimming in both directions. I’m horrible at choosing. Can’t I have it all?

Thanks again, Aly, to you and all your readers for letting me come on your blog and talk about my books and writing. And I would love to continue this conversation, so leave me a comment or come by my blog http://jessicaaspen.com and talk to me there. I love to chat!

Jessica Aspen has always wanted to be spirited away to a world inhabited by elves, were-wolves and sexy men who walk on the dark side of the knife. Luckily, she’s able to explore her fantasy side and delve into new worlds by writing paranormal romance. She loves indulging in dark chocolate, reading eclectic novels, and dreaming of ocean vacations, but instead spends most of her time, writing, walking the dog, and hiking in the Colorado Rockies.

Join the Jessica Aspen mailing list! Get the scoop on new releases, sales, plus the chance to win ARCs and participate in special giveaways.  http://eepurl.com/zs4Sj

Giveaway
e-copy of The Dark Huntsman
a Rafflecopter giveaway
at January 09, 2014