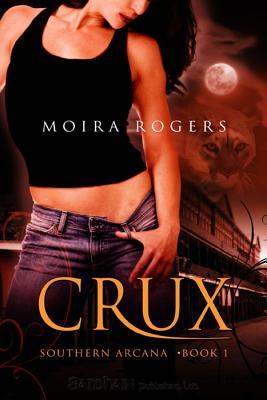 Jackson Holt makes a decent living as a private investigator in New Orleans, home of one of the largest underground supernatural populations in the United States. He and his partners have never met a case they couldn't crack...until a local bar owner asks him to do a little digging on her newest hire.

New Orleans is the fourth destination in as many months for Mackenzie Brooks, a woman on the run from a deranged stalker. After all, any man who shows up on her doorstep claiming to be her destined lover has more than a few screws loose. But crazy doesn't explain why he always finds her no matter how far she runs.

When her well-meaning boss puts a PI on her case, Mackenzie comes face to face with the incredible truth: magic is real, and whatever spell has kept her hidden and separate from the paranormal world is rapidly deteriorating.

With time running out, she has no choice but to trust Jackson as he struggles to uncover the truth of her past-and her destiny.

This book contains devious schemes, epic battles, forbidden love between a shapeshifter and a spellcaster, nosy secondary characters, furniture-endangering sex and a woman fighting to choose her own destiny.

Crux was a great start to a new series. We are introduced to this universe co-existing with our own through the eyes of the heroine, Mackenzie. She is running away from a stalker[Marcus] convinced he’s her destined mate, father of her magical babies… Unfortunately all isn’t what it seems.

On the run, Kenzie gets hired in a bar in the French Quarter, New Orleans. Nicole, Nick, her boss, has one of her friends fallow her to find up if she really is living ok or if she’s in trouble. When Jackson sees where she stays, he talks her into moving above the bar. The next morning… problems came knocking[there are guns and spells involved].

After all this Kenzie starts fearing her sanity even more: what sane person believes in magic and shifters? Not little is her astonishment to discover this alternate world right under her nose. All her new friends and allies are either spell casters or shifters and she herself is a cougar. She finds out more about her parents and her past and that what Marcus said is actually true[at least partially]. All these revelations and the initial plan concocted before she was born change her life forever.

Mackenzie is a 24 years woman who loves to dance and dreams to own her own school to teach others about her passion. She is uprooted from her life, but still finds it in her to trust, to laugh and, most importantly, to hope and try to make things better. She never lets her circumstances beat her down. Jackson is a charmer, a white knight who sees through the façade Kenzie has and, as Nick does, offers to help her out, with no strings attached.

I enjoyed seeing them with each other and their friends. I was at the edge of my seat when things started to happen[can’t say what, you really have to read and find out for yourselves] and when the book ended I definitely wanted to know more about everybody[how’s Nick’s crush developing/or not, Kat’s overbearing cousin, Alec, Nick’s sister, even Marcus] and some answers about who the hell broke into Kat’s apartment…

All in all I really enjoyed this book and the characters team Rogers wrote and their stories. All of them are so life-like, they have real concerns, family and difficult relationships, they have ups and downs, they are real. While reading the novel I rooted for them, cried at their sorrows and wanted to shout them encouragements :D I would only change the abrupt ending, it felt kind of rushed to me…The story is really engaging and it doesn’t feel like reading, more like watching a movie, the introduction to the world is smooth[though it has a small info-dump when they are trying to tell Mackenzie all about the paranormal world] and as I said before the characters feel like real people. I will definitely continue this series.