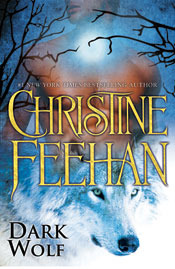 In Dark Lycan, Christine Feehan journeyed into the heart of the Carpathians, and into the souls of two lifemates stirred by the flush of passion and the threat of annihilation. In Dark Wolf, the breathtaking story continues as the bonds of family are imperiled, and the fate of two lovers lies hidden in the seductive shadows between life and death.

Skyler Daratrazanoff always recognized the miracle that was Dimitri Tirunul, a man beyond any dream that had ever engaged her nights. But she was human. Vulnerable. He was Carpathian. Nearly immortal. She was nineteen. He was an ancient. Yet she held half his soul, the light to his darkness. Without her, he would not survive. Caught between the two warring species, Dimitri has spent centuries hunting the undead to keep his people free, and humans safe. He had survived honorably when others had chosen to give up their souls. But now, marked for extermination by the Lycans, Dimitri found himself alone, and fearing for his life. But salvation was coming…

No Lycan would ever suspect someone like Skyler to dare mount a secret rescue operation. A teenage girl. A human of untested abilities. But she had something no one else had. She was predestined for Dimitri—as he was for her. And there was nothing stronger for Skyler than her desire to see her life-dream come true. Whatever the risk.

To start: I love it when author use my country in their books, seriously I do. When they fuck things up, not so much...
-Gustoff[I googled it and it's Swidish] or Petr[it has Czech origins if you ask me] aren't Romanian names, I am 100% sure that you won't find them here, especially on thugs; better luck with Andrei, Vasile, Ion or, I don't know, Radu or crap
-you don't find guns everywhere like in the USA; thugs with guns are verrrry rear, with knifes and bats and crap sure, guns no;
-missing letters from Romanian words drive me insane: Moarta de argint=female cadaver of silver; however if you want "death by silver" then you write this "moartea de argint"[that "e" saves lives]. I know it's not much but seeing it repeatedly just makes me bonkers
-another thing that I saw mentioned, and I know now I'm splitting hairs, but since I started...: there were trucks everywhere. We are more on the sedan car type rather then trucks, those are very rare.

Besides that I really liked the book, though I don't think this series will ever end... New characters are introduced in at least the last 5 books. I like the series, I do, and it will make me feel sad and bittersweet when it ends, but I get the feeling it will not happen :D Ms. Feehan has created a lovely world with a very complex culture, but how much can you still add and not make it feel stale?

Skyler and Dimitri have a wonderful relationship and the fans of the series have waited ages to get their story. They are amazing together and apart. Skyler is a woman who has a lot of power thanks to her lineage, she is also very young and a bit damaged. She's had a tough childhood, but even that didn't keep her down, she was brave and loving and had a bit of a temper[her small revenges were hilarious]. Dimitri is an ancient, but not one of those a-hole type that will undermine his life-mate just to keep her safe. He understands her need to protect him and to be his partner, so he does everything he can to treat her as his equal. He is possessive, intelligent and everything Skyler needs to feel safe and cherished, and in her way she's perfect for him.

In this installment we've caught up to some of the other couples and it was actually my favorite part! Seeing them thriving, evolving but still facing the threat to their species and the small day to day problems made the HEA believed for me.

All this being said it was one of the best installment from Ms Feehan. the only thing I would change altogether were the chanting songs. I understand it's part of the culture but IMO they should be in the appendix for the die-hard fans who want to read them, I am not one of them.

And some comic relief:
there's a pet wolf with the name "Moonglow", I unfortunately read  MoonMoon and that's why I laughed and laughed and laughed... Do you guys know MoonMoon? If the answer is now enter this link and die of laughter[I do every time I read it :D]: http://9gag.com/gag/awrg3wB