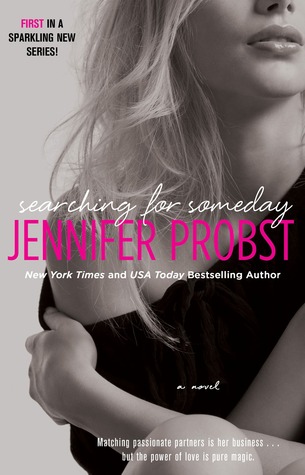 Kate has given up on love—at least for herself. She is both blessed and cursed with the ability to sense a romantic connection between two people—a gift that her family passed down for generations.


When Kate launches her own matchmaking company, Kinnection, with her two best friends in a cozy New York town, she has to put aside her own romantic disasters to make her business a success.


But when a furious man stalks into her office and accuses her business of being a scam, Kate is given the ultimate challenge to prove herself. Slade puts himself in her hands and asks Kate to find him love. Enraged at his arrogance but stubbornly eager to prove herself, Kate agrees, dedicating herself to the journey of finding him love…only to find herself falling for him along the way

This book had a very slow start for me, that translates in “I wanted to abandon it repeatedly”, but I’m happy that I persevered :D. I would characterize this story as a “sweet, romantic comedy”. Take a divorce lawyer and pair him with a matchmaker who has “the touch” and you get a few hours of relaxation.

Kate is an almost 30 matchmaker with her own business, friends, but unfortunately she can’t seem to find the one man to share it all. The book starts with her in a disastrous first date where she ends up pairing her date with the busboy. As you can imagine this is just the last in a long string of failed dates and she has had enough. Just after she decides to take a break from her love life(the inexistent one) an arrogant, irritating lawyer burst into her lobby and demands access to her records on his sister and accuses Kate and her business of being a fraud… He threatens a lawsuit and when that doesn’t have the desired effect he insists he wants to be a client. Yes, this charming guy is no other then our hero Slade… Long story short, Kate accepts the challenge and sparks begin to fly. Slade is a cynical dude that doesn’t believe in love, just chemistry and he’s convinced that Kate and her friends are just scamming his fragile sister for her money. But as he gets to know them he starts to see things in a different light. I love how he figures out that Jane(the sister) isn’t actually the same damaged woman from a few years back and he starts admiring Kate, her integrity, her belief in second chances and her desire to make people happy. What I enjoyed most though is how he fights his feelings for Kate, how he keeps screwing up and the sexual tension :D What I disliked was the “touch” thing that was thrown in… I don’t like my genres mixed and the magic and spell book were superfluous IMO. I wished there was more on her friend Genevieve, though I think the next book in  the series is about her, she  was a fascinating character.

To sum it up, the novel was fun, the characters were entertaining, the writing solid(some word choices pulled me out of the story, but it happened only 2 or 3 times), and the dog was a cutie :D

PS: I don't know why people shelved this as a NA since it's so not. First of all the characters are 33 and 30, 2nd there is no discovering yourself crap and angst...