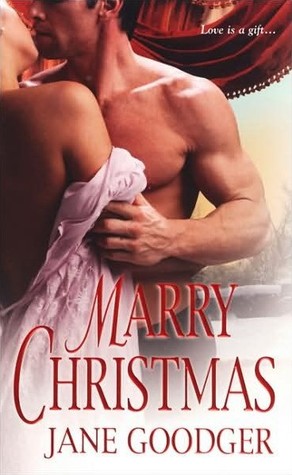 A Christmas wedding to the Duke of Bellingham. Any other socialite in Newport, Rhode Island, would be overjoyed at the prospect, but Elizabeth Cummings finds her mother's announcement as appealing as a prison sentence. Elizabeth has not the slightest desire to meet Randall Blackmore, let alone be bartered for an English title. Her heart belongs to another, and the duke's prestige, arrogance, and rugged charm will make no difference to her plans of elopement.

Against his expectations and desires, Randall Blackmore has inherited a dukedom and a vast estate that only marriage to an heiress can save. Selling his title to the highest bidder is a wretched obligation, but to Randall's surprise his intended bride is pretty, courageous, delightfully impertinent—and completely uninterested in becoming a Duchess. Yet suddenly, no other woman will do, and a marriage in name only will never be enough for a husband determined to win his wife in body, heart, and soul.

Lovely read for the holidays.

I had this in my TBR pile since last year when I first read a book by Ms. Goodger and I finally got to it thanks to the Ho Ho Ho read-a-thon.

At least ½ of the story takes place in Newport, USA where the heroine lives. We first meet Elizabeth who is 19 years old, very, very rich, in love with an a-hole… she also finds out that she has to marry an impoverished Englishman, who also happens to be a duke. As you can imagine she doesn’t take this well.

Our hero Randall Blackmore, the 8th Duke of Bellingham just inherited the title from his brother and finds out just how in debt the dukedom is. He is saved[or not, depends how you think of it] when a letter arrives from the USA with a proposal to marry a heiress. It doesn’t sit well with him, being bought and all, but he is just too in debt to have a choice. He decides to go meet and propose to this gauche American girl and make the best of it. Just imagine his surprise when he meets her and she’s not impressed by his title or his arrogance and, furthermore, doesn’t want to marry him!

I really had fun reading this though at times I was beyond exasperated. Elizabeth is very intelligent, a realist, but she is also a mule! I couldn’t get why she just had to keep on “being in love” with that idiot when it was obvious to everyone else that he only wanted her money[when she suggested they elope and move in another part of the country he turned every color in the rainbow and said he was sure her father would understand that they loved each other and give them her inheritance]. Randall was a sweetheart and put up with her cretinism till a point where he just got mad at being played… from there on Elizabeth had to fight to make him understand that she was actually in love with him. I loved the part where she groveled :D

The secondary characters were great, at least Margaret[Elizabeth’s friend] and Edward[Randall’s friend]. I loved seeing their interactions with each other and the h/H. Well, almost all characters were good, without Elizabeth’s mom. She was an ogre! She had Elizabeth under lock and key for most of the time, she didn’t let her speak up and manipulated her emotionally, I just wanted to strangle her! My feeling for Elizabeth's mom^[/caption]

Ms. Goodger writes beautifully, just the right blend of descriptions, narrative and dialogue. I actually forgot how much I loved reading her books.

All in all I totally recommend this read to anyone who wants a marriage of convenience themed book that takes place around Christmas.