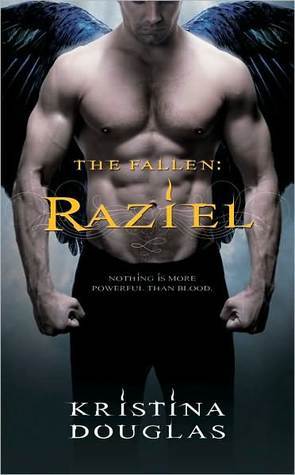 Kristina Douglas’s sexy new series introduces a realm of fallen angels and ruthless demons, where an eternal rebellion is brewing . . . and one unsuspecting woman can change the fate of the Fallen forever. She was just an ordinary mortal . . .

“You’re dead” is so not what Allie Watson wants to hear. Unfortunately, it explains a lot. Like the dark, angelically handsome man who ferried her to this strange, hidden land. The last thing she remembers is stepping off a curb in front of a crosstown bus. Now she’s surrounded by gorgeous fallen angels with an unsettling taste for blood—and they really don’t want her around. Not exactly how she pictured heaven.

. . . until death catapulted her into a seductive world she never imagined.

Raziel is unsure why he rescued Allie from hellfire against Uriel’s orders, but she stirs in him a longing he hasn't felt in centuries. Now the Fallen are bracing for the divine wrath brought by his disobedience, and they blame Allie for the ferocious Nephilim clawing at the kingdom’s shrouded gates. Facing impossible odds at every turn, the two must work together to survive. Raziel will do anything to defend his spirited lover against the forces of darkness—because Allie may be the Fallen’s only salvation.

Too many books, too little time, so I DNFed this one.

This story had so much potential: it has angels, fallen and not, demons, interesting settings... Unfortunately, I just couldn't make myself read more. I didn't like either character and the pace of the book is so damned slow!

I read so much monologue and inner thoughts to last me months! Who the hell cares of your comfort food and why do you have to talk a whole page about it?! And after that you go on describing other crap as well? Why?

Raziel is an a-hole, the bad kind... After he left her sleeping on the floor for over an hour and considered leaving her there till she woke up, well, imagine me throwing something out the window and deleting the thing from my laptop. That's not his only problem, but that stayed with me.

Allie isn't better. She's self centered and keeps talking about her problems with her mom, like we need a reminder in every chapter. Newsflash: we all have problems you crazy chick!

The characters felt flat and, to me, were uninteresting. The writing style was too introspective and the constant jumping between view points didn't entice me to read more. All in all I won't be picking this book up again, nor will I try the others in the series.