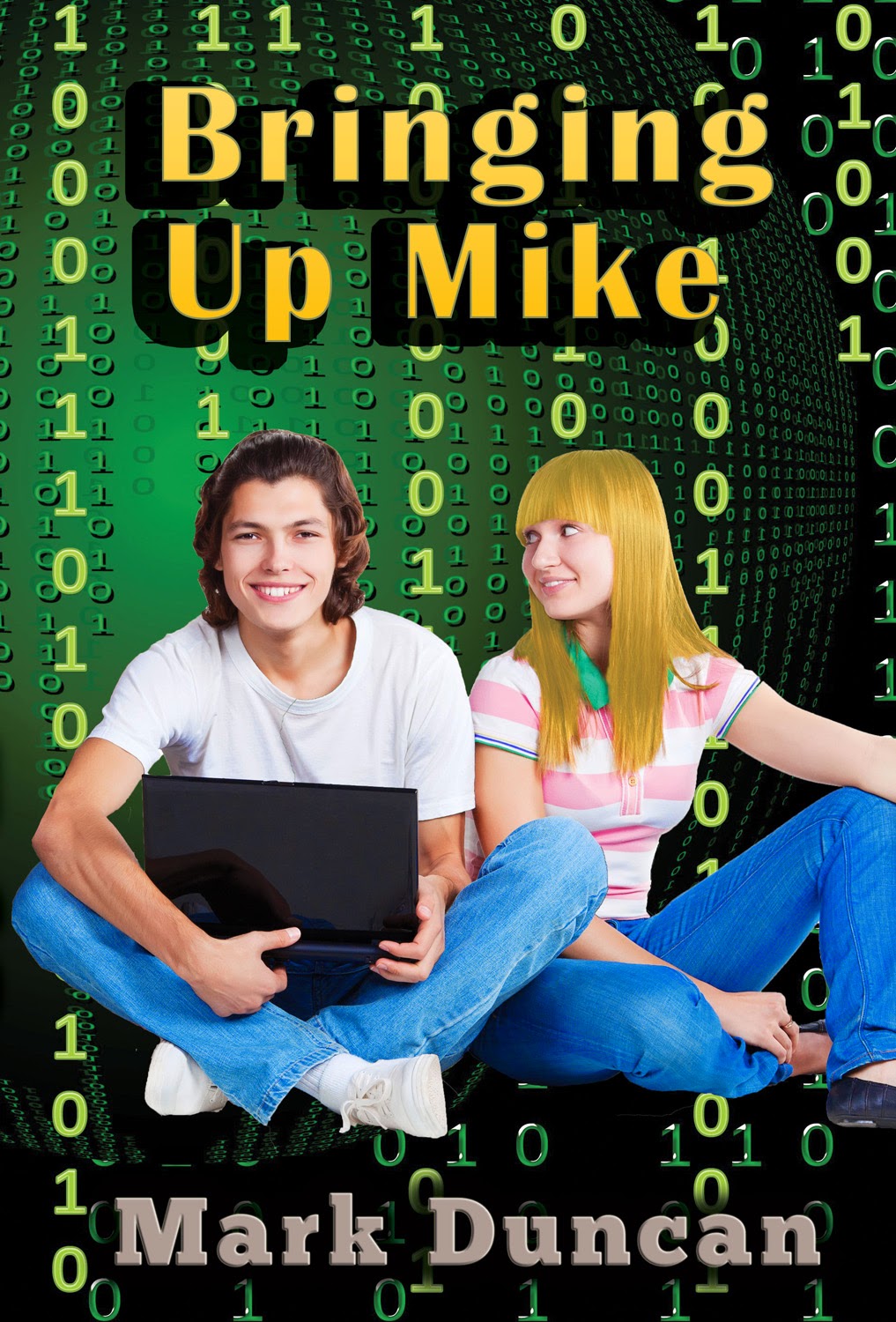 What happens when Joe, a teen prodigy makes drastic changes to his life and attends high school incognito with Mike, an artificial intelligence? His plans take an unexpected turn when he buys a neglected former racehorse.

Bringing Up Mike is a tapestry of intertwined stories over the course of a school year: A teen genius who has grown up too fast, a neglected former racehorse, a bereaved couple morning the death of their son, a girl struggling to attend college, and a former mobster determined to be top dog.

Bringing Up Mike is about people given a second chance at happiness and success and how they become better people and mature.

From Concept to Book—How Bringing Up Mike Was Created

The inspiration for Bringing Up Mike came from a July 2012 talk that Dan Kaufman, Director of the Information Innovation Office of DARPA, gave at the Computer History Museum. He observedthat a major problem with today’s artificial intelligence systems is that sooner or later they tell you something stupid. He suggested that one avenue of solving this would be to have a baby AI that grows up with you, with which you would have a two-way conversation, correcting and educating it over time.

I spent the next two months defining the characters and creating a rough timeline / outline of the conflicts and character arcs, following the advice given by William Knott in The Craft of Writing. During this time I decided that much of the novel would be set in a small, rural town to the south of Nashville, Tennessee. (You can see the timeline here: http://www.askmarpublishing.com/books/bringing_up_mike_files/2014-1-12%20Timeline.pdf)

At this point, I started to write the novel. Each chapter consists of eight to twelve sections with the point-of-view sometimes changing with a new section. I took this approach to show that how a character perceives themselves is often different from how others view them. Most sections required spot research to verify specific details.

In early May 2013, I finished the first five chapters. I asked several friends to read what I had written and asked for feedback. My friend Ingrid introduced me to her neighbor Joyce who is a retired editor. It turns out that she reads with a pencil in hand and automatically does line editing. Subsequently, as I wrote each chapter, I had her edit it before providing it to others for review.

In December, I finished the first draft. Joyce suggested that I find an editor that had worked on a lot of novels to take my draft to the next level. But where to find a suitable editor? I found that the Editorial Freelancers Association and the Independent Editors Group had lists of their members. I looked for editors that had edited many young adult novels that had positive recommendations. I selected Cindy Davis since she had both written a dozen novels and edited hundreds of books.

I paid Cindy to do a manuscript critique. She felt that I had too many points-of-view, that I needed to write sentences in active versus passive tense, it was overwritten, and that the novel was too long.

It took over a month to edit and rewrite the novel responding to Cindy’s critique. Fortunately she didn’t articulate any problems with the plot or characters.

Cindy then did a combination of developmental and line editing. She flagged portions of scenes that she thought were slow, boring, or TMI (too much information). At the same time, another friend volunteered to do line editing. The net result was a manuscript that was much improved over the second draft.

At this point, I made a mistake. I created an ARC (Advance Reader Copy) based on this manuscript. I naively thought that having three different editors, along with my own proofreading had resulted in a reasonably clean manuscript.

I did some book giveaways of the ARC on Goodreads and LibraryThing, and provided review copies via NetGalley to friends. The feedback I received revealed that the novel needed both proofreading and copyediting—there were numerous errors. I was very embarrassed.

I hired a copyeditor with forty years of experience at newspapers who went through and flagged countless errors, omissions, improper capitalization, et cetera.

As a publisher of many electronic books, I’ve created countless covers. But for Bringing Up Mike, I felt it needed a unique cover that gave you an idea of what the novel was about. I hired an illustrator to create the current cover. While several reviewers have said that the novel is much better than the cover, I’ve tried several other concepts and have yet to find another cover that everyone agrees is better.

As you can surmise, I learned a lot over the past two years, in particular, the function, value and importance of good editors!

“Tonight, ladies and gentlemen, I present to you…” said Mike in the voice of Josef Fischer in The Illusionist.

Sue looked at the first website. “That’s a bit gaudy. It looks like a coloring book. How about something with all the headings and text in black with white backgrounds?”

“That’s better. But I didn’t mean no color—rather, to reserve it for use in photos, graphics, maps, and clip art. Put one big visual at the top, and a small one elsewhere on the page. A feature story under the main headline, with room for two or three smaller stories to follow it. Some tabs for the various departments.”

“And behind door number three.”

“Yes, you got it.” Sue looked puzzled. “Mike, how can you possibly prototype a website so quickly?”

“My dear, a magician never reveals his secrets,” said Mike in the voice of Gypsy from A Bug’s Life.

“What are you, superhuman?”

“They’re just off-the-shelf WordPress templates. I selected a subset developed for online newspapers. You change the CSS and bibbity-bobbity-boo, presto-chang-o, a new website!” Now he used the voice of the fairy godmother from Cinderella. Mark Duncan grew up in Pasadena, not far from Caltech. In high school he spent Friday and Saturday nights at the Stanford Artificial Intelligence Lab (SAIL) and subsequently was a member of the Homebrew Computer Club. He received his BSEE from UC Berkeley. He has worked or consulted for numerous startups in Silicon Valley. He lives in Menlo Park, near Stanford and has written extensively on emerging technology topics. He enjoys photography, movies, theater, fine dining and has visited all 50 states and much of Europe. He is the author of Bringing Up Mike, www.askmarpublishing.com, mark@askmarpublishing.com

Mark will be awarding a $50 Amazon or B/N GC to a randomly drawn winner via rafflecopter during the tour.
a Rafflecopter giveaway