Review: Daughter of the Blood by Anne Bishop 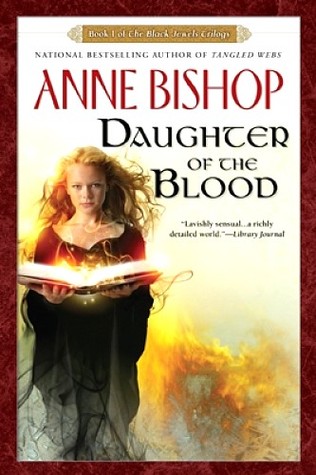 The Dark Kingdom is preparing itself for the fulfillment of an ancient prophecy--the arrival of a new Queen, a Witch who will wield more power than even the High Lord of Hell himself. But this new ruler is young, and very susceptible to influence and corruption; whoever controls her controls the Darkness. And now, three sworn enemies begin a ruthless game of politics and intrigue, magic and betrayal, and the destiny of an entire world is at stake.

This book… I don’t know what to say about it. The world Ms. Bishop has created is fascinating, but very brutal. I don’t understand it enough to explain it, though I promise I’ll try.

This universe is a medieval one based on feudal values. There are people who have no magic, laden, and people who have it, Blood. The strongest of the Blood are classified in casts depending on the Jewels they get in the Offering of the Darkness ceremony[from what I understood, the women lose their virginity in it and get their Jewel; the men, I have no idea]. The territories are ruled by Queens who, themselves are answering to the top Queen. I wrote Queen with a capital ‘Q’ because they are the strongest of the Blood. The men who have Jewels get the rank of Warlord and they serve the Queens.

What is important to understand is that this is a matriarchal society, that after a crippling war[started by a crazy chick who was power-hungry] started to pervert itself. Before the war, the queens were chosen based on power and strength not on family connections, now there aren’t any strong queens left… The Warlords also chose the queens they served, now many of them are enslaved and some of them are turned into pleasure slaves.

This world is very focused on sexuality... The strong men are transformed into slaves with cock rings[yes, you read it right] named “Rings of Obedience” that send pain to control them. The women can be prevented to reach their full potential by rape, this is the thing that enrages me! Why add this to the rules of the universe, why not make it different? The now-ruling Queen, Dorothea, is a crazy bitch that has girls raped and, to make matters even worse, she’s a perverse SOB that loves to torture people and isn’t averse to incest[strangely enough this wouldn’t make me so mad at her if it was consensual, but it’s not!]

Now enough about the world and the disgusting antagonist, let me tell you a bit about the protagonists. Jaenelle, the girl everything revolves around, never has a POV, we only see here to the eyes of the others. The story starts when she’s very young[7 or so] and continues till she’s almost 13. She is the powerfulest[I know it’s not a word, but it should be] of them all, she knows to teleport[kind of]between realms[I didn’t understand this but they sound a bit like earth(Terreille), purgatory(Kaeleer) and hell(Hell)], she is the best healer, she speaks the OLD language and a myriad of other things. She is a bit too good for my tastes, though Ms. Bishop tries to temper it by making her incapable of doing very basic magic[she does the very difficult stuff, as I said] and by giving her the crappiest family that ever existed[I could have lived without this one].

Jaenelle is tutored by Saetan and, later on befriends Daemon. Saetan is a crazily old dude that rules Hell, he’s also bored with life and closed off from everything till the arrival of the girls. He is like her foster father, he gives her lessons on magic and tries not to think of what would happen to her if she were corrupted… He’s a funny guy, generous and he’s trying not to despair every time he hears of one of her adventures or the manifestations of her power. Daemon on the other hand is a nice dude turned cynic after centuries of being bartered by the crazy Queen for his sexual prowess. He’s powerful and vicious with his enemies and treats the weak with kindness and helps them when they need it. I like him even when he displays his temper :D makes things more fun.

I said it before, but the level of violence in this world is appalling! Daemon has a half-brother, Lucivar, who was also marked as a slave, through all the book, every time we read his POVs he’s being tortured or sees tortured being done. The book starts with a prophecy, but after it we see a guy sentenced to a slow tortures death by being eaten by rats[the author describes how they eat his balls]… then we see poor Lucivar being given some crazy aphrodisiac and he’s raped. Then we read about young girls being raped, I still cringe every time I think about it. I can’t understand why the author felt the need to make and describe how brutal and depraved the world she created is.

Despite it all I couldn’t stop reading the book! I felt compelled to see if Daemon escapes his degrading circumstances, if Jaenelle masters her powers, if Saetan meets his children… The writing also kept me interested, it’s flowing and the descriptions are just enough to give you information but not to overwhelm.

In the con column, besides the cruelty of the world and the absent POV of Jaenelle I want to add the names. They are just plain bad, a character is named Surreal.

I don’t like how they sound and most are very hard to remember, I also kept frigging mixing them up.

All in all it’s an interesting universe, one that I just hate to keep reading into. I hope the next books are more… gentle.