Guest Post: Tammy Farrell[author of The Darkness of Light]

The Darkness of Light
The Dia Chronicles #1
Tammy Farrell 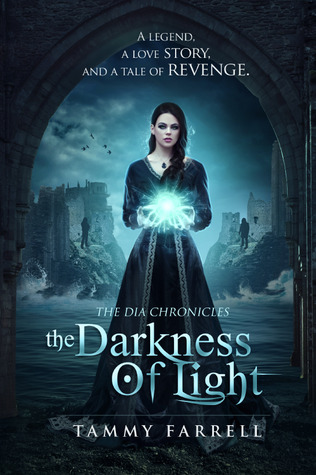 The world has long forgotten them, but their descendants live on, not wholly mortal or god, but something in between…

At the dawn of the sixth century, in the aftermath of her mother’s brutal execution, Mara Black is forced to flee the only life she has ever known.

Mara can tell she’s different, but isn't sure why. After she encounters two mysterious strangers, she discovers her secret is but a drop in an ocean of many. She is a Dia, a descendant of ancient gods, and her mother sacrificed herself to protect Mara from their past.

Summoned by an uncle she didn't know existed, Mara thinks she’s found the family she’s always wanted, and Corbin, a love she never thought possible. But not everything is as it seems. Her uncle has other motives for protecting her, and her mentor, Malcolm, becomes so jealous, he’ll do anything to get what he wants.

When tragedy strikes, and the true darkness among them comes to light, Mara discovers that sometimes love can give you everything, and obsession can take it all away. With her powers gone, and destiny calling, she has to look deep within to find the courage to save herself. Mara, along with Corbin and her newfound family, must fight to get back what was taken, or die trying.

Mara Black is a nineteen-year-old girl who’s led a very sheltered life within the walls of her village. When her mother is arrested, Mara has to draw on her own courage and strength to survive. Though she appears brave to others, nothing comes easy to her. She is constantly battling her fears and uncertainty, but she never takes the easy way out. She’s sometimes called stubborn, though that’s usually by someone who thinks she’s not as demure and submissive as medieval women should be.

Mara is a hard character for me to cast, but I think a dark haired Tamsin Egeton would be a great fit.

Corbin is the proverbial “hero” of The Darkness of Light, or at least, he tries to be. The merit of Corbin’s character is never in question. He is loyal, honorable and kind. But sometimes his convictions are so strong that a darker side of him comes to the surface. Corbin’s father was a Dia and his mother was mortal, but after Corbin’s mother’s death, Corbin’s father never told Corbin what he truly was. It wasn’t until his father’s death, fighting the invasions, that Corbin found out he was a Dia. While he’s loyal to his new family, he longs for the life he could have had. He often finds himself wishing he could fight like his father, instead of hiding in the shadows with the other Dia. But when Mara comes, all of that changes for Corbin. He seems to come alive and find new purpose in his life. He’ll become a warrior like he always dreamed, but the stakes will be much higher than he ever could have anticipated.

For Corbin, I always imagine a shaved headed Henry Cavill.

Malcolm is the wild-card of the three main characters, who eventually becomes the antagonist. When first introduced to him, readers see Malcolm as a misunderstood lost soul, and he is. But his choices often make him the villain. While he tries hard to do the right thing, there is a mean streak in him and an inner voice that he often gives into. Malcolm was orphaned as an infant and raised by Mara’s uncle. Malcolm is an exceptionally powerful Dia, being that his father was a Cian (a type of ruler among Dia), and he spends most of his time coveting the control that he thinks is owed to him. It seems that he might have some redeeming qualities, but when things take a dark turn in Malcolm’s life, he’ll make choices that can never be undone.

Malcolm has a very supernatural look. He has white-blond hair and very light gray eyes. I could see Welsh actor, Aneurin Barnard as Malcolm.

Now, while we’re doing dream casting, I’d also like to add some dream production suggestions. If I could have ANY script writer for The Darkness of Light, I would choose Emma Frost. She was the head writer for the adaptation of The White Queen and I’ve never loved an adaptation more than that one. I feel like she not only captured the novels perfectly, but there were added nuances that made the miniseries irresistible. In my eyes, she can do no wrong.

I also have a dream director, and another possible script writer. I LOVE the Irish writer/director, Neil Jordan. He directed Interview with the Vampire, Byzantium, and directed and wrote for the series, The Borgias.

Mr. Jordan has a gift for bringing dark stories to life with such poignant beauty and charm. I would love to see what he’d do to bring Valenia and all its dark corners to life.

Tammy Farrell grew up in Orangeville, Ontario Canada where she discovered her love of writing, and all things related to Edgar Allan Poe. She now lives with her husband and four fur babies in Greenville, South Carolina, where she teaches pre-GED English and attempts to learn French when she isn’t busy writing.