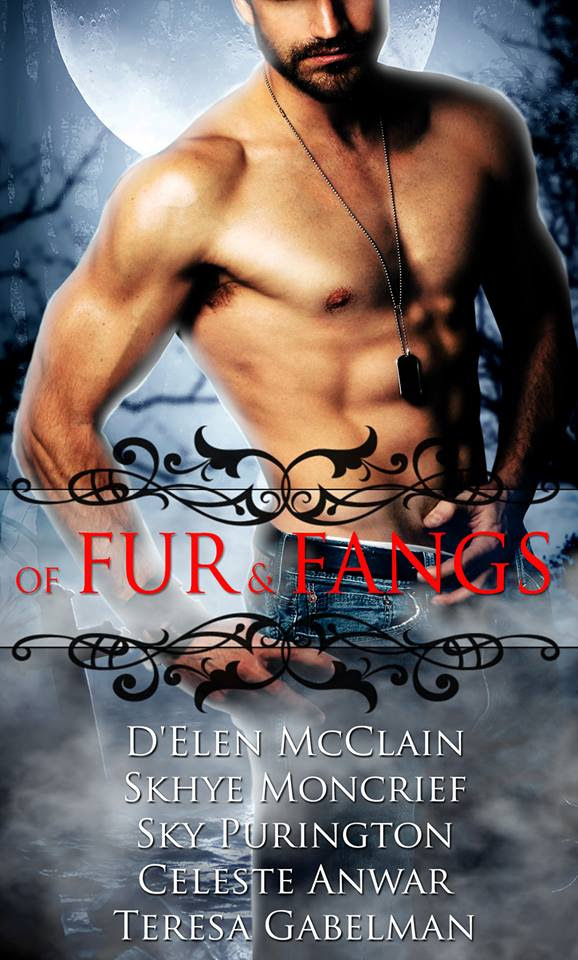 Things don’t shift any better than this. One cutting edge read after another, of Fur & Fangs brings you six steamy paranormal reads from five best-selling authors.

Every beastkind knows you don’t mess with a Kodiak bear—everyone that is except Mandy, the wolf-pack Alpha’s sister. When Mandy hears whispers that the bad attitude bear, Honey, has chosen a mate, she takes matters into her own hands because her wolf decided months before that Honey was hers.

Each wants the other, but neither can stand to be in the same room together…And each has secretly lusted for the other like a dark explosive sin. Stand back and watch the fireworks light up the Minnesota Territory’s post-apocalyptic sky because the BIG BAD BEAST can’t help but to huff and to puff and to blow Josie’s house in…

Their blood lust flares hotter than a solar storm…She seduced an earthling to create their were-assassin blood bond. Shanghaied to fight a war between vampires and werewolves, his gut shouts escape. But humanity needs a hero. Colliding in a universe of psychic mind-reading games, each realizes trusting the other is as dangerous as buying into their FERAL FASCINATIONS.

THE GEORGIAN EMBRACE
By Sky Purington

When Devin, a mysterious stranger claiming to be from the future, appears on her Georgian's worksite everything changes for eighteenth century Isabel. Even as smoldering, unavoidable desire ignites between them they must struggle to stay one step ahead of the time-warping house caught in Calum's Curse. Better yet, the rival werewolf determined to finish the legacy it began.

When Danior found the woman being drained of life by one of his clan, for some unfathomable reason, he knew he could not allow her to die. Against the ruling of the council, Danior secrets her away, taking her through the change from human into vampire and forever changing life as she knows it. But the move ensures they will be outcasts--hunted to the death by his people.

THE PROTECTORS DAMON
By Teresa Gabelman

The Vampire Council Warriors have been ordered to train social workers how to protect themselves against vampire attacks. VC Warrior Damon DeMaster’s and social worker Nicole Callahan clash at their first meeting. Even as sparks fly and tensions mount, Nicole and Damon depend on each other to protect the children of both races against the new drug hitting the streets, Crimson Rush.

“I’m giving you to the count of three before I shift and tear this cage apart.”
Mandy’s green eyes flashed. She checked out the bars and then gazed back at him. “Hmm. It might hurt, but go ahead and give it a try.” She flipped her long brown hair over her shoulder.
His low growl swelled as it traveled up from his chest. “One…”
Her pouty lips curved slightly. “I’m not a child, and the number counting thing is ridiculous.” Eyelashes swept down over her green eyes and then went back up almost in a practiced move.
Nine hundred pounds of Kodiak bear exploded within the steel bars. Large tuffs of brown fur stuck out between the solid three-inch slats of metal, leaving no room for movement. He pushed his weight against the steel, and when nothing gave so much as an inch, he went completely wild, which did exactly... nothing.
She gave him her bored look again. “Are you finished throwing your temper tantrum?”

Interesting way to see if I feared nightfall and being preyed upon by alien monsters. "I thought I'd ask for sanctuary." I shot him a firm glance, challenging him to think otherwise. "Avoid Bounders one night." Why not? The alien creatures could dine upon my carcass tomorrow night. This game of cat and mouse with this young Shifter could be pretty entertaining. I'd just play along to see how long it took for us to get around to introductions. Then the fireworks start.
"Then?" he asked.
The door creaked.
Jaguar spun to the doorway.
One filling with an extremely large form.Shadows draping his features. Shifter though. Too big for a Normal. Apparently, Augustus had enough sense to keep an adult around to keep the hormonal antics to a minimum here.
"Shouldn't you be guarding the gate?" a familiar unsettling voice asked.
My whole being shuddered and quaked.
In fear. I think. Hostillian.
My gut actually had the audacity to do somersaults.

My mouth watered where I sat across the table from the bloodied mixture. The succulent smell of blood isn't what I remembered from a lifetime of fistfights and accidents back on Earth. No. I could have done without the blood smell then. Now, the metallic tang rooted in my nostrils with a sweetness that begged for a chug-a-lug.
My mouth watered again.
Drink it and I cave. To give in means I relinquish the last vestige of choice I have. But the scent calls to me.
Nausea roiled in my gut.
Was that an intuitive sign to abstain? You stupid gut that only makes sense on Earth.
She settled into the bed, shoving the blade back in its boot.
Funny thing about the glass's contents. It had some kind of magical power because my captor blurred into the background behind the shimmery blueness of the liquid. Faded into a smear. And my woody didn't pitch a fit.

Devin gently seized her wandering, worried hand and shook his head, voice strained. “I’m fine, lass. Please sit.”
“No. You’re not.” She frowned. “What is it?”
After pouring three glasses of wine, Calum sat behind his desk. “Do as he asks, Isabel.”
She glanced between the two. Both were clearly troubled. Though reluctant, she slowly sat. “What’s happened?”
Calum looked to Devin. When Devin shook his head, he continued. “There have been some unfortunate changes.”
A chill raced up her spine. “Tell me.”
“The wolf…” Calum cleared his throat then said, “Has left its mark.”
Fists clenched, her heart skidded to a stop. Devin. Frightened, she looked his way. His smoky green eyes were unusually pale. Sensuous lips were cut into a thin, grim line and the skin around his eyes drawn. “What does he mean?”
“Did Lucas never tell you how he became the beast he is?” Devin drained his wine, eyes locked with hers. “Did he never mention the bite of the werewolf?”

CARNAL THIRST-
Maggie gritted her teeth and jerked the poker out of the wall.  “Look, I don’t know who you are, and I don’t know what you had in mind when you brought me here, but I’d like to leave now.”
He shrugged.  “Unfortunately, I can’t allow that.  You’ve been bitten.”
Her eyes widened.  “You son of a bitch!  You’re the one that attacked me, aren’t you?”
He smiled faintly.  “Not I.”
She wanted to wipe that smug look off his face with the poker, but she didn’t want to get that close to him.  If he was the one who had attacked her, he had thrown her around as if she was some shrimpy ninety pound weakling.  “Why is it that I don’t believe you?”
Again, he shrugged, as if it was a matter of indifference to him one way or the other.
She studied him for several moments when he didn’t respond.  “You can’t keep me a prisoner here.”
He looked at her with interest.  “Why not?”

“I still think you are taking grave risks that you are ill equipped to take, human,” Damon scowled, his voice a low deep rumble of authority.
“Yeah, well, it wasn’t you who put that child in the hands of a monster, vamp,” Nicole shot back. If he thought to scare her with the big bad vampire warrior thing he had going on, he was sadly mistaken. Backing down wasn't an option when it came to her job.
“Ah....okay,” Duncan stepped in not liking where this was heading. “Everybody partner up.”
Mitch glared a warning at Nicole, who just shrugged and mouthed, “He started it.” Taking a quick peek at the warrior, she noticed his smug grin. Oh yeah, this was going to be a problem.