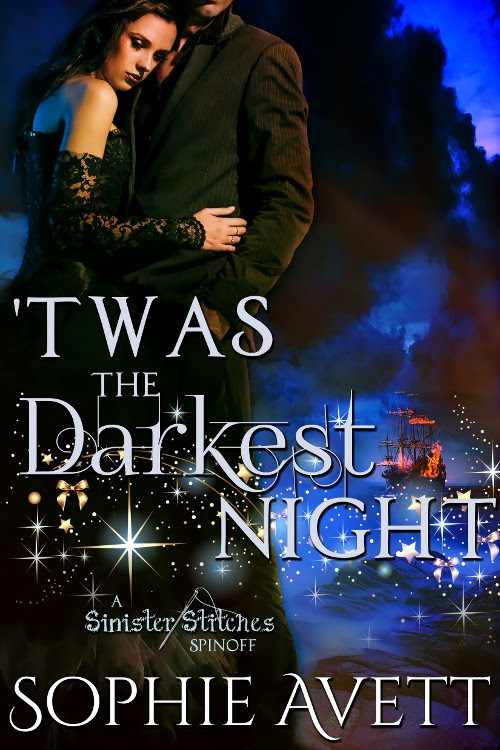 Remember the story about the troll who lived under the bridge—yes, well, that twit didn't have to pay rent.

Owner and operator of Bits and Pieces, and resident expert on charms and glamours, Elsa Karr is a witch with a sour frown and a list of things to do as long as Thor’s hammer. Top of the list is saving her father's shop from ruin. If she isn't trying to claw her way out of debt, she's arguing with her cat, Fenris, or shoveling carts of cake into her gob. She's not interested in romance or the vampire who rents the flat above her shop. All she wants is a little peace and chocolate--fine, all right! All right! The vampire is kind of screw all cute. (Curse him.)

The disgraced son and heir of the Wingates House vampire clan and a mad-man to boot, Marshall Ansley spends most of his time working and dodging his mother's phone calls. Marshall is beyond family. He's beyond everyone, actually. Don’t be daft, he especially doesn't do…Christmas. But behold, the plague brings an original flavor of annoyance this year when his boss tasks him with acquiring the account of a recluse fey and her upcoming Gothic clothing boutique, Sinister Stitches. That is the ONLY reason he's bothering with his shrewish landlord. No, that's it. No…really. Fine, if you insist, the witch might be a tad bit...all right, she's adorable. (Damn her.)

Scrooge meets Scrooge. Dominant meets Dominant. Tempers…spark. In each other, they may have unfold a tale that only comes to pass on the darkest of nights. 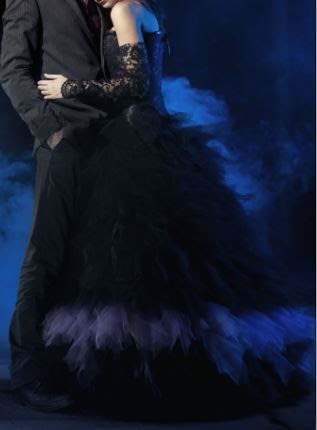 Pants are the enemy. No, really. If ever there was an enemy it was pants. Yep. Why? Because we are born pantless and we should go out that way. Who’s with me?! No one. Sigh. ( Do you know what this shows? That I have no idea how to start blog posts…or interact with other alien life-forms. Just go with it and have pity on the lass in the straight-jacket.)

As you have no doubt guessed, I won’t put on pants for anything less than a 7. (There are those among us that will get that obscure reference…) My characters are either naked or dressed to kill. Given they’re all monsters stalking New Gotham’s twisted, cracked, and cobbled streets, a criminal wardrobe is part of the job description.

“…apparel for a wicked fairy tale.”

Run by a spicy trinity of black magic sisters, they breathe star-dusted dreams to life with their gothic apparel boutique. They are schooled in the old ways of “fabric-bending” by the Needlewitches of old. With this knowledge, they’ve created an entire line of clothing that all share the same basic design element: one size fits all.

One size fits all.

Each garment will magically tailor itself to its wearer once worn. There may might be some “twirling” required, but a vampire’s steady hand should turn every wardrobe change into a stolen moment.

Take a peek at what the Sinister Stitches has to offer:

“Pardon the interruption, Ms. Karr, but are you ready for dinner?”

She forced her hand to her side and tossed a flat frown over her shoulder. “Indeed, vampire.”

Leaning against the door frame, Marshall was the picture of bloody elegance. Black slacks with a matching vest. A deep wine shirt. He’d left the top buttons undone. It was rich simplicity, and he wore it sickeningly well. Damp, disheveled locks drifted over his eyes as he peered at the blue marble on the coffee table with interest. She breathed in deeply, thoroughly appreciating the combination of his sandalwood body wash and amber cologne. His mouth quirked and she swallowed twice before she could speak. “Huldra, I—”

“And then be done with it, Elsa,” Ingrid reminded her firmly, but added in her signature sultry burst of frost, “Otherwise, enjoy. For both of us.”

Marshall lifted his eyebrows slightly and Elsa flushed and snatched up the speaker. “Ignore her.” She tapped the orb and it died into a mundane glass marble. “I’m ready.” She levered herself out of the chair and tossed the ball back in her bag. It clanked and rattled, circling until it dropped deep into the depths of the magical pocket.

He reached out for her hand. “Come here.”

She draped a black fur stole over her forearm and eyed his palm with suspicion. “Why?”

“I mean you no harm,” he promised.

Their gazes locked, time stilling between the two of them. She searched his expression and found nothing but the steely shrewd regard of a predator. Her feet felt heavy, leavened. She did not come to any man’s beck and call. Never. Never again. She offered her hand, but did not budge an inch. If he wanted her cooperation, he would appeal to her on her terms.

Marshall did not hesitate to take the distance between them, coming to stand so close, so quickly, she back-stepped, the back of her shins bumping against the chair. Snowy blue eyes were almost black in the shadows. His cool, slender fingers closed around her wrist and he hauled her against the solid wall of his chest, his embrace sealing around her like a coffin.

He yanked and something popped free from her dress. She hardly noticed. She was gone. Yearning for the individual folds of the thin skin stretched across his bottom lip, wondering whether each individual wrinkle was a crevice of flavor. What would he taste like? Her tongue snaked out to tease the line of her mouth and she found it a poor substitute for his.

Marshall showed her the writing on the small tag he’d apparently pulled from her dress. “Twirl to activate skirt.” His voice rolled over the words in a deep murmur. It vibrated in his chest and her naked shoulders tensed as she stifled a shudder. He took a step back and guided her around. He studied her from hooded eyes. Slowly. So very slowly. He savored. Without reserve or shame.

One time around. Then two. Then a third. Every time their eyes would meet, her skin grew warmer as desire deepened the snowy depths into a profound sapphire blue. Her knees were weak, but as he drew her around faster and faster it didn’t seem to matter. Nothing seemed to matter. He became her only point of focus in a world quickly blurring beyond what she knew. Beyond what she could readily understand.

Magic. It crackled to life, sparking across the textile and thread. Energy tickled her naked thighs and the limp silky material puffed and inflated into a billowing bell of smoky black tulle. “What…” Unfamiliar excitement danced in Elsa’s veins and she reveled in the fabric twirling about her. Wispy and light. Akin to smoke and shadows, the bottom hemmed by a ring of gray fog.

Marshall finally drew her to a stop and she mopped her hair back out of her face, breathless. He didn’t immediately close the distance between them again, and Elsa couldn’t control her legs as they carried her across the floor until the hem of her large skirt covered his slick black dress shoes. Their gazes held. They stood enthralled in the moonlight. Pale light beaming down on them like a blessing.

“Beautiful,” he whispered and backed away toward the door, drawing her along with him.

Tethered to him by their entwined fingers, Elsa allowed her feet to carry her across the oak, and she couldn’t help but feel like somehow, someway, Marshall had finally caught her.

Sophie Avett is kind of a nerd. Like not even one of the cute, hip ones everyone brags about nowadays. More like the socially awkward hippie who eats way too much bread and dreams about being a dragon from behind towers of mythology books. Um...yeah. Picture old, tattered paperbacks and comic books--mostly Batman and Wonder Woman--dwarfing a tiny desk, with just barely enough room for the troll who writes there and the 70 pound hell-hound that insists of laying it's wet nose on top of her bare foot.

Granted not the most exciting existence, but she tries to make up for it by writing romances populated with her own peculiar ilk of paranormal beasties.  Trolls, wyverns, the obscure Nordic brownie--she likes to keep things interesting. And bloody. (And mostly naked--but, we'll keep that bit between us.)

Sophie Avett loves to hear from her readers. (Hi, mom.) So if there's something on your mind, feel free to leave a message after the scream.

(Mom, seriously…you can just call me.) 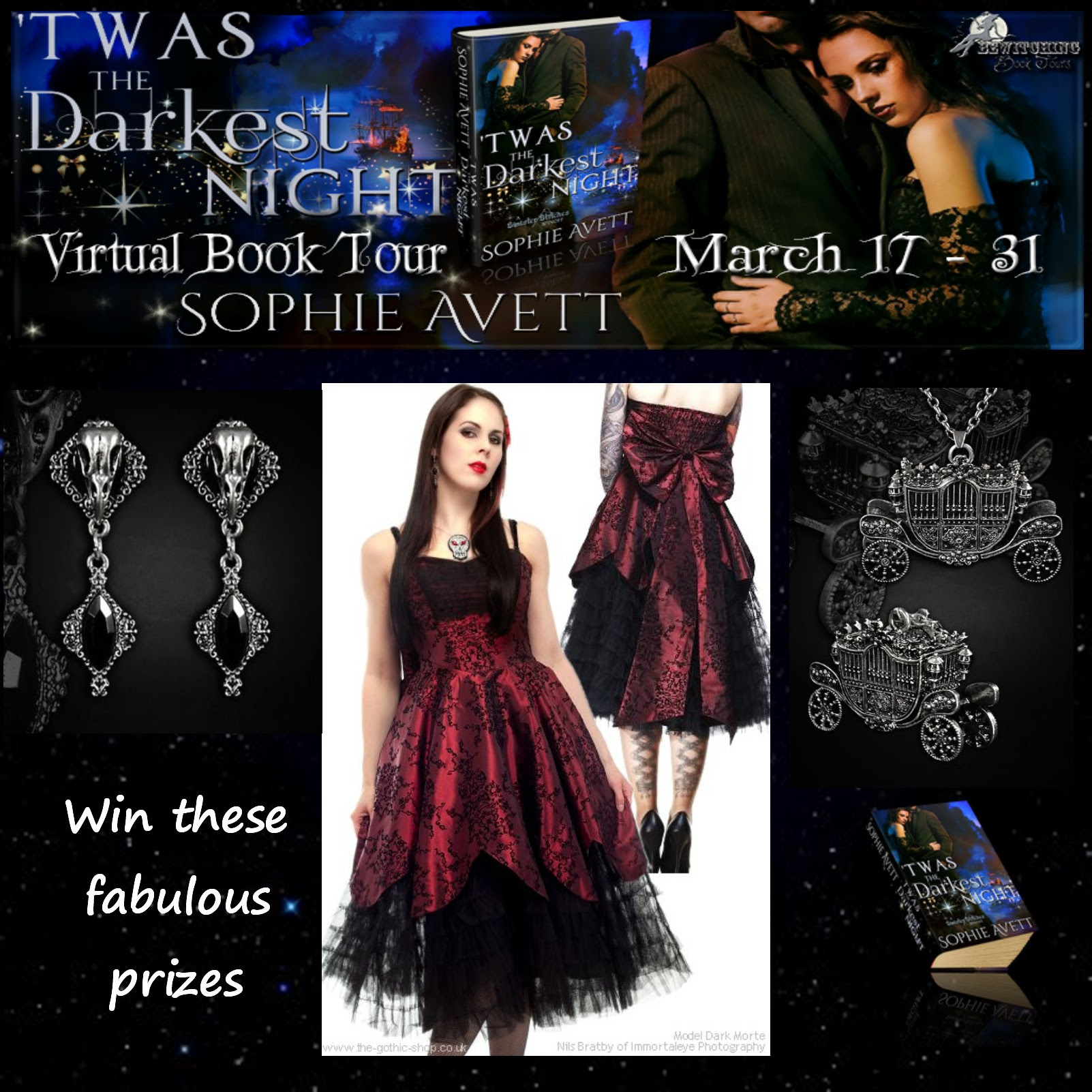 The first five people to comment on one of Sophie Avett’s Bewitching Book Tour Stops will automatically win a free e-book copy of ‘Twas the Darkest Night. Available formats include: mobi, pdf, epub, and prc.

Interested parties should leave their email address and which format they would prefer at the end of their comment. The ravens will keep tally and submit prizes! (If your e-reader format is not listed, contact the ravens directly via the contact form and the ravens will fashion a book especially for you!) Likewise, any winner of Sophie Avett’s contests will also receive a free e-book copy of ‘Twas the Darkest Night.


Take a trip to New Gotham!

A paid vacation to New Gotham is an expensive affair. So, the ravens have decided to cover the cost of travel and fashion this delightful "Carriage Charm."

"Naked wizards and scheming vampires? Where do I sign?!" all the witches scream and random sparks of black magic crackle across the ceiling.

We're getting to that, dearies...

An Appointment for Tea with Mrs. Potts the Storymaven (aka Fairy Godmother) will require the use of the earrings the pixies have fashioned out of raven skulls, AKA, "Raven Ear-wings."

The baubles should land the winners in New Gotham's clock-tower square. It could be that they do nothing at all. Or you might end up in oblivion. Good luck with that. The crickets will read about it in the papers, no doubt.

“What do I have to do?” everyone screams and waves their good silver stakes in the air. (Good girls.)

How to Win the Vacation of a Lifetime...


Win a Dress from Sinister Stitches!

Sophie Avett's ravens have partnered with the Witches-Who-Stitch to offer a special prize. It’s a dress featured in Sophie’s upcoming release, ‘Twas the Darkest Night. The sinister witches made it special for Elsa but after many carts of cake offered to the trinity in sacrifice, they have agreed to stitch an exact replica for one lucky witch.

“What do I have to do?!” everyone screams and fails theirs arms like deranged daisies. (Just go with it.)

At the end of Sophie Avett’s Bewitching Book Tours campaign (March 17 to March 31 2014) the ravens will announce a winner and gather that witch's measurements via email.

What are you waiting for?

Every girl needs a dress for a wicked fairy tale.