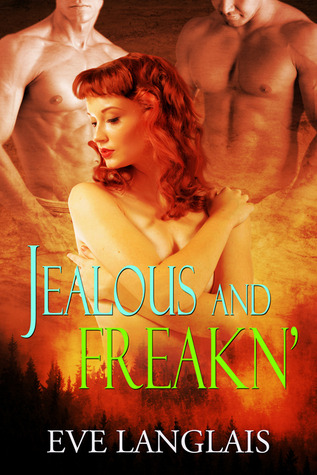 Francine’s loved Mitchell, a wolf like herself, since she first set eyes on him back when they were just kids. However, Mitchell’s never seen her as more than another annoying sister. Determined to make him realize she’s all grown up, she enlists the aide of Alejandro, a gorgeous cat shifter. She never counted on wanting them both.

Alejandro knows Francine is special from the first moment he meets the fiery plump wolf, which is why he suggests she use him to make Mitchell jealous. A great plan, especially if it means getting to kiss those luscious lips. One taste though, and he’s addicted, but how does he make her see past the man she loves to realize she’s also meant to be his mate.

For a long time now Mitchell’s been running from Francine, certain she’s mistaken that their destiny’s lie together. However, the little girl he remembers is all grown up, and when he sees her in the arms of another, a need to claim her overrides all his common sense. But, he’s waited too long and fate has decided that he’s going to have to share. Can he bend enough to accept Francine and another man, or will his jealousy keep him freakn’?


The 2nd book in the very funny "Freakn' Shifters" series has Naomi's BFF as a main character, Francine. Her partners are Naomi's brother who's a bit of a prude and set in his ways wolf shifter Mitchel and Janvier's(one of Naomi's mates) brother Alejandro(jaguar *swoon*).

It's funny to see how Mitchel finally realizes that he actually wants Francine and he really doesn't consider her another sister. Meanwhile, Francine almost gives up on him, but as a last ditch resort, she decides to make him jealous with Alejandro. I couldn't stop laughing the whole book. Francine and Alejandro are dirty talkers and have a great sense of humor. Seeing them bantering cracked me up repeatedly.

Mitchel wasn't happy at all with Francine's decision of dating Alejandro so, again, hilarity ensured. We see him kind of stalking them and then we see Francine crashing his fuck date with a crazy shifter. In the end he sees the light and we have the lovely HEA with the polyamorous twist :)
at March 29, 2014