Promo: Lost in a Royal Kiss by Vanessa Kelly 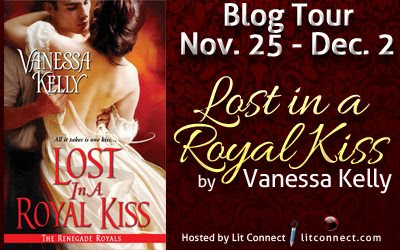 Lost in a Royal Kiss 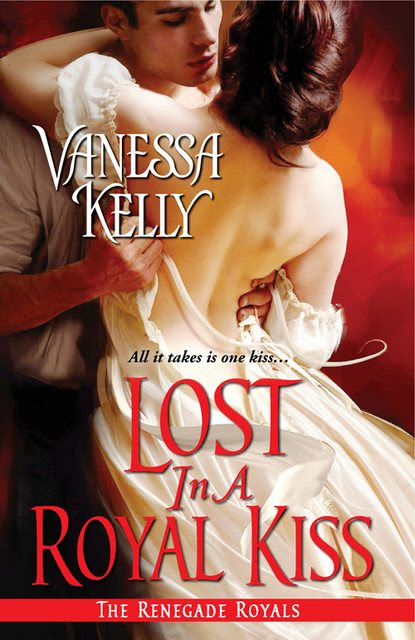 ALL IT TAKES IS ONE KISS…


In this thrilling introduction to her Renegade Royals series, Vanessa Kelly transports readers to the court of King George III—where a London street urchin unwittingly plays Cupid, ushering in a new era—and ultimately a new kind of royal…


With her widowed mother working long hours as governess to the royal children, Linnet St. Clare must look after her sibl ings and run the household. Now she must add to her worries the fate of Dominic, a poor orphan who has inspired the wrath of the king himself. Clearly Linnet has no time to consider her own desires—much less notice the attentions of a certain handsome, powerful magistrate…


Sir Anthony Tait is at a loss for how to capture Linnet’s interest. If only she would be still long enough for courting. Outright seduction seems the only answer. But will his kisses be enough to persuade her—or might Anthony have something to learn from young Dominic about matters of the heart? And in saving the boy’s future, might Anthony and Linnet at last create their own?…

The pulse at the base of her throat practically leapt through her translucent skin. “I . . . I think I’ll return to the house, Sir Anthony. It’s much too hot out here.”


But she made no move to rise, simply staring at him with parted lips and softly panting breath. Slowly, as if approaching a skittish foal, he lowered his head. Just before their lips touched, her eyes fluttered shut and triumph surged through his veins. Still, he kept a tight leash on his need. One false move and Linnet would flee.


And then his mouth was on hers, and something inside him unraveled. Her lips were lush and soft, tasting of honey and lemon and a sweet hesitancy that was all her.


Carefully, Anthony placed a hand on her shoulder, his fingers playing with the little puff at the top of her sleeve. Without stopping his exploration of her lips, he eased her body—still stiff and uncertain—into the support of his other arm along the back of the bench.


And, miracle of miracles, she sighed softly into his mouth as she relaxed against him. For long moments their mouths played, without hurry, his tongue tracing the seam of her lips while he waited for permission to enter. When she parted to let him in, his heart pounded and he surged into her with a groan.


He wanted to devour her, strip off her clothing, and lay her out on the bench, every inch of her open to his exploration. His hands shook with the force of his need and the effort it required to hold back.


With a sound between a whimper and a sigh, Linnet surrendered to him. She placed her small hands on his shoulders and stretched up, searching for a deeper taste with an innocent eagerness that struck him like a blow. Her kiss seared him, promising an endless bounty of delight. He gave silent thanks for the fact that Linnet was no shy maiden, nor a simpering miss who played foolish, teasing games. If she meant to have him—and it seemed she did—she would meet him head-on.


But when she sucked his tongue into her mouth, Anthony froze, stunned by her untutored passion. She stilled against him, mouth to mouth, chest to chest, and he could feel the wild beat of her heart. A moment later, lust surged through his veins and he yanked her even deeper into his embrace. But it was too late. Linnet began thrashing in his arms, suddenly desperate to escape. She dodged his mouth and clamped her hands against his shoulders, trying to force him back.


“Please, stop,” she exclaimed in a breathless, trembling voice. “Let me go.”


Anthony had to bite back a snarl as he locked down his frustration. Slowly, he opened his hands, practically having to pry his fingers from where they had dug into her shoulder blades. When he started to ease her away, she pushed and staggered to her feet.


“Oh, God,” she gasped as she regained her balance. “What am I doing?”


He reached for her, but she scrambled back, somehow managing to look wild-eyed and adorable all at once. 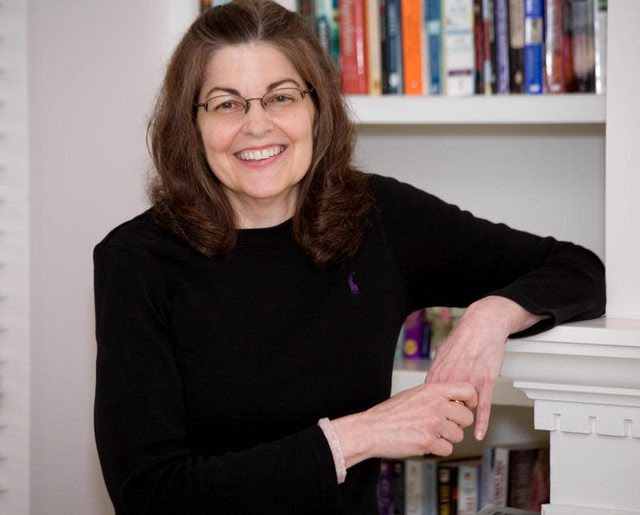 Vanessa Kelly is an award-winning author who was named by Booklist, the review journal of the American Library Association, as one of the "New Stars of Historical Romance." Her sensual, Regency-set historical romances have been nominated for awards in a number of contests, and her second book, Sex and The Single Earl, won the prestigious Maggie Medallion for Best Historical Romance. Vanessa's next series, The Renegade Royals, is due to hit the shelves in November with an introductory novella, Lost in a Royal Kiss. Book One in the series, Secrets For Seducing a Royal Bodyguard, will release in January, 2014, and Confessions of a Royal Bridegroom will be out in April, 2014.


When not dreaming of plots for her next Regency historical novel, Vanessa also writes USA Today Bestselling contemporary romance with her husband under the pen name of V.K. Sykes.  She's also a member of Rock*It Reads, a group of bestselling traditional authors who are self-publishing, and of The Jaunty Quills.


One ARC of SECRETS FOR SEDUCING A ROYAL BODYGUARD, Book one of The Renegade Royals series, per the total number of stops. (US/Ca only)