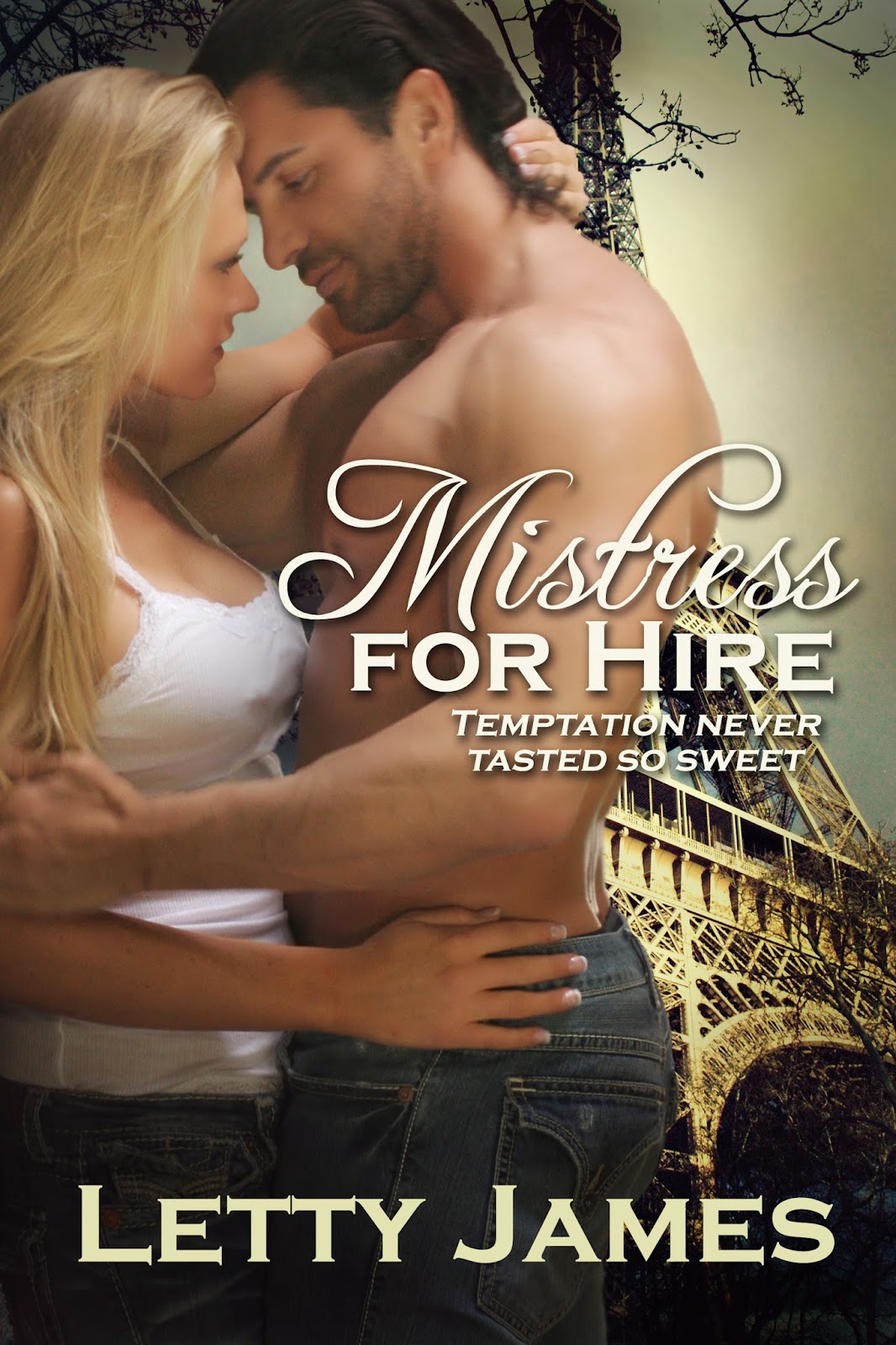 Stranded in Paris, Nikki Sommers is desperate for a job, willing to sweep the floors of a local bakery. But Gérard Beauvais knows where Nikki needs to be – not in the bakery, but in his bed. Offering her a job as his personal assistant, Gérard introduces Nikki to the workings of international business, along with the romance and beauty of Paris.

Nikki falls under Gérard’s magnetic spell, only to get a nasty surprise when she discovers she is merely a pawn in an international scandal involving her own sister. Her heart is torn between family and a love she had only fantasized about.

Will she win Gérard’s heart or only be his Mistress for Hire?

Hi Letty :) Glad to have you here.
It's fabulous to be here! Thanks for having me. Hello to all you readers. (Raising my wine glass in salute. Go ahead, pour yourself one.)

Now, to start, what inspired you to write "Mistress for Hire"?
A wonderful month-long trip to Paris. One of my best friends had the opportunity to house sit in a suburb of Paris and she invited me along. She didn't expect me to say yes to the whole month! But, how could I resist? I'm really thankful to my husband and children for holding it together while I was gone. And a big fat kiss to Skype.

How would you describe the story to someone who hasn't read it yet?
A sexy contemporary romance set in Paris. International business, family scandal, French food, an irresistible attraction -- what's not to love?

What do you think makes Gérard apealing? How about Nikki?
Gérard is just so damn bullheaded, you have to see where it takes him. He's totally undone by Nikki and doesn't know how to deal with it. Nikki sees beyond Gerard's gruff exterior. Both of them are the type to take in strays, but don't want anybody to consider them softies.

How did you create your characters? Were they inspired by real people?
Gérard was loosely based on Gérard Depardieu -- that bull in the china shop type of personality. Nikki is that little bit of me that wants to throw caution aside and just try things.

What scene did you have the most fun writing? Why?
Definitely the one at the top of Notre Dame. Even when I was up there exploring, I knew I had to write about the gargoyles. Here's a bit:

They crouched through a small door before exiting onto the walkway, the lights of the Cathedral’s square at their feet. She looked out and gasped at the famous gargoyles within touching distance. “Looks like me, oui?” Gérard mimicked a gargoyle’s protruding tongue making her laugh. He moved behind her, wrapping his arms around her waist, and they took in the city lights in silence, the Eiffel Tower a beacon in the distance.She relaxed against his chest, feeling safe and content as he sheltered her from the brisk wind whipping her dress into froth around them both. The gargoyles loomed around them as if protecting them from the world and she wished life was as easy as this bit of fairy tale. She rubbed her hands over his as if to warm them, but really wanted to touch him, to distract herself from the tears welling in her eyes. Surely, it was the wind making them water.She turned in his arms and brushed her lips against his cheek, loving the warm comfort of his skin against hers.His face had returned to its brooding repose, so much more like the fierce gargoyles than the silly look he’d made earlier. He cupped her head in his hands, his thumbs moving over her eyebrows, her cheeks, her lips. She kissed the rough skin of his fingers, trying to elicit a smile, but instead received a kiss so gentle in return it was as if Gérard’s stony exterior had been blown into granite dust.He brushed aside the whipping tendrils of her hair. “The world disappears when I’m with you.” His gaze met hers and she felt a bond grow like timeless ivy around an oak. He lifted her in a bear hug as her heart expanded with love. She wrapped her arms around him and met his sweet kiss, which turned into something more as their mouths opened to explore, duel, possess. Their kisses turned frenzied as gentleness became want, then need. His hands roamed her body, pushing her against the corner of the balustrade, his arousal as hard as the stone behind her. No longer the gentle giant, this was the man she recognized—the aggressor, the conqueror.

Why do you write romance?
Because I love reading romance, but I wasn't finding enough with a sense of humor.

How did you start writing?
Right after I got married, I challenged myself to start putting down the scenes that had been rolling around in my brain. It took a long time to finish my first book -- which everybody hated. My editor even told me to put it under my bed and leave it there. I thought that was a little harsh. In every book, there is something that can be used in a future work. I understand she's not in editing anymore, but I'm still writing and publishing so enough said, right?

Do you listen to music while you write?
I often listen to music before I write, or I'll hear a snatch of something that inspires me, but I can't write with music on. I'm one of those people who has to have a very quiet spot or a coffee shop where nobody knows me (which is hard in a small town).

Did you always want to be an author?
Let's put it this way -- ever since I was small, I was making up stories in my head. I never thought it would go this far. And, I have so many more stories I want to do!

Does your family read your books?
Hahahahaha. No. My mother hated my first book so much she didn't speak to me for three months. She was worried about my "anger issues". Romance is not my husband's cup of tea. My son is too young and my daughter is embarrassed. Although, all her friends think it's cool. I do have one aunt who also loves romance and she's been very supportive. Actually, my whole family has been supportive, but not by reading my work. They help clean house so I have more time to work :-)

What did you read as a kid?
Everything! My favorite was C.S. Lewis. Romances were something I somehow got from friends and stored under my bed. I always wanted to buy the teenybopper magazines, but my parents thought they were trash so that didn't happen. It didn't keep me from adoring David Cassidy.

Can you tell me some of your favorite authors? How about books?
Marian Keyes -- anything. C.S. Lewis -- the Narnia series. Philip Pullman -- his Dark Materials. Penny Vincenzi -- anything. Alexander McCall Smith -- 44 Scotland Street Series. Eloisa James. Mary Balogh. J.K. Rowling. So many books, so little time!

What are you currently working on?
A follow-up to Mistress for Hire, tentatively titled The Laird Needs a Wife. Set in Scotland because who can resist bagpipes and kilts? [*whispers*not me]

A few short answer questions:
Tea or coffee? Definitely tea! Strong and sweet. Irish.
Do you prefer the sea side or the mountains? Sea side. Crashing waves. Sea shells. Long walks.
Sweet or salty? Sweet. Chocolate.
Print or ebook? Print. I like to be able to share. 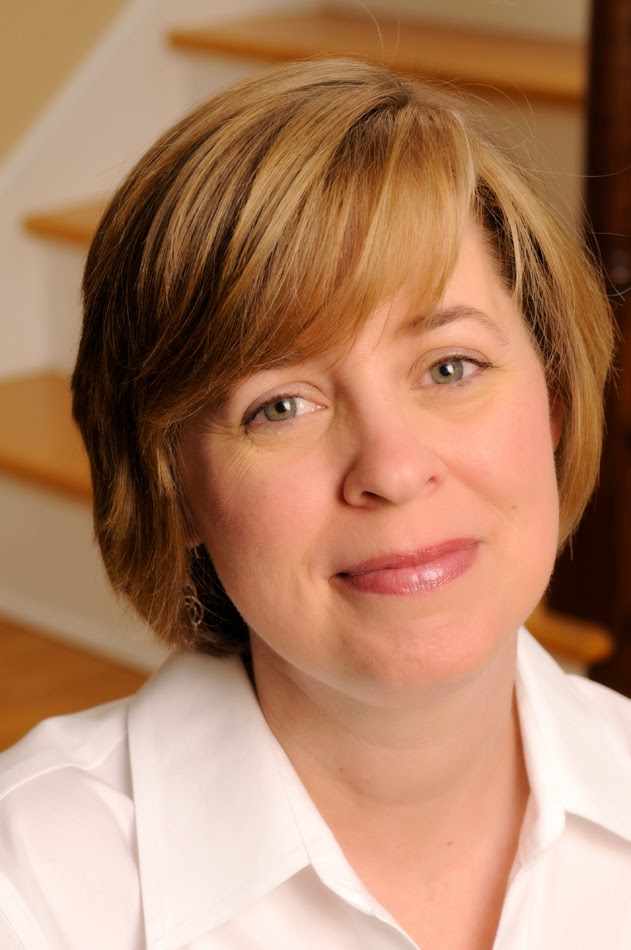 Letty James has been devouring romance novels ever since she hid under the covers reading Sweet Savage Love by Rosemary Rogers. And, yes, searching for all the sexy parts. She completed her first novel participating in National Novel Writing Month in 2005 and has been writing furiously ever since, fueled by chocolate and multiple cups of tea.

Along with writing, she enjoys reading, painting, watching movies featuring studly men, and listening in on other people’s conversations.