Spotlight: Rescued by the Buccaneer by Normandie Alleman[+Giveaway] 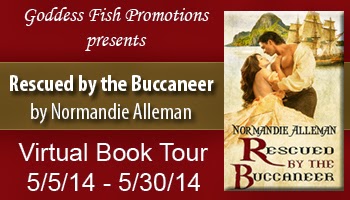 When Frederica Beauchamp boards a ship for the Americas, she dreams of a life filled with adventure, but she gets more than she bargained for when her passenger ship is attacked by pirates. The heartless men kidnap her and force her to serve their captain—a fate that might be worse than death, since though he does not have his way with her, the captain delights in baring her, shaming her, and thrashing her bare bottom as punishment for every imagined disobedience.
After the pirates bring aboard an injured man found floating in the sea, Frederica tends to his wounds and learns that he is Gaston Galette, a survivor of a shipwrecked vessel. Gaston seeks her help to overthrow the vile captain, but when their plan goes awry he is forced to use all of his wiles to save them. As the naïve girl and the seasoned sailor navigate one perilous situation after another, he informs Frederica that the only way they can survive is if he is in command, and that if she thinks things can be otherwise, she will be taken over his knee for a bare bottom spanking.
As he watches the proud, willful Frederica bow to his authority, however, Gaston worries that her growing hold on his heart will be his downfall. He knows he cannot take a woman with him when he returns to his ship and crew, but when Frederica accepts his lustful dominance completely, submitting to him with grace and beauty no other woman could match, Gaston realizes that he may never be able to let her go.
Publisher’s Note: Rescued by the Buccaneer is the first book of the Pirates of the Jolie Rouge trilogy. It is an adventure and erotic romance novel that includes spankings, sexual scenes including elements of BDSM and humiliation, and more.
~~~~~~~~~~~~~
EXCERPT
On this particular day, her daydreaming was cut short when, in the distance, a white square appeared, dipping in and out of view. On wobbly legs, she ran to find an officer. It was rare to see other vessels in the open sea, and when it occurred, the crew became nervous because they feared the other ship would be carrying pirates. And since they were sailing for the southern colonies, their route took them awfully close to the Caribbean, which was known to have pirate-infested waters.
The first mate was busy having a conversation with a midshipman, and Frederica did her best to wait patiently for it to end. But the longer the first mate ignored her, the closer the approaching ship came. Finally, she tugged at his sleeve.
He turned, making his annoyance clear with a roll of his eyes. “Yes, Miss Beauchamp. What is it now?”
Frederica knew the first mate lacked an appreciation for passengers, particularly those with a curious nature like her own. Tilting her chin haughtily, she proclaimed, “Pardon me, sir, but there is a ship approaching,” and she pointed to the dot on the horizon.
He squinted his eyes in the direction she indicated, then frowned. “Miss Beauchamp, if this is some sort of joke…”
“Whatever do you mean—a joke? Do you not see the white of the sails yon?”
“I do not.” Patronizingly, he asked the midshipman, “How about you, Davy, do you see it?”
Davy raised a hand over his eyes. “Nah, but then I can’t see a far ways.”
The first mate waved her off. “Run along, girl. Find something to occupy yourself with, and leave the men to their work.”
Inside, Frederica steamed at his dismissal of her, but she took a deep breath and tried again. “Sir, I am not playing. I see a ship on the horizon. Please alert the lookout!”
“I told you to quiet down,” the first mate snarled.
“Hmph! Fine, then I’ll alert the captain.”
“You will do no such thing! Now stop this ruckus, or I will have you detained.”
“Detain me? I am merely trying to save you from a possible ambush!” Her voice sounded high and shrill, even to her.
Just then, Cassandra tottered up on deck, her blonde hair whipping in the wind. “Frederica, I can hear you all the way down below. What is happening?”
“A ship is approaching and this fool will not order a lookout!”
Cassandra looked out to sea. “I don’t see anything…”
“But I do! Right there.” Frederica pointed again.
The first mate grabbed Frederica’s arm. “Enough!”
Adrenaline coursed through Frederica’s veins, and she spun around and slapped the officer across the cheek.
“That’s it, missy. I’ve had enough impertinence out of you.” The first mate snatched Frederica’s arms behind her and turned to Davy. “Clap her in irons.”
“Sir?” Davy asked, taken aback.
“You heard me!”
Davy ran to fetch restraints, and the first mate held Frederica tight.
“Let me go, you fool! There’s a ship and it’s gaining,” Frederica insisted.
AUTHOR Bio and Links:

A former psychologist, Normandie has always been fascinated by human behavior. She loves writing quirky characters that are all too human. Fiber arts, baking, and Pinterest are a few of her favorite pastimes. She lives on a farm with a passel of kids, an adorable husband, and a pet pig who’s crazy for Red Bull.
Follow her on:
Twitter at @NormandieA  https://twitter.com/NormandieA
Pinterest at http://pinterest.com/NormandieA
Facebook: http://www.facebook.com/pages/Normandie-Alleman
Amazon Author Page: http://www.amazon.com/Normandie-Alleman/e/B00BNUDVFW
Goodreads: https://www.goodreads.com/author/show/6893037.Normandie_Alleman
Her website: www.normandiealleman.com
Amazon: http://amzn.to/MIQL4h
Amazon UK: http://amzn.to/1dXBCU5
Barnes & Noble: http://bit.ly/OWS1Tu
ARe: http://bit.ly/1hG7am4
Kobo: bit.ly/1hLLsfS
One randomly chosen commenter will win a $50 Amazon/BN.com gift card.
a Rafflecopter giveaway
at May 22, 2014