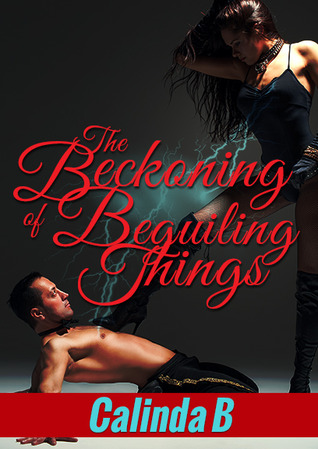 Can 24 hours really change your life? Marissa Engles is about to find out. When she heads to Las Vegas with her sisters and her best friend, she meets sexy, Thunder from Down Under dancer Chris King and hits the jackpot, in more ways than one.

A secret magical society, The Numina, is planning to influence big change in her through her interplay with King. An evil sorcerer is hell bent on preventing the exchange. A powerful male is watching her from the sidelines, making his agenda known. And King himself has a dark secret that may prove Marissa’s undoing. When all these worlds collide in one night, Marissa must choose the outcome – play it safe and walk away from heartbreak, or ignite a maelstrom of passion, mystery and transformation based on a one night stand? Everything hinges on whether she’s willing to leap without looking…
Amazon:  http://www.amazon.com/dp/B00JQP3BGA
The Beckoning of Beautiful Things
The Beckoning Series, Book I

It's Marissa Engles birthday and she's ready for change - big time. What's she looking for? Sexy, sexy, sexy, is the first thing that comes to mind. Ever since her parents died eleven years ago, completely derailing her life course, Marissa Engles has hidden inside her creativity, using her artistic expression to escape the world. It's her only island of safety from an upbringing filled with lies and deceit. What's she looking for? Sexy, sexy, sexy, is the first thing that comes to mind. Memories of magic and strange, supernatural abilities haunt her. Yearnings of excitement and passion compel her.
Sexy she wants, sexy she gets. When she meets Daniel Navid, sparks fly – literally – from her fingers to his. Daniel awakens her psychic, telepathic abilities, using them to teach her that she's far more than she ever dreamed. As her powers awaken, she’s slowly swept from her safe world into one of suspense and terror, dazzling, electrifying light, and unimaginable sensual pleasures.
With her faithful Doberman by her side, Marissa uses her creative imagination to restore her skills as a Light Rebel. As her metamorphosis continues, a world of both horror and breathtaking radiance is revealed to her. Her ultimate challenge comes through confronting pure evil - the demented sorcerer known as El Demonio de la Muerte - and through the passionate, transformation she experiences with Daniel Navid, the most powerful man alive.
Amazon: http://www.amazon.com/dp/B00C9JIK1Q
All Others: https://www.ebookit.com/books/0000002840/The-Beckoning-of-Beautiful-Things.html
The Beckoning of Broken Things
The Beckoning Series, Book II 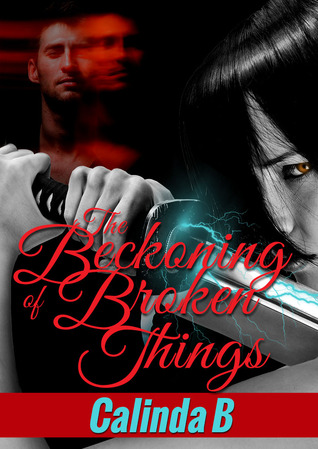 In The Beckoning of Broken Things, the second book in The Beckoning Series, bestselling author Calinda B explores suspenseful darkness laced with steaming hot passion and metaphysical discovery as Marissa Engles fights her way to her truth. Through her terrifying journey, she encounters demons and devils galore as she navigates the crazy world of Warplandia, a place of shadows and mysteries, and embraces her new reality as a wealthy woman possessing extraordinary abilities living in Brazil.

Is Marissa Engles crazy? Or is she a paranormal Light Rebel who can shape form and manifest things using the electricity buzzing through her veins? Her aunt and sister think "Crazy." The locked mental facility they've put her in thinks "Delusional."

She's so drugged up, she can't tell if they're right. She only knows she's got to get free of the mental hospital. She has to find her missing soul bound lover, Daniel Navid, who commands the darkest of the dark. Only her new pal, Rafe Caldwell, another mental patient "inmate" with more than a few dark secrets of his own, thinks she is what she says she is. And he intends to find out more - lots more. Together they embark on a journey of suspense, intrigue, magic and mayhem that takes them into paranormal worlds Marissa could not have imagined.

Reviewers say: "The steam, the intrigue, the characters, the innovative powers and how they're cosmically connected...so much better than most ordinary "powers" that supernatural beings have in paranormal romance novels."

"...there are some huge plot twists and things that you'd never expect to have happen do. I had tears at the end!!! Will there be more?"
"Calinda B pulls you right into the believable-fantasy world (which is hard to do), and doesn't hold back any punches."
Amazon: http://www.amazon.com/dp/B00EJ63166
All Others: https://www.ebookit.com/books/0000003474/The-Beckoning-of-Broken-Things.html
The Beckoning of BadAss Things
The Beckoning Series, Book III 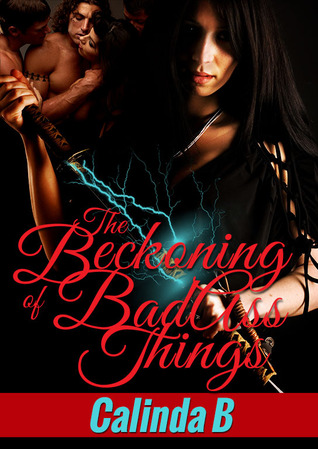 Choices, choices…should Marissa Engles choose the Night Numen, her soul bound deadly lover who walks among demons and commands the darkness, or the Stealth Numen, the trained assassin who slips between her world and the Shadowlands? They’re yummy lovers and alpha males, the baddest of the bad. She shares a potent, psychic, mind to mind connection with the Night Numen. The Stealth Numen makes her feel like a teenager. So they could just as easily kill her in a heartbeat? They both love her, right? These are the thoughts that occupy her waking hours.
Meanwhile, she’s training to go on a deadly, suspense-filled, dangerous journey in a place where Earth rules don’t apply. She needs to find the three sisters who forged her sword, and retrieve a piece of her soul. No-one has lived to tell about. She’s extremely powerful but still hasn’t attained mastery of her skills. She hopes she’ll be able to pull it together when it counts.
Just when she thinks she’s made progress, another alpha male drops into her world, challenging her assumptions about love. Will she make the right choice? And what about the ruthless sorcerer who wants to thwart her at every turn? Suspense, mystery, challenges, sizzling encounters and endless opportunities are ahead when Marissa faces The Beckoning of BadAss Things.
Amazon: http://www.amazon.com/dp/B00JQOEY7G

Excerpt from The Beckoning of BadAss Things:

I turn the corner of this gray and brown world to see Sober Dober barking at a face poking out from a rock. “Great, dog, you’re losing it, I already lost it.” I stomp to him prepared to grab his collar and haul him away from the illusion. “This is a fantasy. We’re sharing the fantasy, but it’s not real,” I tell him, glancing at the gray and brown-eyed, bulbous nosed, chapped lips apparition. “Look.” I place my hand over the face, expecting to find rock, only to find warm flesh, accompanied by a slippery, pointy tongue licking the center of my palm. I leap back in surprise.
“Hungry, little girl?” the face says, his clownish leer revealing spiky yellow teeth.
“Oh, Jesus!” I say, rubbing my hand vigorously along my jumpsuit. “Now the illusions are talking back. Sober, we’ve got to find food.”
“I’ve got some. Quite a lot, it seems.” A hand slides from the cool stone wall, holding a tray of baked chicken, rosemary roasted potatoes and green beans.
My mouth immediately waters and, despite my certainty that this is all a product of my nutrition starved brain, I reach for a drumstick.
The plate is whisked away, but not before a very real smear of chicken grease lands on my fingertips. I put the finger in my mouth and suck, eyes closing, relishing this burst of flavor. “Mmm, great illusion. More, please.” I open my mouth, expecting the food fantasy to be gone. Instead, I find another plate full of food. Hummus, Baba Ganoush, dolmas, pita bread, tomatoes, colorful bell peppers, cucumber slices, and tahini sauce all within reach, making my mouth water. I put a hand out, snagging a small cucumber slice before the plate disappears. I place it in my between my teeth and crunch, sucking the watery juices into my mouth before grinding the fragment of nutrition into a slurry. When I open my eyes, Sober’s sitting at my feet, looking up at me with those guilt-inducing, adoring eyes of his.
He whines and paws the ground.
“I’m sorry. I should have shared. What’s wrong with me?” I turn and glare at the face. “You’re being awfully stingy, you, you, you face, you! At least feed my dog.”
“I’ll feed the two of you if you like,” he says. “As much as you like. Food to take with you on your journey. I’ve got lots, you see.” A window-like gap slides open in the stone wall, revealing stores and stores of food in a well-lit cavern.
My eyes bulge in surprise.
As quickly as it opens, it’s closed with a snap. I’m so hungry I reach for my sword, ready to blast the wall into smithereens. I feel like one of those mongrels who hang around cafes in Mexico, hoping, begging for a scrap to eat.
“Ah, ah, ah, Light Rebel, I wouldn’t do that if I were you. There’s a strong protection spell on this wall preventing hooligans like you from doing such a thing.”
“Want to bet? I’ll bet I’m stronger than your spell.” Desperate is more like it. I whip The Naked Truth free from my side, pull power up from my core, take aim and let loose a stream of powerful energy. When it reaches the wall it boomerangs back into the sword and sends me staggering backwards, shocked and stunned. The sword falls free with a clatter, as I shake my scorched arm. All the hair has been burned off and the nasty burnt smell assaults my nostrils. “Ow, ow, ow! You bastard!”
“Not very smart to drop your weapon, like that. Anyone could take it.”
Before I react, his arm explodes from the rock, seizes my sword and retreats, sealing the wall, taking my weapon into his petrous domain.
“Hey!” I yell. “That’s mine!”
“Not anymore.” 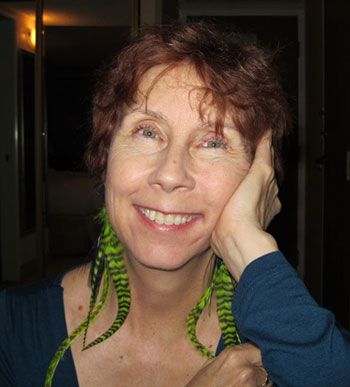 An award-winning web designer and certified SEO specialist, Calinda B has worked in the Internet industry as a web page designer/developer since the early 1990's. She has also taught web site design and computer graphics at community colleges in Northern California. In addition to writing, Calinda B creates fine art and music, and enjoys scuba diving, kayaking, and bike riding. Calinda B makes her home in the Pacific Northwest with the love of her life and her two cats. She is currently working on the fourth book in The Wicked Series, tentatively entitled A Wicked Ending, or the third book in The Beckoning Series or maybe those are done and she's working on.... She loves to write and does it daily.
Website: http://www.calindab.com
Blog: http://blog.calindab.com
Twitter: https://twitter.com/CalindaB1
Facebook: https://www.facebook.com/CalindaBauthor
Goodreads: http://www.goodreads.com/author/show/5200691.Calinda_B_
a Rafflecopter giveaway