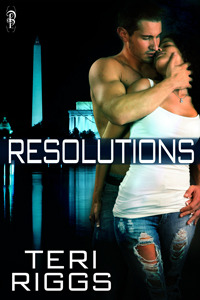 
As a teen, Mac watched his family fall apart after his mother died doing dangerous U.N. work. The possibility of losing Eve to a mission ignited an overwhelming need to protect her. When he forced her to choose him or her job, she walked away. Two years later, it seems all his nightmares have come true and he’s tasked with rescuing her from a Colombian prison. Mac has never stopped loving Eve, but does he dare risk his heart when he’s so terrified of losing…


On the run, Mac and Eve must learn to trust each other again in order to stay alive.

About the book
The book starts with Eve and her team preparing to end a mission, but unfortunately things go horribly wrong! Team members are shot at, some are killed others are wounded as Eve was. She is captured and has a VERY bad week. As you can imagine the head of the drug cartel doesn’t react nicely to being robbed from and he tortures our heroine. At the same time in the USA plans are being made to save Eve and the intel she didn’t manage to get out… those are lead by her ex, Mac.

Mac arrives in time to spare her from being raped, sadly she’s in a very bad shape: multiple contusions(I’ll come back to that), broken bones and a very nasty fever. They get her out and to a hospital and things get even more explosive from there.

What I Liked:
It was fairly fast paced and the characters were ok even if they seemed to fallow a script. The scenery was marvelous, even if we didn’t see as much as I would have liked from it.

What I didn't like:
Oh boy… I felt that the author read a random romantic suspense and took her mold from there we have:
-heroine: competent but with a soft heart
-hero: alpha ex soldier that works with a private firm that gets contracted by the guvernament
-bad dude: made as evil as possible(I am sure he breaks the necks of kitties) that wants to branch out into terrorism
-the mole: we can’t live without that one
-the action takes place in South America with some US scenes added to spice it up
It read like at least ½ of the other suspense books out there, but unfortunately it didn’t have something distinctive added to make it a little bit unique.


Besides that the Spanish words were kind of misused, there were some discrepancies(gun brands changing, contusions on different body parts), there were a lot of clichés in the language used and in some parts I felt that the author was mostly telling and not showing me the story so I could form my own conclusions.

Favorite character:
Hmm… I really liked Mac’s friend Cade(might be because the name is the same as one of my characters :D), I might read his book if there ever was one.

My least favorite character:
That idiot drug dealer, wannabe terrorist. He was so conceited and every time he opened his mouth I wanted to kick him.

Would I recommend the book:
If you want an energetic read with some romance thrown in and lots of guns and explosives, I think it’s a great book to pick up. Teri Riggs was destined to be a writer.  As a small girl she didn’t read bedtime stories, she made up her own.  Who needed Little Red Riding Hood or The Three Little Pigs when there were so many great tales bouncing around in her head?  When she grew up and became a mother to three little girls, she continued the tradition of making up bedtime stories.  On the occasions she chose to tell conventional fairytales, Teri usually gave them a bit of tweaking here and there or added a new ending.  Her girls loved it.


After her daughters had the nerve to actually grow up and leave home, Teri discovered she had a passion for writing and jumped right in.  It came as no surprise she chose to write mysteries and happily-ever-after’s since that’s the genres she loves to read.


Teri lives in Marietta, Georgia with her husband, one of her daughters and two dogs that seem to think they rule the world.  And some days Teri thinks maybe they do.


Teri still frequently tells herself stories as she falls asleep.  The only difference now is she wakes up the next morning and turns her bedtime stories into books.


Visit the other stops on the tour