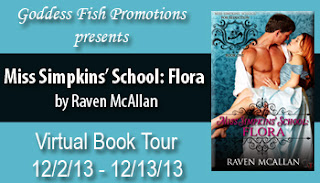 Miss Simpkins' School. Where seduction's the game, and success is the aim. Let your classes commence.


Ex mistress to an Earl, who better than Molly Simpkins to show Flora how to ensure she gets what she needs from her marriage?


Flora's intended has an idea she doesn't agree with. Angus thinks she should be happy to live at their Scottish estate while he spends his time in London. It may be the way of the ton, but it isn't going to be Flora's way. This is her chance to show Angus what he'd miss if he leaves her alone. There's only one thing—she doesn't know how.


Fraser had been told he was cold and heartless by many a person, but he knew it wasn't true. He had proper affection for anyone he bedded, and truth be told, abhorred the way men married and still went elsewhere other than their wife for satisfaction. It may be the way of the ton, but it wasn't his way. Once wed, he intended to be faithful to his wife, and she to him. So why, he mused as he washed and tugged a banyan over his head, had he spouted such rubbish to Flora? Just because her brother said she understood and accepted life was thus?


I'm an idiot. First for not telling her how I feel, and second for not showing her. Third for not explaining how I wanted our life to be, and fourth—he winced at one particular bruise inflicted in Jackson's Boxing Salon—fourth for not dodging that blow from Carruthers.


Fraser shook his head at his folly, and went back into the sitting room adjacent to his bedchamber. Newton, his valet, had left port and brandy on a side table next to the fire that still burned in the grate. He poured a modest amount of brandy into a snifter. He had a lot of thinking to do, and needed a clear head. Fraser slumped into a chair and rested his chin on his chest with his brandy glass held loosely between his fingers. How could he persuade Flora to be open and tell him how she felt, especially when he hadn't given her the same courtesy? It was a dilemma, and one he couldn’t fathom out how to solve. He closed his eyes the better to think.


It was an unexpected noise that woke him. Fraser could have sworn he'd not dropped off, but the clock on the mantle gave lie to that supposition. Over two hours had passed, and the coals in the grate barely glowed. He shivered, his bare feet were chilled, and the thin banyan was scarcely enough to warm the rest of him. At least he hadn't spilled his port. He took a hefty swallow and put the almost empty glass down, before he stood up and made sure the fire was safe. There was no point in rekindling it, and at this hour, no point in doing anything other than going to bed. He had an early morning appointment to ride in the park with Flora, and he had hoped to talk to her about putting the announcement of their marriage in the newspaper. Now he knew he couldn't do that before he'd explained what he really wanted, and seen if she agreed. If she didn't, then John, the succession, and the ton could go and hang. His mind made up, Fraser doused the lamp, and made his way to his bedchamber. The curtains were open as he preferred and there was enough moonlight to see by that a candle wasn't needed.


There was also enough moonlight to see his bed was occupied.


Guest Post on life, loves, and characters by Raven McAllan


First off all thank you for inviting me onto your blog. I freely admit trying to write something interesting, informative, and which won't bore a reader to tears, brings me out in hives. I'm just me, and still can't believe anyone wants to know about my life.


After all, what can I say? Live in Scotland, like fine wine and chocolate. Hate liver and midges—especially midges! Little buggers, they get everywhere. You almost need a net over your wine if you dare sit out in our alleged summer.


Oh and maybe I should add, growing old disgracefully. I'm what is called a TAG…third age generation, got the bus pass and even used it. Drive a sports car, with 60's music much blaring out much too loud, and dress as I like. Fantastic.


On Characters? What can I say? I do as they tell me, not the other way round. Thy shape the story. If I'm lucky I have the beginning and think (hope) I know how it's going to end. A couple of times it's been a near run thing, and we've fought a bit. So far I've come out on top, but… Oh the joys of being a pantster; you have to go with the low. But you know? I wouldn't have it any other way. I did try to write to a plot once. It was the most stilted, wooden piece of rubbish ever. Never again, I accepted that it wasn't for me. However I have every admiration for those people who can conceive a story, plot it and write it.


I guess it's like anything in life. We all like different things and do things in the way that suits us best, and thank goodness.


Hopefully, that means someone, somewhere enjoys my books. Raven lives in Scotland, along with her husband and their two cats—their children having flown the nest—surrounded by beautiful scenery, which inspires a lot of the settings in her books.


She is used to sharing her life with the occasional deer, red squirrel, and lost tourist, to say nothing of the scourge of Scotland—the midge.


Her very understanding, and long-suffering DH, is used to his questions unanswered, the dust bunnies greeting him as he walks through the door, and rescuing burned offerings from the Aga. (And passing her a glass of wine as she types furiously.)


The Raven is the harbinger of change. My Raven was around a lot after I sent Wallflowers Don't Wilt off to  Breathless Press. And then, I was offered a contract. Thanks Raven.


I live in Scotland. McAllan is a variation of the name of the BEST single malt in Scotland.


What else could I pick?


So O.K. It's a pen name, but one with deep meaning for me. I hope you enjoy reading Raven's books.


Why don't you drop me a note and say Hi?


Looking forward to meeting you.


The author will award prizes as follows:

· A $10 Breathless Press GC to one randomly drawn commenter

The more you comment, the better your chances of winning. The tour dates can be found here.