Review: Dare to Be a Duchess by Sapna Bhog 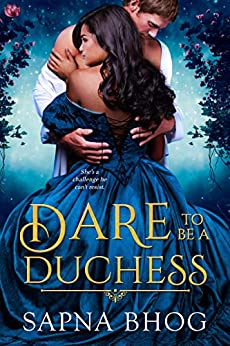 Title: Dare to Be a Duchess

Author:
Sapna Bhog
He’s a powerful duke. She’s his uncle’s ward. They have forever been at war, until one night, one masquerade, and one kiss…

Lara Ramsay is no stranger to scandal. As the orphaned daughter of a British colonel and his beloved Indian wife, whispers follow her everywhere. Not even the protection of the formidable Duke of Wolverton, a man she can’t stand, keeps the gossips at bay.

The audacious Lara has driven Tristan Wentworth, The Duke of Wolverton, to distraction since the day his uncle took her in—and he’s quite certain doing so is her favorite pastime. After catching her and his younger sister at a salacious masquerade, he’s had enough scandal and issues a marriage ultimatum: find a husband within six months or one will be chosen for her.

Unfortunately, no one in the ton appeals to her. Except, perhaps, the duke himself. The battle of wills has only just begun, and when Lara kisses him, their fate is sealed.

Sometimes even the most proper duke needs to break the rules to win the heart of the woman he loves…
I have to start by saying that I didn't love the book, but I didn't hate it either... I just wasn't blown away. I requested it from Netgaley because it ad a pretty cover :D

I am a big fan of asshole heroes and I can usually explain away their mildly shitty behavior, but I had a really big problem with it this time. Wolf, the hero is, supposedly, a stick in the mud, virtuous dude, but he kisses the heroine in ch 3 or so and then he kind of insults her. They kiss again and again he acts like an idiot. They start spending time together and when he sees he's falling for her, he totally destroys her tenuous social standing and, to make everything better *insert heavy sarcasm*, he totally destroys her in private. After all this, the next day he decides he's in love with her and that he can't live without her and starts trying to apologize to her and make stuff better. This dude legit gave me whiplash!

The heroine, Lara, is pretty ok. She has a really hard time in the Ton because she's half Indian and the inbred assholes are mocking and not accepting her. She's different and she's not afraid to show it. She's skirting propriety and going with her 2 other friends to some parties that aren't that straight laced so to say... She's also a feminist with her 2 other friends, but that's been told not shown...

One of my pet peeves is stupid names and the author has named the hero Wolf and his 2 other friends Leo and Hawk and I totally hate it. Those are actually their nicknames, but they aren't called anything else for most of the book, so I rolled my eyes every time I saw it.

All in all, it wasn't bad, but I think I expected something else so i had a lower tolerance for it then usual.
Rating: