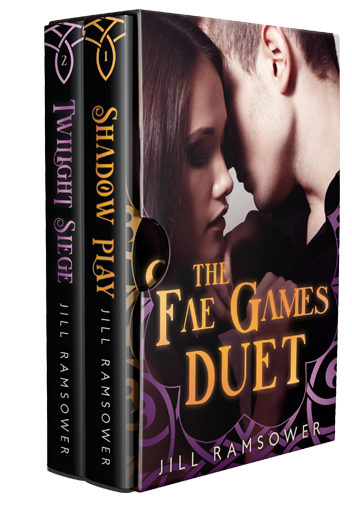 When Rebecca Peterson walks away from everything she knows to follow her dreams in Ireland, she never expects to be thrown into a world of vicious Fae and deadly secrets. On the dreary streets of Belfast, her terrifying nightmares are rekindled, and this time they aren’t confined to her imagination. Complicating her life further, Becca crosses paths with two mysterious strangers—both alluring in different ways, but are either of them to be trusted?
Her journey takes her deep into the treacherous Shadow Lands, where both her knowledge and courage will be tested. Navigating this new landscape of deceit and manipulation is paramount if she is to stop hordes of blood-thirsty Faeries from invading Earth. With time running out, will her limited training be enough to take on a centuries old enemy hell-bent on death and destruction? To keep those she loves safe, Becca is willing to risk it all.
In this captivating duet, Jill Ramsower takes her readers from the streets of Belfast on a harrowing journey to the most dangerous corners of Faery, where fear is a lethal enemy and trust is a luxury few can afford.

Hi Jill Ramsower  :) Glad to have you here.

Now, to start, what inspired you to write the "Fae Games"?

My initial inspiration is from my all-time favorite books, the Fever series by Karen Marie Moning. I think she is a genius and I wanted to be able to tell a story like she did. I knew that it was overly ambitious for my first project out of the gates, but that was what inspired me, so I ran with it. I know I’m not in her class yet, but maybe someday…

The duet focuses on an American girl named Rebecca who moves to Ireland for a new job and discovers the world of the Fae. She has a sassy BFF who helps her along the way and encounters a couple of mysterious Fae men who complicate her life. (No love triangle, phew!) In a sentence, I’d say the books are a fast-paced romantic adventure in a world where fantasy and mythology collide.

Describe Lochlan and Becca in 3 words each.

What do you think makes Lochlan appealing? How about Becca?

Lochlan doesn’t take crap from anyone and is a powerful, competent leader—those characteristics combined with a weakness for a special lady makes a man irresistible in my eyes. As for Becca, she is grounded and that is huge for me—I hate when female characters get overly dramatic and do dumb stuff. She’s courageous, persistent and loyal to a fault.

I didn’t intend to write my characters based on myself, but as they developed, I came to realize that Becca and her best friend, Ashley, were essentially two versions of me. All growing up I was very quiet around people—I didn’t have a ton of friends and preferred reading to going out. I struggled with anxiety and it often kept me from being who I wanted to be. When I was able to overcome the anxiety issues, I truly became a different person. Becca is based off my more reserved and pensive side whereas Ashely is my outgoing, adventurous side.

That’s tricky because the scenes that are the most fun to write are the pivotal moments that I simply can’t spoil. The final chapter of Shadow Play was a favorite and chapters 10 & 11 in Twilight Siege. Particularly poignant moments are also fun so I’ve included an excerpt below from Chapter 14 of Shadow Play where Becca and Lochlan have a rare tender moment.

“I’m sorry, Lochlan, about doubting you and spying on you. Everything in my world has been flipped upside down and even though I want answers, it was wrong of me to jump to conclusions.”
“You should never have been involved in any of this to begin with.” His hard voice was firm and didn't bode well for accepting my apology.
“Please don’t force me away, I need your help, I need to be a part of this.”
“You don’t need anything, don’t be absurd.”
“Will you take me with you to the portal tonight?”
“Jesus, you’re persistent,” he said in exasperation as he stood and walked to the bookcase along the wall, placing his hand on a shelf with his back to me. Almost under his breath he asked, “What am I going to do with you?”
I could tell his question was rhetorical, but I responded anyway. “Do you really want me gone?” My hands clasped together in front of me and my traitorous eyes began to burn with unshed tears.
He faced me, his features hard and he strode to me, his mouth colliding with mine. His strong hand on the back of my neck tilted my head up to give him better access to my mouth as his other hand reached behind my back and pressed my belly against his solid front. Taking advantage of my surprise, his tongue dove between my lips with a possessive thrust and my hands fisted in his shirt.
I hadn’t known that I wanted this assault, but his body against mine felt like coming home, and I was instantly swept up in the kiss. My skin ignited as he consumed me and I could feel my core desperately clench in need. Just as I started to lose myself in his arms, he slowly pulled back and I tried to catch my breath as he spoke in a low rumble.
“It would seem that I don’t know what I want.”

Why do you write fantasy romance?

Someday I’ll probably do other types of romance novels, but I don’t think I’ll ever write anything without romance. When I read books, if there’s no romance I lose interest fast, so I can’t image I’d ever want to write a story that doesn’t contain a predominant romantic thread.

I started small—taking notes on who my characters would be, what would bring them together, what might keep them apart, what obstacles would they overcome, and so on. When I had crafted the characters and locations, I started with a super basic outline of events—girl goes to Ireland, girl discovers Fae, girl meets boy…Then I would flesh out and add to each area until little by little the story encompassed a full book. The next two books have been the same. I know who I want to write about, then I get to daydream their story into existence.

Nope, I write in the quiet, if I can find any in a house with a husband, three kids, three cats, and two dogs.

I had no idea I wanted to write. I always loved research, which was one of the big reasons I went to law school. I hadn’t written anything besides legal documents since high school creative writing class. (And that had been a long, long time. Long time.) Several years ago, I decided to try to write and didn’t get a whole chapter written before I gave up, thinking I had no idea what I was doing. This time everything just clicked. I’m 40 years old and out of nowhere I discovered I had a passion, who knew?

My husband, parents, and best friends are all a big part of my writing process. They all act as beta readers and give me loads of amazing advice on the basic story. Once I’m happy with the foundation, I send the book to my editor and let her do her thing. Then I make rewrites according to her suggestions, have my husband read the book AGAIN, make more tweaks, then send the book to my dad for a proofread. (We have an unspoken agreement not to discuss any of the steamy scenes in the books.) So far the system has worked out beautifully and I’m so grateful for all of their help!

What did you read as a kid?

I can’t even remember what I read as a child except that Little Women and The Outsiders made me cry hysterically and I hate crying. When I was younger I read all the Babysitter’s Club books and then moved on to young adult historical romances. I will say that Jane Austen has always been a favorite, in particular, Pride and Prejudice. I do love a bad boy and Mr. Darcy was the original.

Hands down my fave is Karen Marie Moning, she is my idol.
Some of my other go-to authors are Cassandra Clare, Sarah J. Maas, Callie Hart, LJ Shen, Ashley Zavarelli, Bella Jewel and I can’t forget Miss Kristen Ashley. If you’re curious about what else I’ve read and reviewed, check out my Goodreads page!

Shades of Betrayal will be out December 1, 2018 and I’m super excited about it. I brainstormed and discussed the Duet with friends and family, but this book just took shape so quickly on its own that not a single person knew anything about it aside from myself. The book is set in The Fae Games world and tells Ashley’s story, basically picking up where Twilight Siege left off. Ashley is sarcasm and wine and everything fine—early readers are loving her character and I’m excited to share her with the world!

In addition, I’m currently writing the fourth book that will be out sometime in the Spring of 2019.

A few short answer questions:
Tea or coffee?
NEITHER! They both taste like dirt-water to me J

Do you prefer the sea side or the mountains?
I enjoy both but my preference is the mountains, they’re just so beautiful!

Print or ebook?
I do love print books but I gave in years ago to the temptation of cheaper reads and converted to kindle.

Movies or TV shows?
Definitely movies—I have a short attention span and can never get far into a TV series.

Thanks for having me!!

Author Bio:
Jill is a Texan, born and raised. She manages the hectic social calendars for her three active children and occasionally spends an evening with her dashing husband. Aside from being an author and a mom, she’s an attorney, travel junkie, and voracious reader.