It’s release day for Love Laughter and Steamy Ever Afters!! I am so excited about this sexy boxy set from ten bestselling authors. Check out all the fantastic release day goodies, including several excerpts and a giveaway, now!! 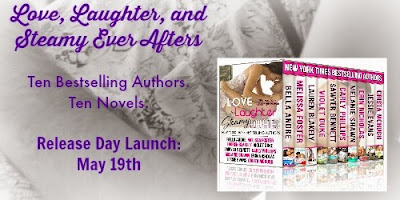 From the hot big city heroes that make us melt, to the sassy small town heroines that make us smile, this limited edition collection has something for everyone. Ten sexy and sweet full-length novels—a wide mix of fun, heart-tugging, addictively romantic love stories—each handpicked by an all-star gathering of ten of today’s most popular contemporary romance authors.

-- Over 97% off retail for the individual books sold separately (a forty dollar savings!) -- Only available until June (So snag your copy today)

SAWYER BENNETT – On the Rocks (The Last Call)

ERIN NICHOLAS – Out of Bounds (Boys of Fall)

CRISTA MCHUGH – Falling for the Wingman (The Kelly Brothers)

He moved to sit up straighter on the bed and Todd shook his head. “You’re fine just like that. I know your skull must hurt like hell.” He nodded back to the doorway. “Are you ready to see Ms. Harris and her daughter, Summer?”

No, he thought, he’d be better off never seeing those eyes again.

He’d thought about Megan and her daughter one too many times for comfort. Not just because he was reviewing the rescue, trying to look for what he could have done differently, to have gotten them out faster and more safely—but because he hadn’t been able to forget her strength, how hard she’d fought to stay conscious, and what a fighter she’d been every single second of the harrowing journey from her burning apartment.

Still, he understood that fire victims often felt compelled to say thank you to the men who had saved them. Especially in a case like this, where they’d just barely held death at bay.

“Sure.” He began to nod, but a sharp shooting pain stopped him halfway into the movement.

Catching his grimace, Todd said, “I’ll ask Megan and her daughter to come back later.”

Her name fit her, Gabe had found himself thinking one too many times. Megan was pretty and strong all at the same time. It would be better to think of her as Ms. Harris. Although, he had to wonder, was there a husband? And if so, where had he been during the fire and why wasn’t he here with them now?

She’d say thank you, he’d tell her he was happy to see her and her daughter doing so well, and that would be that. No more being haunted by her eyes, by the surprising strength she’d shown him as she’d crawled on the floor of her apartment and down the stairs.

A couple of minutes later, Todd walked back in with the mother and daughter. Ignoring the pain in his head, Gabe sat up higher and forced a smile on his face.

And then, his eyes locked with Megan’s and his smile froze in place.

My God, he found himself thinking before he could shove the thought away, she’s beautiful.

The last time he’d seen her face it had been through a thick haze of dark smoke and the knowledge that one wrong move meant their lives were over. Her eyes were just as big and pretty, her limbs looked as lean and strong as they had when he’d been helping to move her along the floor, but now he could see the softness in her, the sweet curves of her breasts and hips in her T-shirt and jeans. He couldn’t stop staring at the startling green of her eyes, the silky dark hair falling across her shoulders, and the way her pretty young daughter was a carbon copy of her, the only difference their hair color, one dark, one light.

She seemed just as stunned as he and for a long moment, the two of them just stared at each other in silence until her daughter ran over to him and threw her arms around him.

She felt his eyes on her before she saw him.

Her body recognized the intensity of that stare as if it were hardwired to her directly.

The guys were all but forgotten now. Hell, the whole room faded away like white noise as she watched Hudson climb into the ring.

Lia enjoyed watching him move. There was nothing hurried about his motions; he always seemed relaxed and confident, efficient and ready. He wasn’t intimidating in that built-like-a-fridge way her friends who’d played football in college were. Rather, he was leaner. But infinitely harder. More etched out of wood than molded out of clay. As such, running into his chest was literally like running into a wall.

“You’re killing me.” His voice simmered, soft and low, with a lazy smile curving his lips to show his words were more compliment than complaint. It took just one glance at the throbbing pulse in the muscular column of his neck for Lia to know he wasn’t nearly as unaffected as he sounded.

Then all analysis of the man scattered when he went and peeled his shirt up over his head, sending those granite-etched muscles of his back rippling and expanding. His eyes tangled with hers as he toed off his shoes and immediately, Lia felt a surge of adrenaline override any female reaction she’d normally have to the sight.

Because the man was doing something so much better than flirting.

He was inviting her to play.

No gloves. No strike pads.

With a slow grin, she snagged her teeth around the Velcro bindings on her MMA gloves and started stripping off the boxing tape underneath as well.

This was exactly the kind of sparring she’d been craving for weeks now.