Review: Beauty and the Beast by Shoshanna Evers 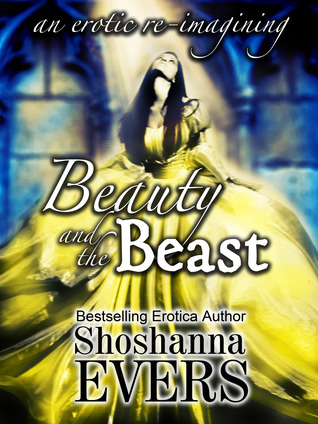 With her father’s freedom at stake, Belle agrees to be the fearsome Beast’s prisoner in his enchanted castle. Held as his willing captive, Belle must submit to the Beast’s most primal desires to survive.

The Beast can’t let his little Beauty go free, not while there’s still hope that she might be the one to end his decade-long curse…and with true love’s kiss, return him to the Prince he once was.

Their story is one that begins with imprisonment—he in his monstrous body, she in a dungeon—but without this predicament, Beauty would never have met the Beast.

So we shall begin with what occurred on that fateful night when everything changed: when a lover was betrayed, a man deformed, and a castle shrouded in an enchantment…

I have to state from the start: non consent makes me uncomfortable. I don’t like it in my books and I tend to over-react when I do read a story that has it. Unfortunately this is one of them…

We’re talking about a re-telling of the much loved “Beauty and the Beast”. We all know that Beauty is imprisoned by the Beast, but him coercing her into a sexual relationship so she can have her freedom… no, just no. I wouldn’t have had a problem if they started to talk and getting to know each other and they fell into bed/ Ds relationship as a next level so to say, but him making it the condition of her release sucks. It kind of went like this:

“Beauty, I’ll let you go faster if you become my sex slave. No pressure or anything, it’s still your choice.”

Another thing that made me doubt my book choosing skills was that she actually had sex with him when he was into his beast form. He was a mix of lion and wolf with a cock almost as big as forearm(no, it’s not my exaggeration) and she, a virgin, had sex with him. And she had an orgasm while doing it.

Let’s say I get over this part… I can’t forgive him for leaving her chained up and naked in his honest to god dungeon! What is wrong with you dude?! Where is it ok to leave a woman like that, one that you’re supposed to make fall in love with you?

I’ll be honest now, I like Ms. Evers’ writing style. She doesn’t have drama-llama here(thank god) and I loved how I felt pulled into the story(even if I totally don’t agree with the aspects I mentioned). All in all I’ll try some other books by her, but only after I’m sure that I’ll be comfortable with the genre/subject.