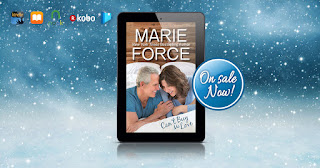 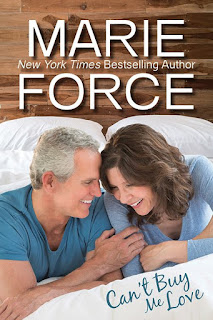 BLURB:
Mary Larkin was hard at work as the office manager at the Green Mountain Country Store when Cameron Murphy brought her dad, Patrick, in to visit. That fateful first meeting, which took place in You’ll Be Mine, sets the stage for Mary and Patrick’s long-awaited romance in Can’t Buy Me Love! Mary enjoys her predictable, satisfying life in Butler. If it’s a little lacking in excitement, well, that’s okay with her. But after meeting Patrick and getting to know him better at his daughter’s wedding, Mary is intrigued by the well-known, sexy billionaire businessman. Patrick is equally intrigued. For the first time since he suddenly lost his wife thirty years ago, he has met a woman who makes him feel less lonely, and all he wants is more of his Sweet Mary from Vermont. Flirty phone calls become a weekend away together that takes his relationship with Mary to the next level. But with six hours and two vastly different lives standing between them, can Mary and Patrick find happily ever after together? And after telling her father to keep his hands and everything else off Mary, will Cameron approve of her father’s new romance?
------

“Hi,” she said, possibly never so happy to see someone in her life. “Remember me?”
His lips quirked.
Yep. He remembered her all right. “I’ve got a problem,” she said.
His smile faded. “You okay?”
She exhaled, feeling like an idiot. “There’s a big bug in my tub and the sink is dripping. Do you have time to help or are you off the clock?”
He studied her for a beat. “I’ll grab some tools and be right up,” he finally said.
She watched him stride off. Maybe she couldn’t find her feels, but apparently she could still appreciate a nice ass.
Good to know.
Five minutes later there was a simple, firm knock at her door. She opened it and stood back to let him in, but he remained on his side of the doorway, toolbox in hand.
“I’m Mick Hennessey,” he said.
Great, but she had no time for introduction. Bug in her tub! “Nice to formally meet you, Mick, but…” She pointed to the bathroom.
With a mock salute, he ambled in there.
Quinn remained right where she was, counting off the seconds while she heard nothing. “Did you get him?” she finally called out.
“The bug?” he asked.
“No, the president of the United States! Yes, the bug!”
The only response was the sound of the toilet flushing and she panicked. “You squished him first, right?”
Mick stuck his head out of the bathroom and flashed her a smile. “Worried he’s going to swim his way back up and bite you on the—“
“No!” Yes…
He vanished back into the bathroom. Quinn heard some other sounds that were hopefully related to him working on the stink. Unable to stop herself, she made her way over there and peered in. “Where’s your dog?”
“Coop? With my mom. She lives here in town and made stew. Apparently, I don’t rate on the same scale as beef stew.” He was on his back, head and shoulders wedged beneath the sink, legs bent at the knees because he was longer than the bathroom. He wore a T-shirt advertising some pub in San Francisco named O’Riley’s, that had risen up, revealing his low-slung jeans and some impressive abs, including those V muscles that made women so stupid.
“Can you fix it?” she asked.
His hands looked confident working the wrench before he pulled his head from beneath the sink and sent her a slow smile.
At the barely recognizable flutter low in Quinn’s belly, and also decidedly south of her belly, she froze in shock. She’d felt next to nothing for a very long time, but it hadn’t been so long that she couldn’t place this for what it was.
Lust.

Marie Force is the New York Times bestselling author of more than 50 contemporary  romances, including the Gansett Island Series, which has sold nearly 3 million books, and the Fatal Series from Harlequin Books, which has sold 1.5 million books. In addition, she is the author of the Butler, Vermont Series, the Green Mountain Series and the erotic romance Quantum Series, written under the slightly modified name of M.S. Force. All together, her books have sold more than 5.5 million copies worldwide!
Her goals in life are simple—to finish raising two happy, healthy, productive young adults, to keep writing books for as long as she possibly can and to never be on a flight that makes the news.
Join Marie's mailing list for news about new books and upcoming appearances in your area. Follow her on Facebook, Twitter @marieforce and on Instagram. Join one of Marie's many reader groups. Contact Marie at marie@marieforce.com.