Spotlight: Burn For Me By Ilona Andrews[+giveaway] 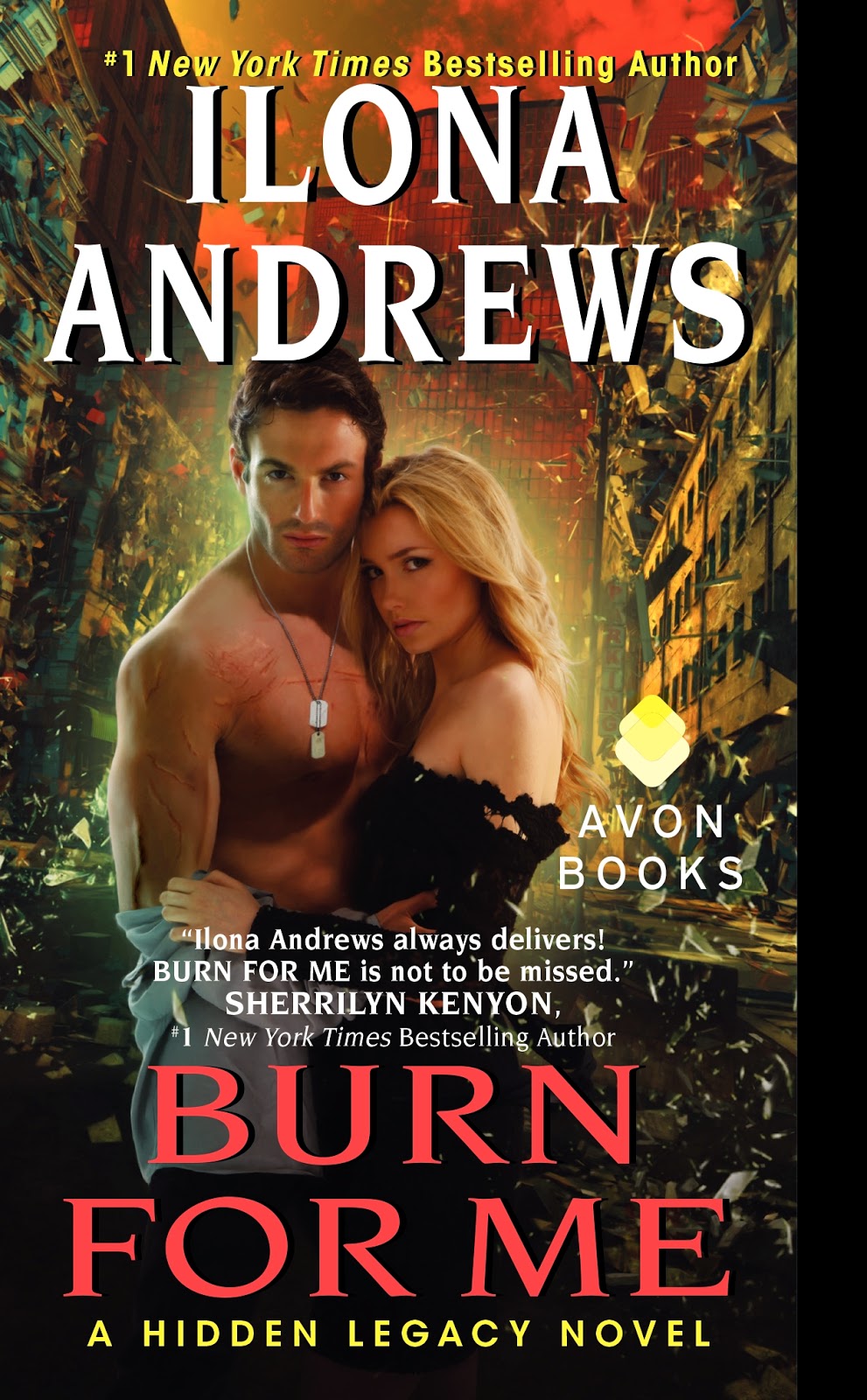 Nevada Baylor is faced with the most challenging case of her detective career-a suicide mission to bring in a suspect in a volatile case. Nevada isn’t sure she has the chops. Her quarry is a Prime, the highest rank of magic user, who can set anyone and anything on fire.

Then she’s kidnapped by Connor “Mad” Rogan-a darkly tempting billionaire with equally devastating powers. Torn between wanting to run or surrender to their overwhelming attraction, Nevada must join forces with Rogan to stay alive.

Rogan’s after the same target, so he needs Nevada. But she’s getting under his skin, making him care about someone other than himself for a change. And, as Rogan has learned, love can be as perilous as death, especially in the magic world.

Prologue
“I can’t let you do this. I won’t. Kelly, the man is insane.” Kelly Waller reached over and touched her husband’s hand, looking for reassurance. He took his hand off the wheel and squeezed her fingers. Strange how intimate a touch can be, she thought. That touch, fueled by twenty

years of love, had served as her rock in the nightmarish storm of the past forty-eight hours. Without it, she would have been screaming.

“You told me yourself he hates his family.”

Tom stared straight ahead, glassy eyed, guiding the car up the curve of the driveway. Old Texas oaks spread their wide canopies over the grassy lawn, sprayed with drops of yellow dandelions and pink buttercups. Connor wasn’t taking care of the grounds. His father would’ve had the weeds poisoned . . .

The driveway brought them to a tall stucco wall. She raked her memory. Sixteen years was a long time, but she was sure the wall hadn’t been there before.

A wrought-iron gate blocked the arched entrance. This was it. No turning back. If Connor decided he wanted her dead, her magic, what little of it there was, wouldn’t be enough to stop him.

Connor was the culmination of three generations of careful marriages aimed at bolstering the family’s magic and connections. He was supposed to have been a worthy successor to the fortune of House Rogan. Much like her, he hadn’t turned out the way his parents had planned.

Tom parked the car. “You don’t have to do this.”

“Yes, I do.” The dread that hung over her mugged Kelly, setting off a wave of overwhelming anxiety. Her hands shook. She swallowed, trying to clear her throat. “This is the only way.”

“At least let me come with you.”

“No. He knows me. He might see you as a threat.” She swallowed again, but the clump in her throat refused to disappear. She never knew if Connor could read people’s thoughts, but he was always aware of emotions. She had no doubt they were being watched and probably listened to. “Tom, I don’t think anything bad will happen. If some- thing does, if I don’t come out, I want you to drive away. I want you to go home to the kids. There is a blue folder in the cabinet over the small desk, the one in the kitchen. On the second shelf. Our life insurance policies are in there, and the will . . .”

We’ll deal with it ourselves.”

She jerked the car door open, jumped out, and hurried to the gate, her heels clicking on the pavement.

She forced herself to touch the iron gates. “This is Kelly. Connor, please let me in.”

The iron gate slid open. Kelly raised her head and stepped inside. The gate glided shut behind her. She walked through the arch and up the stone path that wove its way through the picturesque copse of oaks, redbuds, and laurels. The path turned, and she stopped, frozen.

The large colonial beast of a house with white walls and distinguished colonnades was gone. In its place stood a two-story Mediterranean-style mansion, with cream walls and a dark red roof. Had she gone to the wrong property?

“Where is the house?” she whispered. “I demolished it.”

Kelly turned. He stood next to her. She remembered a thin boy with striking pale blue eyes. Sixteen years later, he stood taller than her. His hair, chestnut when he was younger, had turned dark brown, almost black. His face, once angular, had gained a square jaw and hard mascu- line lines that made him arrestingly handsome. That face, suffused with power, harsh but almost regal . . . It was the kind of face that commanded obedience. He could’ve ruled the world with that face.

Kelly looked into his eyes and instantly wished she hadn’t. Life had iced over the beautiful blue irises. Power stirred deep in their depth. She could feel it just beyond the surface, like a wild, vicious current. It bucked and boiled, a shocking, terrifying power, promising violence and destruction, locked in a cage of iron will. A chill ran from the base of Kelly’s neck all the way down her spine.

She had to say something. Anything.

“Dear God, Connor, that was a ten-million-dollar house.”

He shrugged. “I found it cathartic. Would you like some coffee?”

He led her through the doors into a lobby, up a wooden staircase with an ornate iron rail, to a covered balcony. She followed him, slightly dazed, her surroundings a vague smudge until she sat down on a plush chair. Be- yond the rail of the balcony, an orchard stretched, the trees weaving their way around ponds and a picturesque creek. Far at the horizon, the bluish hills rolled, like distant waves.

She smelled coffee. Connor was standing with his back to her, waiting for the coffeemaker to fill their mugs. Establish a common ground. Remind him who you are. “Where is the swing?” she asked. It had been the favorite hangout of the Rogan kids. That’s where they’d gone when he’d had to ask her advice, back when he was twelve and she’d been the cool older cousin Kelly, twenty and wise in all things teenager.

“It’s still there. The oaks grew and you can’t see it from the balcony.” Connor turned, set her cup in front of her, and sat down.

“There was a time you would’ve floated the cups over,” she said.

“I don’t play games anymore. At least not the kind you remember. Why are you here?”

The coffee mug was burning her fingers. She set it down. She hadn’t even realized she’d picked it up in the first place. “Have you watched the news?”

“Then you know about the arson at First National.” “Yes.”

“Gavin Waller is my son,” she said. The words sounded hollow. “My son is a murderer.”

“I love my son. I love Gavin with all my heart. If it was my life against his, I would die for him in an instant. He isn’t an evil person. He’s a sixteen-year-old child. He was trying to find himself, but he found Adam Pierce instead. You have to understand, kids idealize Pierce. He is their antihero—the man who walked away from his family and started a motorcycle gang. The bad boy charismatic rebel.”

Her voice turned bitter and angry, but she couldn’t help it.

“He used Gavin to commit this atrocity, and now a police officer is dead. The officer’s wife and their two children were burned very badly. They will kill Gavin, Connor. Even if my son walks out with his hands in the air, the cops will shoot him. He is a cop killer.”

Connor drank his coffee. His face was perfectly placid.

She couldn’t read it.

“You don’t owe me anything. We haven’t spoken in twenty years, not since the family disowned me.”

She swallowed again. She had refused to follow their instructions and marry a stranger with the right set of genes. She’d told them she wanted to be in control of her own life. They’d obliged and thrown her out like a piece of garbage . . . no, don’t think about that. Think about Gavin.

“If there was any other way,” she said, “I wouldn’t bother you. But Tom has no connections. We don’t have power, or money, or great magic. Nobody cares what hap- pens to us. All I have now are our childhood memories. I was always there for you when you got in trouble. Please help me.”

“What is it you want me to do? Do you hope to avoid the arrest?”

She detected a hint of cynical disapproval in his voice. “No. I want my son to be arrested. I want a trial. I want it to be televised, because after Gavin spends ten minutes on the stand, everyone will recognize exactly what he is: a confused, foolish child. His brother and sister deserve to know that he isn’t a monster. I know my son. I know that what he’s done is tearing him apart. I don’t want him to die, gunned down like an animal, without ever having a chance to tell the family of the people he killed how deeply sorry he is.”

I’m begging you for my son’s life.”

Connor drank his coffee. “The name is Mad Rogan. They also call me the Butcher and the Scourge, but Mad is the most frequently used moniker.”

The pressure of his gaze ground on her.

Her lips trembled and she said the first thing that popped into her mind. “You’re a mass murderer.”

He smiled, his face cold. No humor, no warmth, just a vicious predator baring his teeth. “It’s been forty-eight hours since the arson, and you are just now here. You must be really desperate. Did you go to everyone else first? Am I your last stop?”

His irises sparked with electric, bright blue. She looked into them, and for a split second she glimpsed the true power that lay inside him. It was like staring into the face of an avalanche before it swallowed you whole. In that moment she knew that all of the stories were true. He was a killer and a madman.

“I don’t care if you’re the devil himself,” she whis- pered. “Please bring Gavin back to me.”

Five minutes later, she stumbled down the driveway. Her eyes watered. She tried to stop crying but couldn’t. She had accomplished what she’d come here to do. The relief was overwhelming.

“Kelly, honey!” Tom caught her.“He’ll do it,” she whispered, shell-shocked. “He promised he would find Gavin.” 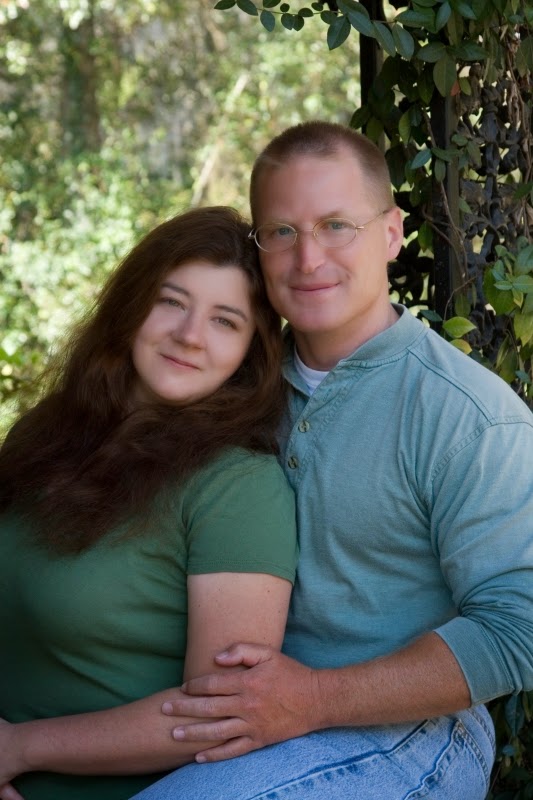 “Ilona Andrews” is the pseudonym for a husband-and-wife writing team. Ilona is a native-born Russian and Gordon is a former communications sergeant in the U.S. Army.

Contrary to popular belief, Gordon was never an intelligence officer with a license to kill, and Ilona was never the mysterious Russian spy who seduced him.

They met in college, in English Composition 101, where Ilona got a better grade. (Gordon is still sore about that.) They have co-authored two New York Times and USA Today bestselling series, the urban fantasy of Kate Daniels and the romantic urban fantasy of The Edge and are working on the next volumes for both.

They live in Texas with their two children and many dogs and cats.