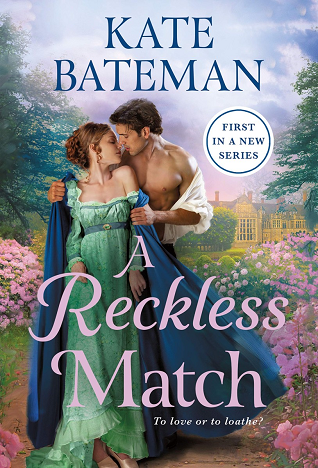 Title: A Reckless Match
Series: Ruthless Rivals #1
Author: Kate Bateman
The first in a new regency romance series about two feuding families and reunited childhood enemies whose hatred turns to love.
Maddie Montgomery's family is in debt, and her hope rests on the rival Davies clan missing their yearly “pledge of goodwill,” ceding the land that separates their estates. With Maddie's teenage nemesis, Gryffud “Gryff” Davies, Earl of Powys, away, hope is in reach.
But then, Gryff shows up and is stunned that the tomboy he once teased is now a woman. When Gryff and Maddie discover contraband on their land, they realize it can benefit both families. But they've also uncovered a dangerous plot, and they need to work together to get out alive. Soon, their hatred for each other starts to feel more like attraction.
Kate Bateman brings crackling banter, steamy romance, and a dash of adventure into the first book in the Ruthless Rivals series.
This book was so much fun! It's the start of a new series by Kate Bateman that centers around 2 "waring" families, like in Rome and Juliet. The thing is, these stories have happy endings!
Maddie and Griff have known each other since they were children. They have also taunted each other and fought since then. Besides no love lost between their families, the book also has a sub plot of smugglers.
As I said, I had a lot of fun reading this book. besides the main characters we get introduced to both of their families. They are really intertwined and besides that, they are really interesting. The 2 aunts from the Montgomery part of the family are outrageous and they stole the show with their every appearance. I can't wait to see what will happen next in this series.