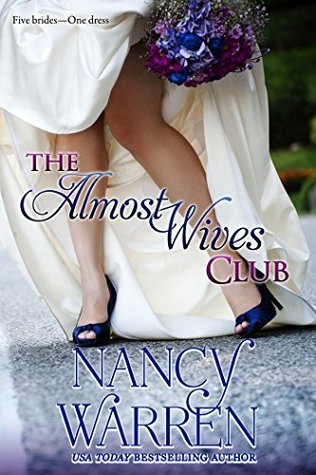 I started reading Ms Warren's paranormal cozy mysteries, but I unfortunately am up to date on that series(Vampire Knitting Club series, AMAZING), so i decided to try more of her work. I am so happy that I did!

This is the 1st book in a 5 book series, a romantic comedy, about a seemingly cursed wedding dress. The series starts with Kate who is at a dress fitting for her wedding gown. She's not feeling as a bride should, but she keeps telling herself that's just the stress of work and a big society wedding. She keeps telling herself that when she meets her fiance for dinner, when ted leaves her for a business meeting, and when a guy hits on her after her prospective groom leaves. She decides to just go to Ted's home to talk it out with him. She has the surprise of a lifetime when she sees the guy she left at the restaurant deliver a report to her fiance, his parents and her mom about how faithful she is to Ted. Things blow up from there and a lovely story emerges.

I liked how Kate got the courage to do the hard thing and the good thing for her. She didn't let herself be beaten down and she staid true to herself. Kate took time for herself and to figure out her next move, I enjoyed seeing her recognize her mistakes and being strong in her convictions.

The hero ended up being the PI guy sent to spy on her. I didn't expect that twist at all! Nick's a stand-up guy that decided to do an old collage roommate a favor, and that favor ended up being the best thing that happened to him. I loved his charm and that he was the first one to recognize his feelings and that he gave Kate time to come to terms with hers.

This was a fun read and I am so very invested now to see what happens to the dress!