Spotlight and Interview: A Vampire's Tale by Maya Tyler. 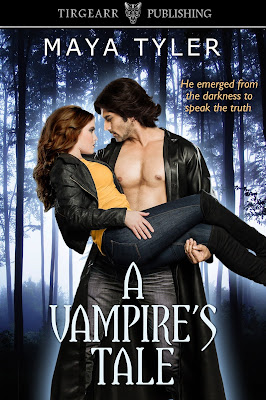 Marisa Clements was never satisfied writing the ‘gossip column’ in the local paper so she quit her job to follow her dream of writing fiction. Floundering in an unforgiving industry, she wrote about vampires, a popular subject she considered fascinating but as real as unicorns, to pay the rent.

Corgan Halton was tired of human misconceptions about vampires. He planned on telling Marisa his story and end his existence. It was no coincidence Corgan selected Marisa to write his story. With the ability to see the future, he knew she would be a major part of it. He knew she would be the one to help him die, but in doing so, she’d be doomed to the same fate. Once they met, their futures would be irrevocably intertwined.

Corgan began caring for Marisa and finally revealed the truth to her. He admitted his quest to atone for his past sins had put her in grave danger from a nest of revenge-seeking vampires. Corgan must claim her for her own protection. But claiming her is not enough, he must ask for help from his wizard friends and his maker in order to destroy his enemy or Marisa will never be safe.

Hi Maya :) Glad to have you here.
Thanks for having me.

Now, to start, what inspired you to write the "A Vampire’s Tale"?
Parts of this story were inspired from a number of different personal experiences and perspectives. Overall, when I started writing A Vampire’s Tale, I was in a dark place. Literally. For an unknown reason, my blood pressure had dropped significantly causing me to faint several times. I was confined to my bed for almost a week with these symptoms, unable to stand without my world fading to black. From that darkness, my characters emerged.

How would you describe the story to someone who hasn't read it yet?
In a word. Atypical. The story is a paranormal romance novel about a vampire, but it isn’t your mainstream vampire story. Corgan Halton is ancient and ready to end his unnatural existence. He seeks out Marisa Clements, a paranormal romance author, to write his life story. His presence in her life propels her into a world filled with danger in a high intensity adventure toward their shared destiny.

What do you think makes Corgan Halton appealing? How about Marisa Clements?
Corgan is an enigma. Undead yet yearns for death. Uses humans for food yet saves their lives as atonement. Endangers Marisa’s life by his presence yet vows to protect her. Corgan has a brooding presence, deep inset feelings buried far beneath the surface. He is handsome and mysterious. He is drawn to Marisa by some invisible force – destiny? – and, against his dark nature, is very chivalrous.
Marisa is a relatable character. She has sacrificed much to follow her dreams, but still perseveres. Her dedication to her craft, despite the huge personal cost, is admirable. Her appeal is in her independence and her human vulnerability.

How did you create your characters? Were they inspired by real people?
Bits and pieces of every character I create is definitely inspired by real people. Real people and real experiences. I see significant parts of myself in Marisa – from her chosen career to her determination and stubbornness. Corgan’s protective streak is inspired by my husband who has the tendency to coddle me. The villains, actions and traits, come from personal experience as well, vile co-workers and the conformity of the establishment.

What scene did you have the most fun writing? Why?
My heroine Marisa has found herself cornered by two men with malicious intents when my hero Corgan literally swoops in to save her. Then he scoops her into his arms and flies her to his lair.
Corgan’s dramatic rescue made this scene fun to write. The threat of danger, the suspense triggered by the unknown outcome was a switch from the scenes primarily with Marisa alone.

Lost in thought, the last half of her coffee had grown cold, and she didn’t want more, anyway. The coffee shop was deserted except for the lone attendant. It must be later than she realized. Her stomach churned, and something akin to fear gripped her. She had the strangest notion she had to go home. Now. Leaving the mug on the table, she walked out of the restaurant without a second glance. Her step quickened as she heard frightening sounds in the darkness. Almost home. She sighed. Two strange men, with dark hoodies concealing their faces, stepped out of the shadows. “Where are you off to in such a hurry, pretty lady?” She ignored the speaker and continued walking. “Hey, we're talking to you.” The largest man of the duo blocked her path while the other grabbed her by the back of her neck and yanked her into the alley. Every fiber of her being wanted to flee. “Let go of me,” Marisa demanded. “Not until we've had some fun.” She tensed and clenched her fists. “Maybe you didn't hear me clearly before, asshole. I said let go!” The man in front of her pulled out a knife, the metal reflecting in the dim light of the moon. Heart racing, she struggled against her attacker, trying to kick her way free. “The lady doesn't want to play tonight, fellas. I suggest you find a new friend.” The man behind her released his grip, and the two thugs inched away from her. “Hey, man. We didn't mean any harm.” Corgan stepped in front of her and waved his hand in the air. “You were never here. You never saw me. If you ever see this lady again, you will run away from her and won't know why. Am I clear?” They nodded blankly. “Then go, before I change my mind.” Marisa fell into Corgan’s arms as her would-be assailants dashed down the street. Sobs racked her as she shivered uncontrollably. “You saved me.” “I should've been here sooner.” Holding her tightly, he stroked her hair. “Nothing will ever harm you again.” Surrounded by the safety of his strong arms, she had complete faith in him. She leaned into his embrace and sighed. “Do you trust me?” he asked. “Yes.” “Hold on.” He scooped her up in his arms and floated into the air. His black cape swirled around him as they rose higher. Then they soared over the city, high above the buildings. “Wow. I had no idea.” As he flew through a wet cloud, she snuggled closer. “Don't drop me, okay?” He chuckled, a deep and throaty sound, as if she amused him. “I'll try not to, little one.” “Well, try hard, mister. I'm too pretty to fall from the sky and smash on the sidewalk.” “Yes, it would be a shame to mar your pretty face.” Returning below the clouds, he lowered them onto a curved, marble balcony. With a wave of his hand, the double French doors swung open. Light from many flickering candles illuminated the room. “Where are we?” “My place.”


Why do you write paranormal romance?
I love romance novels so writing romance was an easy choice… I didn’t set out to write paranormal, but I’ve always enjoyed science fiction and fantasy so it ended up being a good fit. Writing paranormal allows me to stretch my imagination and gives me freedom, leeway from the constraints of reality.

How did you start writing?
I was always scribbling something down on scraps of paper, notepads, paper towels when I was a kid. I wrote everything from short stories to poetry. It makes sense that an avid reader with a very active imagination writes. I traded writing fiction for term papers when I went to university. Post-graduation I took a couple of creative writing classes for leisure, but it wasn’t until I connected with an online writing group in 2010 that I began to seriously write again.

Did you always want to be an author?
Yes. Unequivocally yes! One of the most consistent “what I wanted to be when I grew up” careers, abandoned for a practical education and regular pay cheque. You can quiet the voices for a while, but they keep returning.

Does your family read your books?
No, paranormal romance isn’t their genre of choice, which is fine with me. My husband read A Vampire’s Tale and it was the most terrifying week of my life. It was the first book he ever read of mine (I’ve known him for over twenty years) and he’s not exactly a romance fan. He loved it… better praise could not be garnered as my husband believes in “shoot from the hips” honesty.

What did you read as a kid?
I absorbed books when I was a kid. I read everything from the classics – Nathaniel Hawthorne, Charles Dickens – to Nancy Drew, Sweet Valley High, and The Babysitters Club.

Can you tell me some of your favorite authors? How about books?
I read a lot, mainly romance novels – historical and paranormal. I like my fictional happily-ever-afters. Favorite authors? In no particular order… Sally Mackenzie, Karen Marie Moning, Tara Taylor Quinn… and countless others. I have many favorites and I love to read new-to-me authors too. I confess my TBR pile is pretty deep right now, both print and ebooks…
My favorite book is William Goldman’s The Princess Bride. It’s written as a story within a story about the story. Sounds more complicated than it actually is. Anyway, it’s a fabulous read. It even inspired me to start my first novel… a sequel to The Princess Bride… at age 12.

What are you currently working on?
Promotion for A Vampire’s Tale is occupying the lion’s share of my time right now. I do, however, have two projects in progress. A prequel to my first paranormal romance Dream Hunter and a sequel to A Vampire’s Tale.

A few short answer questions:
Tea or coffee? Coffee
Do you prefer the sea side or the mountains? Sea side
Sweet or salty? Sweet
Print or ebook? Both lol
Movies or TV shows? TV shows (especially Netflix binge watching)
Favorite book? The Princess Bride
Favorite author? Too many to list lol 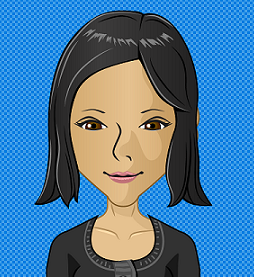 Maya Tyler will be awarding a $25 Amazon or Barnes and Noble GC to a randomly drawn winner via rafflecopter during the tour.