Genevieve Lynne grew up in a small Texas town where everyone knew each other and gossip was considered a legitimate news source. She was raised on heaping doses of her grandmothers’ fabulous cooking, sweet tea, hot summer nights at the lake and maternal guilt. Even after moving to Austin to pursue her bachelor’s degree in English at The University of Texas, she never could shake the small town out of her. She’s still working on the guilt thing.

She loves to incorporate the charm of crazy close families and small-town life into her stories. She now lives in Fort Worth with her husband and three sons. 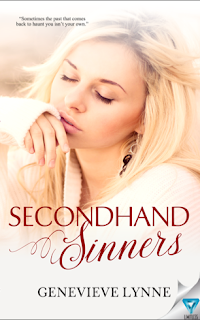 In Bokchito, Oklahoma, you know everyone and trust no one…

Emily Matthews swore she’d never expose her son Jack to her dysfunctional family that sent her running from Bokchito at only seventeen. The sins of her past still haunt her, but when her brother lands in jail, she has no choice but to go back and face her old demons.

And with the secret he’s keeping from Emily, he knows he most likely never will. But when his daughter Abby plays matchmaker to set him up with his lost love, he can’t resist the resurgence of emotion that has them reliving their high school glory days.

Evil has a way of waiting for what it wants…

Just when Emily and Miller discover their old flame hasn’t died, they learn another fire has been smoldering in Bokchito. Her family’s long line of sins, kindled with a generation-old grudge, ignites when Emily discovers the truth about Miller’s daughter and is forced to choose between protecting Miller’s secret and the one thing she can’t afford to lose…her son Jack.

Caught up in a game of lies and dirt road scandal, Emily must risk everything to save her son and preserve Miller’s good name, or let her family’s darkest secret ruin them both.
Purchase: Amazon

Genevieve will be giving away a $25 Amazon Gift Card + a Alex & Ani Bracelet! US shipping ONLY.