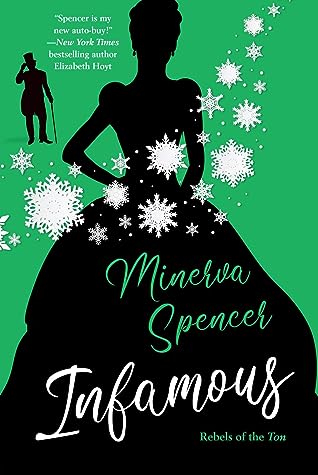 Once the reigning beauty of her social set, Celia—whom the newspapers dubbed Lady Infamous—has fallen on hard times and is practically destitute, her reputation in shreds. When Celia is forced to attend a society wedding as a companion to an elderly guest, she must confront the clique she once commanded; the gentleman she'd once hoped to marry—who is now wed to a girl Celia relentlessly taunted; and the powerful man who ruined her life a decade before—and is threatening to do so again...

Then there is Richard, the studious boy Celia used to ridicule, who is now gorgeous, wealthy, and more-than-a-little famous. As a youth, Richard was infatuated with Celia. He still seems intrigued, but Celia has acquired a shocking secret along with her hard-won humility. Will it put an end to the love blossoming between them? Does she have the courage to find out?

This was so much fun! Fans of Minerva Spencer will love it, and new to her and the series will enjoy it as well.

I like categorizing my reads, include them in different trope lists, but I can't find good ones fore this. The only one I can think of is a redemption story for the heroine, a power imbalance between the hero and the heroine(which I thought was handled perfectly) and that's kind of it. The action takes place in the week before Christmas, and there are also throwbacks to the past.

We have Celia, the heroine, who was an insecure girl, living on the edge of poverty and always being afraid of losing her place in the ton. The only thing she saw as having was beauty and she took advantage of it. She also was a queen b in the ton, always making fun of the "lesser people" and trying to land a rich, titled husband. The story takes place 10 years after she falls from her position, lower then she and everyone could have thought(I can't get into it because it's too spoilery). Now she's working as a companion/servant to an old lady and trying to make the best of it. Her plans are thrown into a spin when she finds out they will be traveling to the house of one of the women she tormented and then created a scandal of and her husband(they had to marry because of it).

Richard is the hero, also the twin of the now married couple, a naturalist and a guy who doesn't care what anyone thinks of him. 10 years a go he got picked on by Celia(though not directly and he also didn't care what anyone was saying about him) and the scheme that got her ousted from the ton was actually directed at him, not his brother. He's a nerd and proud of it, he is also really earthy and women kind of throw themselves at him. He's wealthy, handsome, magnetic and on the verge of being knighted.

He and Celia are starting to develop a friendship at his brother's house party in honor of their half sister's marriage. They are also really attracted to each other and Celia isn't sure at first if they should do anything about it.

This book has a secondary love story, between Richard's twin Lucien and Pill, the woman he's been married to for 10 years. From the outside they have the perfect marriage: she helps him in his political carrier, he asks her her advice, they have beautiful, healthy children, they are partners, but they aren't lovers. Phill is convinced Lucien doesn't love her and she keeps him at arm's length, he's also oblivious about her feelings for him, but also yearning for more. Actually, both are kind of oblivious about each other, which is funny and heart breaking at the same time.

In this story we also have a wealth of secondary characters, a lot of whom we met in the earlier books in this series, and the one before it. I loved this and after finishing the book I kind of want a story about Lucien and Richard's siblings Toni and Jeremy.

I liked how ms Spencer resolved the plot and I would have read more, if the story was longer :D What I am trying to say is that I loved the characters, the story and I wish I had more stories to read from this series and from this author.