Review: Hugo and the Maiden by S.M. LaViolette 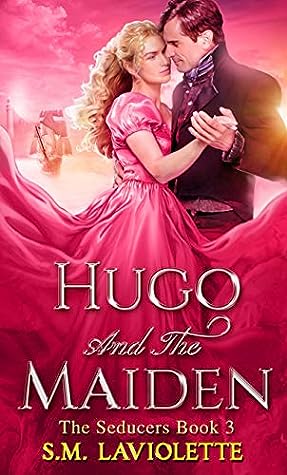 Hugo Buckingham was perfectly happy with the life he’d built for himself. With his steady clientele and co-ownership stake in the most exclusive brothel in London, he had everything he needed. But that was before. Before he was falsely convicted of a crime and tossed onto a ship to New South Wales. Before the ship went down and stranded him on the tiny island of Stroma.

Miss Martha Pringle is everything he’s not—virginal, kind, and sweet. A good person. She deserves so much better than the likes of him. But that doesn’t stop him from wanting her, needing her, with an urgency that borders on terrifying.

Now, Hugo has a choice to make. Should he go home, clear his name, and return to his old life—or stay with Martha and build a new one?

But more importantly…will Martha even want him once she discovers what kind of man he really is?

I don't even know how to categorize this book... I can just tell you that I loved it and that it was a good point to end the series.

Hugo was introduced in Melissa's book, the 1st in the series. He was an ambitious prostitute who fucked both male and female clients. Well, in this book, when he was thinking that he was close to getting everything he wanted the unexpected happened. Hugo is bludgeoned over the head and wakes up in prison and he's being deported for 7 years, and for a crime he hasn't committed too. We can say that luck is with him and the ship that carries him and other people veers off course, there's a mutiny, and some of the people on it are saved and end up on Stroma island in Scotland.

Martha is the daughter of the vicar of Stroma island. She and the people of the island save the prisoners of the capsized boat, they tend to them, they feed them and they wait for the sheriff to come from the mainland. Hugo acts like a complete bastard, but he doesn't notice when he starts to change. The life and the people of the island are changing him, and, miraculously, he's also falling in love(though he doesn't understand what's happening to him). The only thing he wants is to get back to London, to recuperate his business and for life to go back to normal.

Hugo is a bastard, he's selfish and he only thinks of his profits, but underneath this all, he's also a good man who starts to make connections. He finds out how it feels to be respected for his work ethic and all the hours he spends at his job. He's a really complicated guy and I liked seeing him change by small increments.

Martha comes off as sheltered and virtuous, and she is that, but that's not everything she is. She's adventurous, she sees the good in people and she fights for what she wants and what she believes in. She's open minded and doesn't judge people for how they had to live or what they had to to to survive.

As it can be seen, I really liked both Hugo and Martha, together and apart. There's also intrigue with Hugo trying to recoup his business and more... The secondary characters that were lovely, but the spotlight was always on those 2. We hear and see a bit of the characters from books 1 and 2 and I'm happy to read that they are having good lives.

This has been a perfect ending to the series and I can't wait to see what Ms. LaViolette comes up with next.