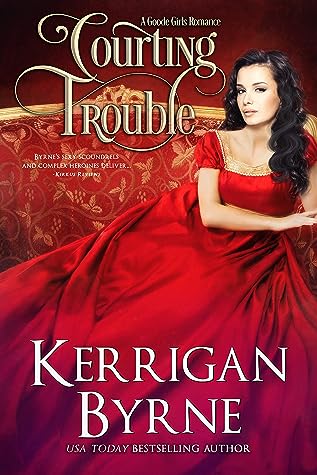 Author: Kerrigan Byrne
A brand-new deliciously wicked romance series from USA Today Bestselling Author Kerrigan Byrne. The Goode Girls are aren't simply good, they're stunning.
Doctor Titus Conleith emerged from his time as a battlefield surgeon with a mysterious fortune, a lethal secret, and a demon on his back. Ruthlessly intelligent, he was able to lift himself from his beginnings as coal-stained bastard through merciless discipline and inexhaustible skill. Alone by choice, he swore never to open his heart to another. Not after Honoria Goode. The heiress who shattered his hopes and then tread upon the shards of his heart with her bejeweled slippers. The beauty with whom he shared his first taste of passion, before she gave her hand to another.
The woman whose life he just saved from bleeding out on his table...
Honoria's life as a Viscountess has been nothing but a misery she'd brought upon herself with her own cowardice. Trapped for years in a loveless marriage to a cruel rake, she has been widowed by the consequences of his villainy. Now, she must face the man with the blazing golden eyes of the boy she once worshiped, and the dark past they both share.
As their passion reignites with the same fervor of their youth, Honoria can't help but begin to wonder...
Will he allow her the second chance she doesn't deserve?
Kerrigan Byrne always does this to me. I am saying that I'm only reading a chapter at 1 am and at 4.30 I am finishing the story...How do I get suckered every time like that? How?!
This is the story of Nora and her teenage love, it's a 2nd chance story and a bit of enemies to lovers on account of the 2nd chance part, you can imagine that angst and anger were a part of this... Honoria, Nora, is the sister of Prudence, the heroine from Chief Inspector Carlton Morey's story. The novella starts with how her husband shoots her and then we get the back story of her and Tituts, how them met, fell in love and ultimately how circumstances(and sucky people) drove them apart.
Nora is on of those heroines that's self sacrificing that you want to hate for how she always does that, but at the same time you also admire her... you still want to hit her though. She's had a very bad marriage with a petty, vindictive abuser who thankfully is killed off early on. Unfortunately her parents are also assholes, and I couldn't understand how all their daughters are so frigging nice and admirable.
Titus felt a little less developed since most of the story is from Nora's POV and she's so compelling! He's a genuinely nice guy, smart, who dedicates his life to healing people. I like how he's trying not to like Nora anymore, after 10 years that they've been apart, and he can't just make himself not not care, it's not in his nature.
Besides the main characters, the secondary ones made me like the story the most: Pru's and Nora's twin sisters are a blast and the intriguing guys at the climax of the story made me wish for their books as well... And he wan't ignore Carlton(A Dark and Stormy Knight/Seducing a Stranger) or Dorian Blackwell, the Blackheart of Ben More(The Highwayman) they and the sisters steal the scenes they appear in.
From the start I said I couldn't put it down and obviously I can't wait for the next story. If you're in the mood for an angsty read with great characters pick this book up!
Rating: