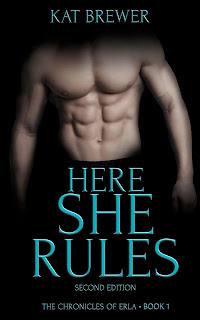 Here She Rules (FREE with Kindle Unlimited)
by
Kat Brewer

*A world where fantasy and adventure meet sizzling romance.*

A trans-dimensional rift takes Cassandra Powell to a foreign world where she finds herself in the country of Erla—a Queendom ruled by women. After saving the life of Erla’s Queen, Cassie finds herself elevated to a position of power in the new world she discovers she can never leave. She is bestowed honors and a bevy of beautiful male slaves, who live to serve her every desire.

She soon finds herself at war with brutal enemies as well as with herself as her entire view of life and what is right and wrong undergo a dramatic transformation. Determined to make a place for herself in this new world, she learns to embrace her situation, discovering the pleasures to be found in the arms of the beautiful men that now belong to her, body and soul. 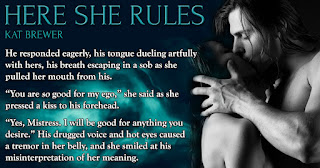 
I, Kat Brewer, am a Santa Cruz, CA native who now resides in rural South Alabama. What I write actually comes as a surprise to me for the most part. There are these moments of inspiration which kind of explode, and I just have to write them down! I am really just an average woman trying to make it. I love my very patient husband and my family more than anything else. I don't have any kitschy hobbies, nor have I traveled as much as I would like, but I've been told I have a great imagination!