Spotlight: May Your Heart be Light by Sandy Lender[+giveaway] 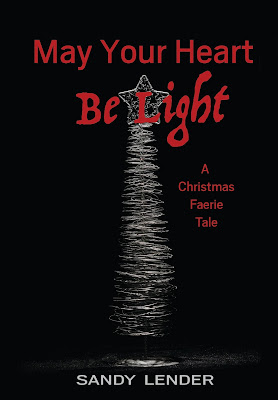 After graduation from business school and escape from engagement, Jennifer DeVision wants peace on earth for the holidays. Joining friends at the Rose Chateau seems like the calm answer to a question she hasn’t asked.

When the mysterious owner of the bed-and-breakfast begins to bring out more than the Christmas spirit in Jennifer, the forces that have been holding her in check get angry. Caleb Odan and his enabling staff of merrymakers might turn this vacation back into the romantic and magical time it’s supposed to be, if they can figure out what they’ve invited into their midst before it threatens both Jennifer and Caleb’s existence.

That didn’t seem the right way to go to get out, but she headed toward the sound, turning a corner into a section of dark leather book bindings that promised ageless stories. She took them in with a look of appreciation as she passed by the shelf. One gold-embossed title leapt out at her as she walked by—How to Restrain Faeries for Generations.

“Hello,” something whispered back.

The voice seemed to be directly behind her, yet came from the balcony of bookshelves above. She spun and backed away from nothing, expecting to see an ugly, deformed servant to match the breath that raised the hairs on her neck. She looked up, exposing her neck to the evils of the spirits that lurked in the library.

The balcony appeared to hold only shelves and tables straining under the loads of more books. Whether it was the uncomfortable feeling of someone watching her between the book bindings in the stacks or the confusion of thinking she heard a whisper, she shivered at the thought that the balcony could be old enough, the wood could be rotted enough, to collapse under all that weight. She stepped back cautiously, still looking up, not seeing or feeling the wispy tendrils of vapor sighing up through the floor at her feet.

That voice was solid, real, and seemed to chase all the ghosts back into hiding. She shook the faerie visions from her head and gulped back the fear lumped in her throat. “Over here,” was all she trusted herself to say.

When Caleb stepped into view alongside old books of mysticism and mystery, she gasped. He looked the part of some wealthy landowner taken out of another time come to pull her back to that age. He held out his hand to her and the ruffles at the base of his shirt sleeve peeked out from his jacket to speak of fairy tales meant to entice ladies such as herself into illicit liaisons. She didn’t accept his hand. Instead, she looked into his eyes, questioning the scene.

He smiled kindly. “No doubt you’re recalling the ghost stories about this mansion, about this library?” he suggested. “Come, I’ll tell you the real story around the dinner table.”

She noticed that he tossed a menacing glance over his shoulder as he led her back through the stacks, and she wondered who cowered under that chastisement. If the sight of the handsome man hadn’t already sent the dragonflies fighting for flight space in her stomach, the feeling of being under his protection certainly would. What a silly notion, she thought. 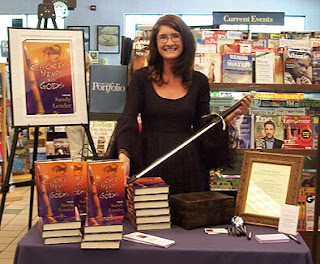 Sandy Lender has a 23-year career in journalism and public relations. She teaches media training to university officials and corporate CEOs, but also has a keen understanding of online marketing. She taught how to use social media for one’s business at the 2011 CONEXPO/CON-AGG, which is the largest tradeshow in the United States. She also presents workshops on writing, editing and the surprising topic of reptile husbandry. Lender is a sea turtle conservationist and published fantasy author anticipating the release of her final Choices novel this winter. While we await Choices Meant for All, she’s offered the spine-tingling yet amusing paranormal holiday romance May Your Heart Be Light. Check her out at https://www.facebook.com/FantasyAuthorSandyLender.