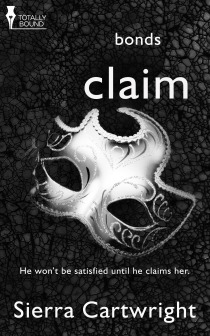 
Four men. One powerful bond. Rich, powerful, eccentric, Julien Bonds knows what each of his friends needs, and he's determined to see they get it.

It had to be her. He won’t be satisfied until he claims her.

When they meet, he’s entranced by her intelligence and submission, not to mention her stunning good looks. For the first time, he has met a woman who captivates his interest on every level, someone he wants to share his life with.

Mackenzie is overwhelmed by Kennedy's attentions. A failed marriage taught her to distrust men, and she's vowed never to walk down the aisle again.
It takes all her resolve to resist the devilishly handsome dominant. After all, the whole world knows of his legendary reputation with women. Every feminine instinct warns that this man will demand more than she can offer.

But she hasn’t counted on Kennedy’s determination to claim her and prove that love is worth any risk.

This was soooo good. I couldn't put the book down, not joking!

Kennedy is an amazing dom and human being and I totally want him al for myself :D He is a bit pushy and he's excellent at being sneaky and seductive and, seriously, I want him all for myself :D

I liked that Mackenzie didn't let herself be pushed around by and didn't give in to his high-handed demands(I totally would have :D). She's a bit emotionally stunted, but in the end she sees the light.

The sex scenes were really hot. I could feel their chemistry from their first meeting. There were no awkward fumblings for them. With every scene they got closer, despite Mackenzie's wish that it wouldn't happen.